Hendrick Motorsports driver Johnson was due to be on track Sunday for the prestigious Indianapolis event.

But on the same day that another driver in an American series – Brazilian Felipe Nasr – had to withdraw from his IMSA prototype seat at Daytona, NASCAR confirmed Johnson has tested positive for the virus.

Johnson has not showed symptoms, but was tested after his wife had a positive test.

“My first priority is the health and safety of my loved ones and my team-mates,” Johnson said.

“I’ve never missed a race in my Cup career, but I know it’s going to be very hard to watch from the sidelines when I’m supposed to be out there competing.

“Although this situation is extremely disappointing, I’m going to come back ready to win races and put ourselves in playoff contention.”

Johnson’s replacement for this weekend, Justin Allgaier, has a best finish of third in NASCAR’s second tier Xfinity Series and is a regular for the JR Motorsports team affiliated to ex-Hendrick driver Dale Earnhardt Jr.

Allgaier has a 76 Cup starts, with a best finish of eighth at Bristol in 2016, although most of his Cup starts have come with small teams.

Johnson appeared on a NASCAR teleconference with media on Friday, discussing the weekend ahead but also his upcoming IndyCar test with Chip Ganassi Racing. 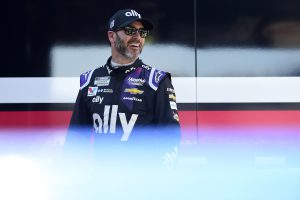 He was due to test with Arrow McLaren SP in April at Barber Motorsports Park but that test fell through due to the lockdown following the outbreak of the coronavirus.

Now it seems Johnson will miss a second test, which was due to take place on the Indianapolis road course next Wednesday as he evaluates what he will compete in next year following his retirement from full-time NASCAR competition.

NASCAR has confirmed that it has given Johnson a playoff waiver. Drivers have to compete in all events to be eligible to enter the playoffs and fight for a championship.

It has also outlined the criteria for his return.

“Following the guidelines outlined in the Event Operations Protocol manual, Jimmie Johnson has alerted NASCAR that he has tested positive for COVID-19,” said a statement by NASCAR.

“NASCAR has outlined the steps for Johnson’s return, in accordance with the CDC’s current guidelines, which includes that Johnson is symptom free and has two negative COVID-19 test results, at least 24 hours apart.

“NASCAR requires Johnson to be cleared by his physician before returning to racing.

“Jimmie is a true battle-tested champion, and we wish him well in his recovery.

“NASCAR has granted Jimmie a playoff waiver, and we look forward to his return as he races for an eighth NASCAR Cup Series championship.”