The 46-year-old had three stints as a Minardi driver in grand prix racing but only got one season in full-time capacity, partnering Fernando Alonso in the future two-time F1 champion’s rookie campaign.

Alonso actually finished behind Marques in the 2001 standings owing to the latter’s pair of ninth-place finishes, but pretty comprehensively outperformed the Brazilian – who made way for Alex Yoong with three races to spare in the season.

His racing career was sporadic since his F1 exit, but Marques did make himself a frequent Stock Car Brasil competitor (and two-time race winner) later that decade, before most recently appearing in the series in 2018.

Pivoting from his racing career to car renovation and customisation, and the building of a TMC sports car prototype that was unveiled in 2020, Marques had an extremely severe of case of COVID-19 last year that led to cardiac arrest and 11 days in intensive care, according to an interview with Brazil’s UOL Carros.

Following his recovery, he will now be Team Stange Racing’s driver in its first foray into NASCAR’s Cup series and “other series to be announced”.

Tarso Marques (@marquestarso), a Brazilian racing driver who has competed in 24 Formula One Grands Prix races, will be our driver in the NASCAR Cup Series races and other series to be announced in 2022. pic.twitter.com/26pXb7zYJV

The outfit, owned by Chicago entrepreneur John Stange Jr, will have its entry fully financed by crypto-oriented company Dignity Gold, which the team says “paid the entire sponsorship in tokens”.

Team Stange’s previous high-profile racing effort was an Indianapolis 500 entry in partnership with what was then Arrow Schmidt Peterson. Oriol Servia finished 22nd in its car. 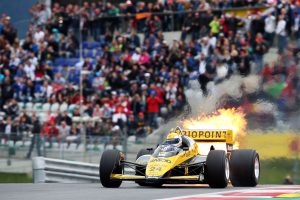 In NASCAR, Marques is make his debut in the July Road America race, before tackling three more road courses and four ovals, including the season finale in Phoenix.

He has oval racing experienced from miscellaneous stints in CART/Champ Car spanning 1999-2005, primarily with Dale Coyne Racing but also including six races with Penske during its troubled 1999 season.

Since NASCAR has a charter system open to full-time entries, Marques will presumably need to qualify his way into the race in any events where the number of entries exceeds the maximum allowance of 40 cars.

Daniil Kvyat's recent visit to a NASCAR race wasn't just tourism. He's got serious ambitions in that direction, as he explains to Valentin Khorounzhiy