All eyes are on NASCAR’s return, but is it too soon?

There’s no doubt all eyes will be on America this week as NASCAR takes to the track on Sunday and marks a return to real-life racing for major motorsport.

It’s been a long time in the planning, and comes amid what can only be described as a political war in the US, as the majority of the Republican Party push for the reopening of businesses to re-stimulate and save the economy, while the Democrats lean towards a more standoffish approach in fear of the virus and its effects on the human race.

It is difficult in a country the size of the US – each state having a governor with powers of its own as well as the President overseeing everything himself – to have decisive leadership. While China – where the virus originated – has gone a month without a death, the US is still rising at 87,000 people lost.

China locked down relatively early, whereas the US has not presented a nationwide united front on the best course of action, and most places that have locked down are now lifting those restrictions relatively early in comparison to the rest of the world, with the notable exception of California which remains shut until at least June.

As well as the political debate, the partisan news outlets are also arguing over the figures and how seriously they should be taken.

In the most difficult of situations, NASCAR has shown its usual impressive decisive leadership in charting a route back to on-track racing – via an extremely successful and well produced esports series – to race at Darlington and Charlotte over the coming weeks.

About that number – over 600 – will rock up to Darlington on Sunday. OK, there will be no spectators, but each team is allowed 16 people (including driver, team boss etc).

With 40 cars, that’s 640 team members, before you’ve added track and NASCAR staff. The real number of is probably going to be closer to 800. 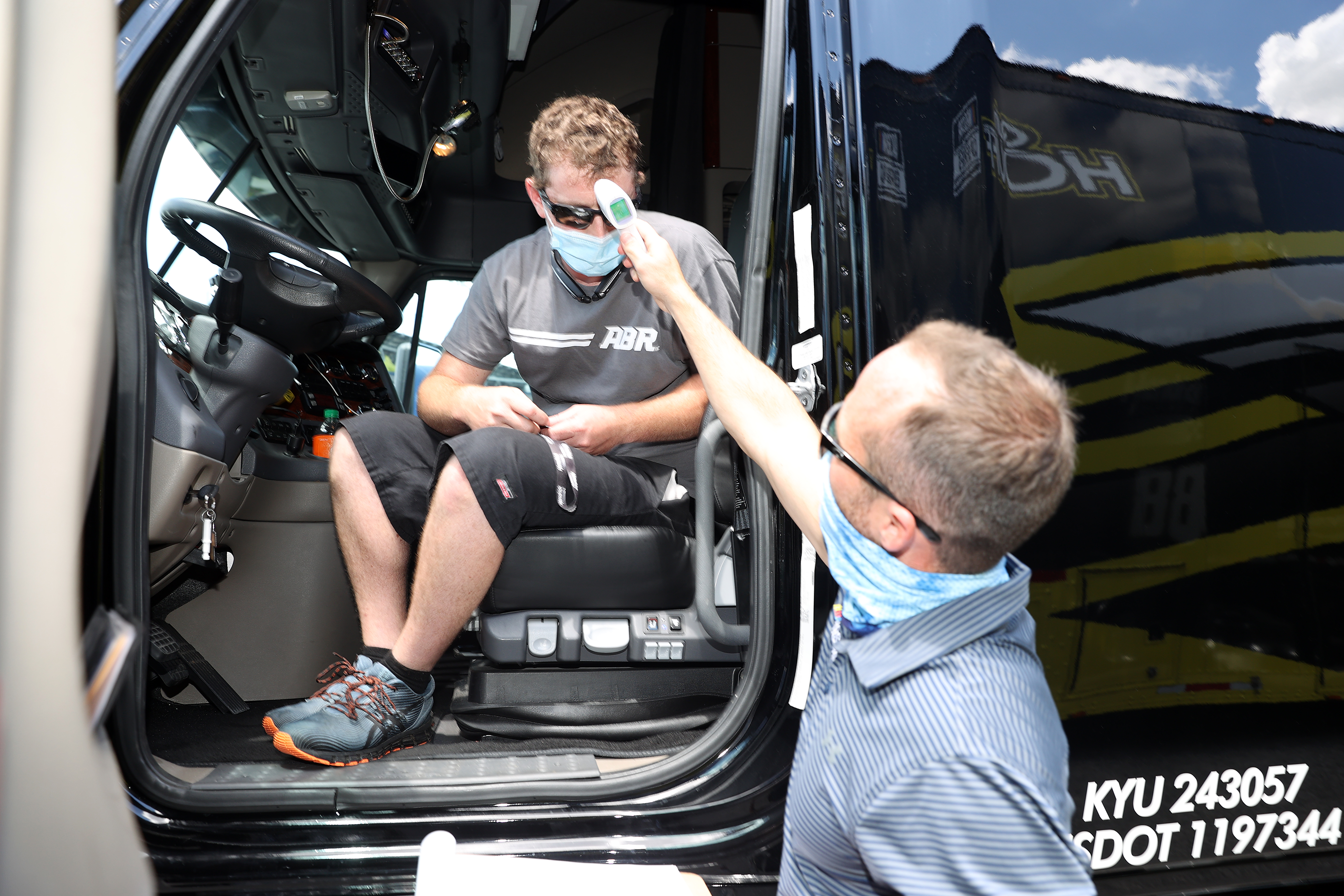 Even with the strictest of measures, bring 640+ people into a circuit in May – just after restrictions have been lifted in many states and humans begin to intersperse with one another once more – is, in this writer’s humble opinion, unnecessary, to put it politely.

The NASCAR fraternity may be pigeonholed to North Carolina for the most part, but it only takes one person to upset the apple cart and introduce coronavirus to a group.

Sports like football are returning, but Germany’s response to COVID-19 has been far more united and has benefitted from strong leadership. What remains so scary and constantly raises questions about how seriously to take the virus in the US is the conflicting reports about it, and President Trump’s bewildering addresses that undermine any hard work and common sense being implemented behind the scenes.

But with all that said, those 640+ people attending Darlington this weekend have livelihoods, and the upcoming track activity is impacting the futures of many more people who should eventually return to the track to continue their NASCAR-related careers.

With over 30 million people currently unemployed in the US, many families are going to be in a fight to survive. I appreciate the need to put food on the table and how NASCAR – like any other business – returning is important economically. But this is still too soon to risk lives.

With or without my opinion, NASCAR will race this weekend.

“I would say first considerations are the state and local trends, whether restrictions have been eased in a way that allow our event,” said NASCAR Vice President of racing operations John Bobo following the announcement NASCAR would return.

“We want to go into communities where we know we’ll be welcomed and be good guests.”

NASCAR Executive Vice President and Chief Racing Development Officer Steve O’Donnell added: “When you do look at other sports, we do look at – we’re an outdoor sport, we do have drivers with helmets, we are in race cars.

“There are some unique things about our sport that we did feel like provided us the opportunity to get back if we could, to John’s point, where we knew we were going to be safe. That was first and foremost during our decisions.

“If we didn’t feel like we had the support of the local community, health officials, the state, you wouldn’t see us racing till November. That was a key for us, to make sure that was in place.” 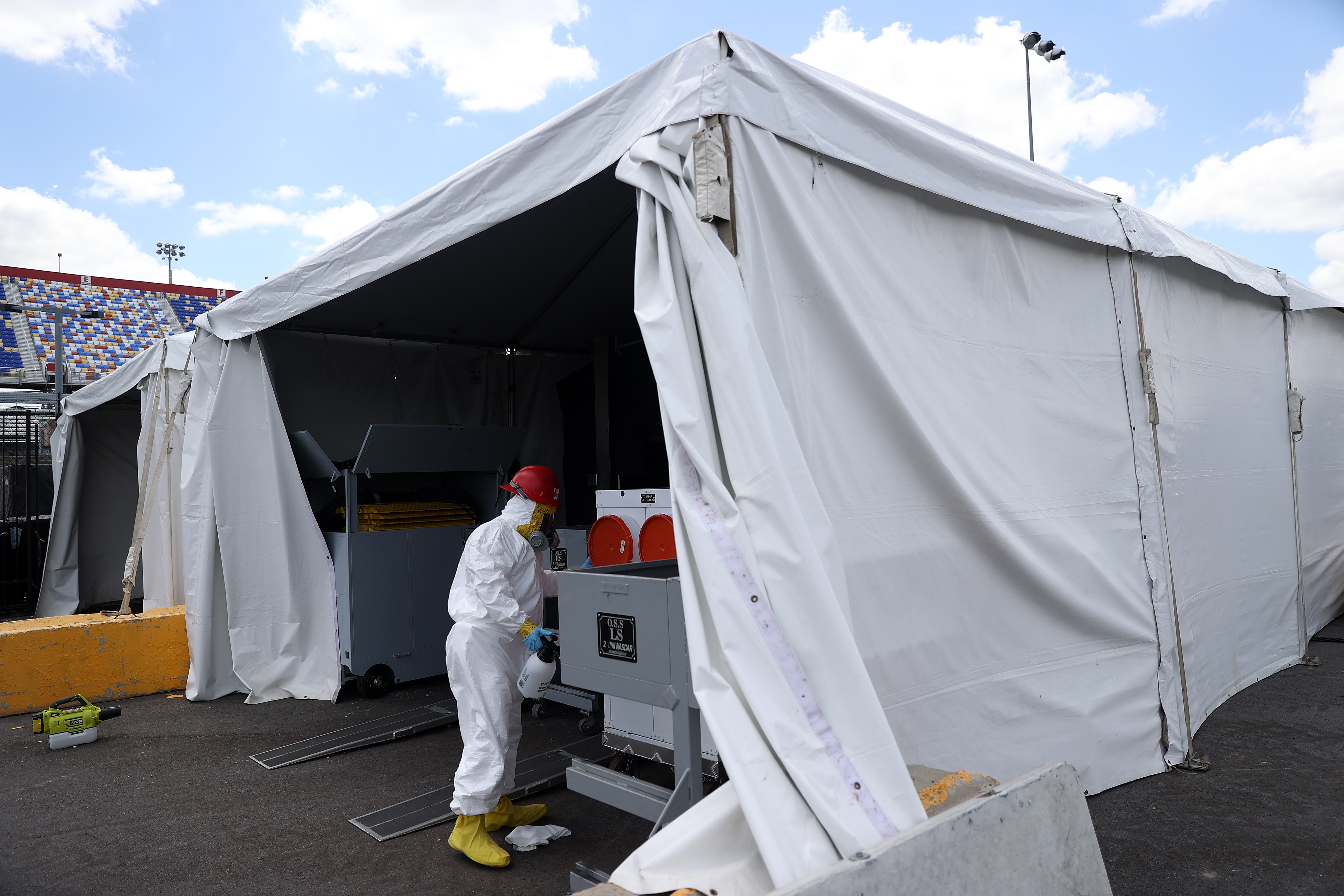 So, what measures is it taking to ensure a safe environment will be maintained?

While some people have scoffed at America’s reaction to the coronavirus, NASCAR’s approach couldn’t have been more serious.

No measure it has taken makes me comfortable with the fact that we are supposed to get excited about racing returning while many people are still dying from this virus, but NASCAR must be commended for the initial steps it has taken and the consultation into best practice it has investigated ahead of this weekend’s return.

“Early on in March we realised we needed to be smarter about the coronavirus,” said Bobo.

“[We] engaged with an infectious disease physician and epidemiologist. Also worked with a number of other consulting physicians in emergency medicine who are actively treating COVID patients right now in development of this plan [to return racing].

“We continue to be in conversations with public health officials in South Carolina and North Carolina. We realise that as we are guests in each community, as we prepare for these events. We’re going to keep a close eye on the trends as they develop, knowing our plans can be contingent on those events pandemic related.”

Giving an address on Friday, President Trump said that he expected a vaccine would be found by the end of the year for COVID-19. Some industry insiders think that’s achievable but others are less sure.

NASCAR has clearly taken the idea of testing extremely seriously while this vicious virus spreads. It understands the risks and is approaching the return sensibly and thoroughly.

That was evident in Bobo’s media statements, where he set out testing details in his opening remarks. 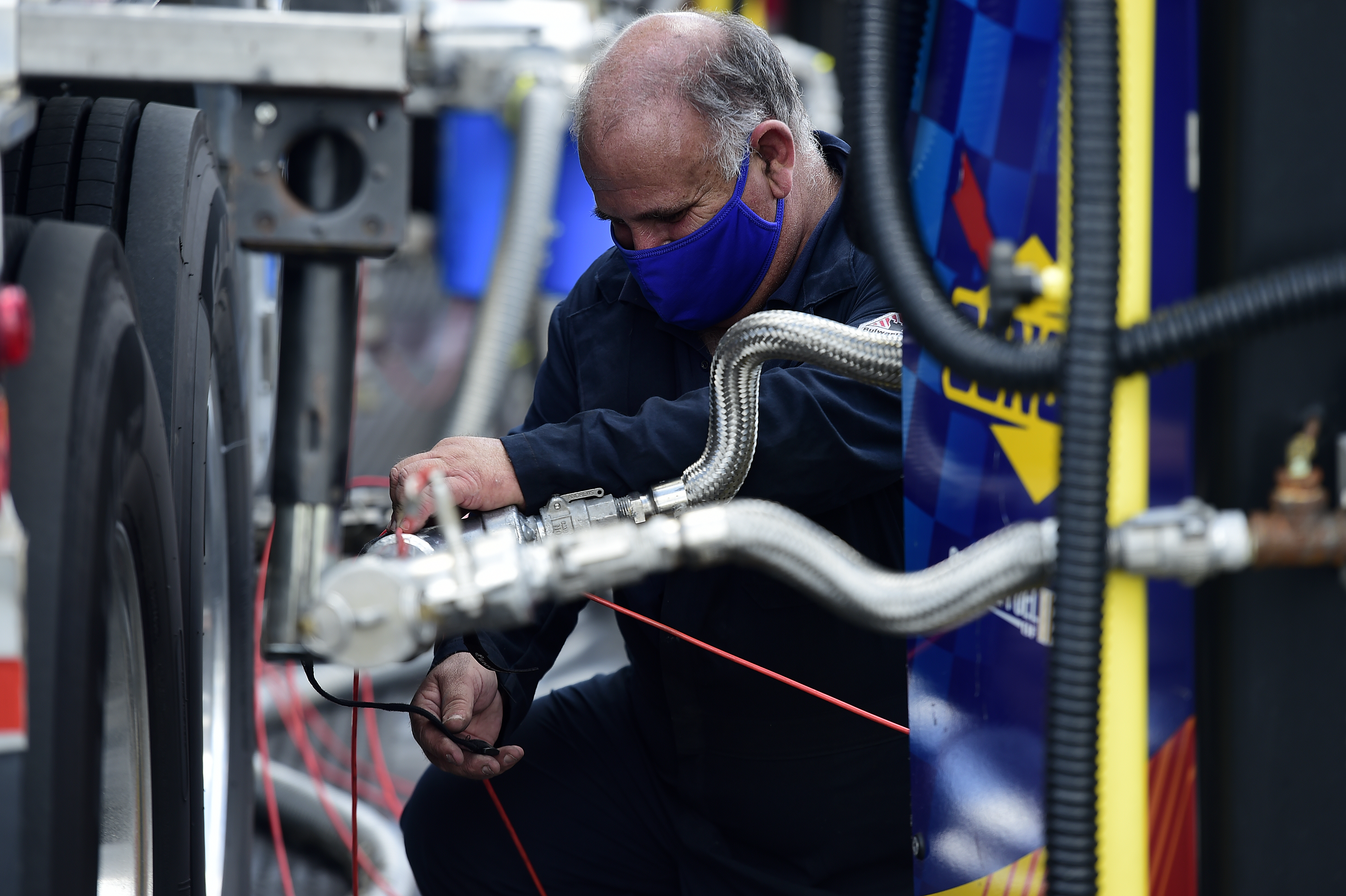 “I want to talk about testing because I think it may be a question that comes up on COVID-19 testing, those tests remain in short supply,” said Bobo.

“Getting results can take two to three days. Really those tests should be targeted for people most in need.

“On the antibody testing, we believe that is still being developed. Our experts are still unsure about what it means. There are four coronavirus strains, not the novel coronavirus, but the others. Immunity is maybe three weeks to six months. Our experts are not able to tell us what that immunity may or may not mean. We remain curious about it and are going to maintain vigilance on that and watch as those tests improve.

“We’re interested in antigen testing, see that as something we can implement in our program at some point. Again, we’re waiting on further development and FDA approval.

“Contact tracing – we are asking teams and participants to keep a log of who they’ve interacted with throughout the course of a day so if we have a positive post-race we can figure out who they were in direct exposure with and ask those people to isolate for 14 days.

“We do plan to move to contact tracing software when that is further developed in a more reliable platform that can work state to state as we use it.

“We have a lot of confidence in our plan. We know we have to work together as an industry to keep our own folks safe, to keep each community safe. But it is the discipline and the safety culture of NASCAR.

“We’re the organisation that puts cars on the track four days a week at 200 miles an hour. We think it’s that same discipline and eye towards safety that everybody in our industry has that is going to help us execute on this.” 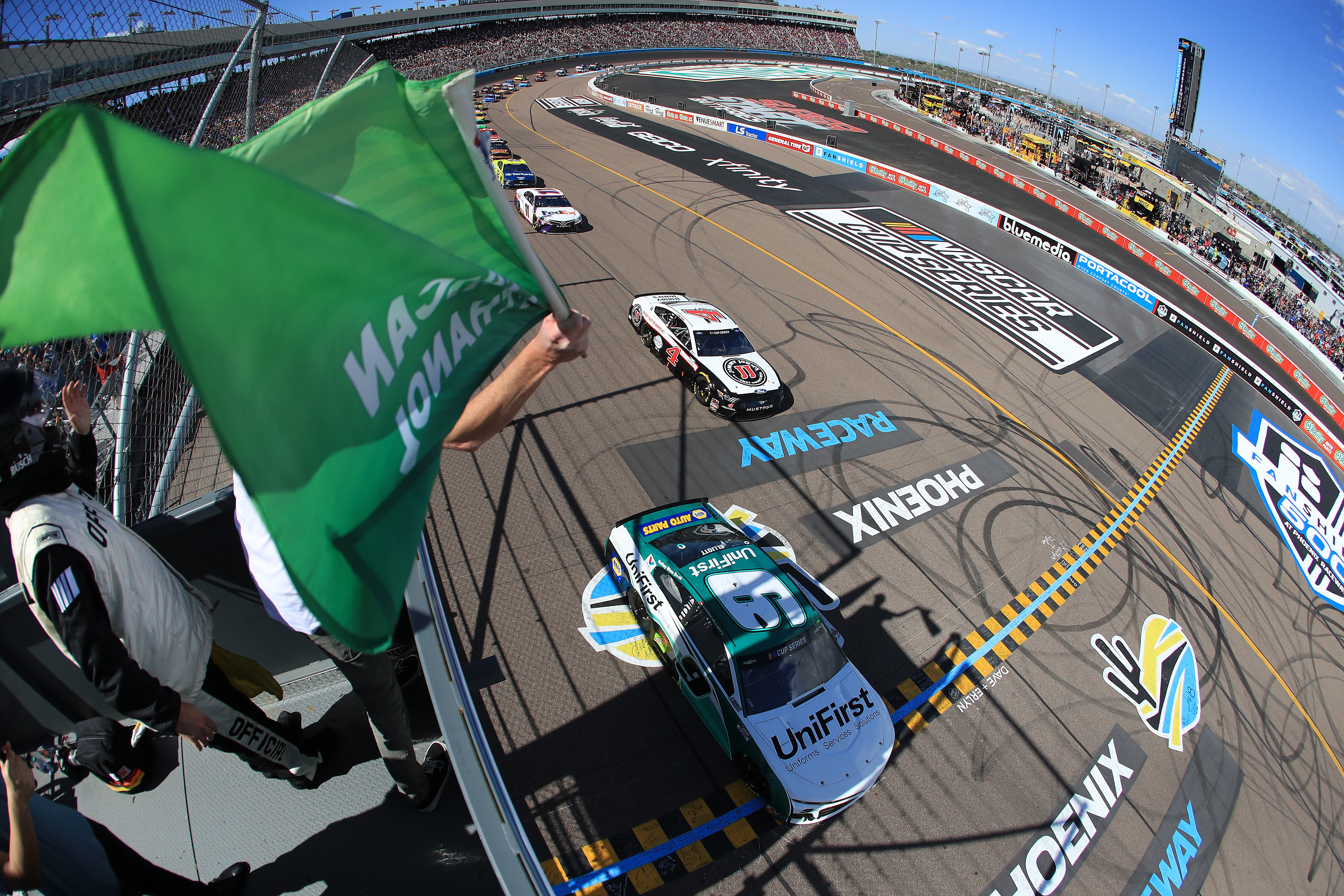 A lot of the speculation surrounding sports returning is focused on its specific business model, and with motorsport, that’s TV revenue v spectator entrance fees. NASCAR tracks reportedly take 65% of the TV coverage money, and at most tracks that will be well over half of the income from that event, with other revenue being ticket sales, sponsorships, merchandise etc.

So the biggest form of income is the TV coverage, which obviously remains and is increased while races are behind closed doors. NASCAR has explained its coverage plan here, and if you’re watching in the UK you can watch on Premier Sports TV, which has a player on its website or can be watched through Sky.

NASCAR and O’Donnell understand that a lot of people will be watching NASCAR as it returns.

“I think it’s a big factor in terms of getting it right,” said O’Donnell.

“We realise upfront it’s a huge responsibility for us as a sport.

“But I’m also confident in the group we’ve gathered to put this plan together. Our entire industry has come together to believe in the plan we’ve put together.

“We’re certainly going to learn as we go. But the process we put in place I think gives the industry the confidence that we can be first, we can do this in Darlington.”

Sunday’s event is aptly named the Real Heroes 400 in honour of the healthcare front-liners fighting COVID-19.

Many teams have named their cars after people in the healthcare industry and many are using Sunday’s event to fundraise in different ways. That’s something everyone can get behind in this controversial and unusual time.

As the attention of the motorsport world turns to Darlington on Sunday night, NASCAR cannot afford to get things wrong. Even one positive case within the paddock could prove catastrophic.

But if its return is safe, it may go down as strong NASCAR leadership that saved hundreds – if not thousands – of livelihoods.