Yet another injury blow for Marquez as infection discovered

Marc Marquez is facing yet another setback in his battle to recover from the broken right arm he suffered at the opening round of the 2020 championship back in July.

The Honda MotoGP team has announced that he will remain in hospital in the coming days as he battles an infection discovered following additional surgery carried out this week.

Marquez underwent a significant operation on Thursday to have a piece of bone grafted from his pelvis to his right humerus, in an attempt to repair the damage done not only in the initial crash at the Spanish Grand Prix but also when he attempted to ride again only five days later.

A brief Honda statement confirmed the potentially catastrophic news of an infection at the injury site.

“Marc Marquez’s post-operative clinical situation has been deemed satisfactory by his medical team at the Hospital Ruber Internacional, in Madrid,” Honda said.

“However, the cultures obtained during the pseudarthrosis surgery have confirmed that there was a previous infection in the fracture, which will see Marquez undergo specific antibiotic treatment in the coming weeks.

“Marquez will remain at the Hospital Ruber Internacional, in Madrid.” 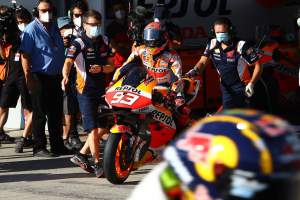 With the bone grafting procedure a relatively straightforward but nonetheless potentially risky one, an infection is bad news as it could well lead to his body rejecting the fresh piece of bone moved from his pelvis in Thursday’s eight-hour operation.

The news will mean a further delay in Marquez’s attempt to return to MotoGP action.

He’s already facing at least 12 weeks of immobilisation ahead of physiotherapy and with the start of the new championship only 16 weeks away, it seems increasingly unlikely that he will be on the grid for the 2021 season-opener in Qatar.