It was a big shock when, in 2018, Vinales moved on from the experienced Forcada, a crew chief who’d enjoyed massive success while being by the side of Vinales’ predecessor Jorge Lorenzo.

It looked like that success would translate into big success with Vinales, too. Once Lorenzo had his head turned by Ducati, Yamaha signing Vinales as his replacement from Suzuki was a no-brainer and a coup.

He dazzled immediately on the M1, blisteringly fast right away in Valencia post-season testing in that striking special livery.

But you know the story there – he won his first two races with Yamaha, and from that point until now that’s as good as it got.

As the initial promise faded and frustration mounted, a decision was taken in mid-2018, by someone. Forcada hinted heavily that “someone” was Vinales, Vinales himself said it was more of a collective decision, but in any case, it was clear what the rider preferred.

Forcada bounced back with a role at the side of Franco Morbidelli at Petronas Yamaha, and that has worked out nicely. But there was never any indication that Vinales regretted making the move for Garcia, the crew chief that helped him with the Moto3 title.

This is why the news this week was such a surprise, even though Vinales’ form in 2021 so far has clearly not been up to par. Vinales is known as an emotional guy – perhaps he’d made the call out of desperation?

“It changes a fair bit. That’s the heart and soul of your team there,” said Ducati’s Jack Miller when asked to comment, before going on to virtually sum up the public perception of the move by saying: “It’s hard for me to justify a change mid-season like that, that’s the tough one for me. But if he feels that’s what he needs, all power to him.”

Except, not quite. Once Vinales finally faced the press, he couldn’t have made it any clearer that it wasn’t his idea to split with Garcia. Garcia, he said, was a friend before a crew chief. It was Yamaha’s idea, he intimated, and he said he understood it – but it hurt.

“Basically I think Yamaha has tried to find a different strategy,” Vinales explained. “Because sometimes for me was difficult to find the good setting for the bike, the balance.

“And for the last four races I’ve been very fast in FP1, and then went back all the weekend.

“The only thing that Yamaha wants is to provide me the best and give me the maximum, and that’s why they forced to make that change.”

Was Vinales under Garcia better than Vinales under Forcada? We have the stats, but, look, let’s be honest, it’s impossible to tell. Since arriving to Yamaha after a super-consistent Suzuki season in 2016, Vinales has Jekyll-and-Hyde’d his way through every single campaign at Yamaha. 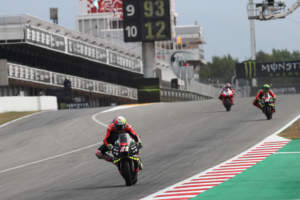 Now, was Vinales happier under Garcia than under Forcada? Surely. We only have his public word at that, but he has always spoken highly of Garcia – and when he signed that surprise contract extension on the eve of the 2020 season, Vinales emphasised how much he enjoyed having his closely-knit crew, in which Garcia was clearly the centrepiece.

This is why this is so different from the Forcada split. Then, Yamaha allowed Vinales to move on from a super-successful crew chief he wasn’t gelling with and replaced him with a hand-picked option from his past. And now, the hand-picked man – Vinales’ close personal friend, whose family he “knows very well” – is gone, replaced by a successful veteran company man, kind of like Forcada.

“In Yamaha, the headquarters is close to Monza, and Silvano worked there 25 or 30 years – before the MotoGP team was born. And he knows very well everything, and I think under this point of view can help a lot Maverick to improve.”

You can see why this move appeals to Yamaha so, even if it theoretically leaves a vacancy in the test team – which Galbusera previously oversaw.

“You know, to do this kind of change during this season is never nice. But, as you can imagine, Maverick for us is a big investment, and the results were not having the same value,” Yamaha MotoGP team manager Massimo Meregalli rather bluntly told MotoGP.com.

“And we thought that probably was a moment to do the change. We discussed internally, and a mutual decision, we decide to try. We know his potential and for us, it’s just a matter of getting it.

“The good results began [when Garcia joined], but as you know, in the last probably 18 months the results were not as good as they should’ve been. We thought it was the moment to do something different.”

Every year since that memorable post-season debut, Vinales has at points looked like he’s on the cusp of becoming that franchise rider Yamaha needs, the MotoGP giant it signed him to be.

But it’s never come together for any meaningful stretch of time – and Quartararo’s current form feels, if not already longer, then at least certainly more meaningful than any of Vinales’ own Yamaha purple patches.

Asked in Barcelona whether Galbusera’s arrival meant there would be no more excuses, Vinales said: “I never had excuses, honestly. I just had facts, and the facts are that when the bike is working and I can have the maximum and I can take out the maximum, I’m able to win the race. This is the fact.

“We have our team-mate that is winning every race, and we are doing top 10. Something is not working.

“The only thing is, what I can see, is that Yamaha has quick reaction. Very unexpected for me, and I trust a lot the team. I will trust that change, and I will trust on the way.

“At the end, the level is here, the bike is fantastic and we cannot lose this opportunity, because not every year you have a fantastic bike.

“I think Yamaha was working very hard, and they invested a lot on me, [for me] to not take out the maximum performance.”

Critics and journos may grumble with Vinales’ suggestion he “never had excuses” – what are excuses, anyway? – but otherwise, these are very smart words. And they are the words of someone who understands what’s at stake here.

Getting Garcia in was a move to make Vinales happy. Getting Galbusera in is a move to make him win. It is the nuclear option – and if it doesn’t work, the fallout will take him somewhere else, and it may be best for both sides.