Yamaha has this morning confirmed that Maverick Vinales suspension by its MotoGP team will be made permanent.

As predicted earlier this month by The Race, Vinales has been officially released before he has the chance to fulfil the remainder of his 2021 contract for Yamaha.

He was already set to leave the team at the end of the 2021 season, half way through a two-year deal, before the bombshell news that he would be suspended for deliberately attempting to blow up the engine of his Yamaha M1 during the Styrian Grand Prix.

With Yamaha’s Japanese senior management on annual holidays during the turbulent time for the race team, it was suspected that Vinales’ suspension was simply a temporary matter until such point as they could reconvene to formally decide his future.

That decision has come today, with team principal Lin Jarvis confirming in a brief statement that Vinales would no longer ride for the team effective immediately.

“In Assen Yamaha and Vinales already announced the mutual decision to cut short their original 2021-2022 programme and to finish it at the end of 2021,” said Jarvis. 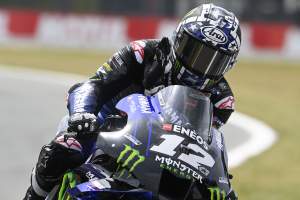 “A commitment was made by both rider and team to continue to the end of the current season, with the team guaranteeing its full support and the rider giving his maximum efforts so that we could finish the project ’in style‘.

“Regretfully at the Styrian GP the race did not go well or end well and consequently after deep consideration by both parties, the mutual decision was reached that it would be better for both parties if we end the partnership earlier.

“The early separation will release the rider to be free to follow his chosen future direction and will also permit the team to focus its efforts on the remaining races of the 2021 season with a replacement rider – yet to be determined.”

Vinales now looks set to be replaced in the medium term by Yamaha test rider Cal Crutchlow, who has previously been deputising at satellite team Petronas Yamaha for the injured Franco Morbidelli.

That opens up a path for British Moto2 rider Jake Dixon to make his MotoGP debut next weekend at his home race at Silverstone, as first reported by The Race. 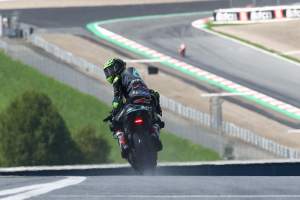 Dixon will in turn step up from Petronas’ middleweight class team to the premier class.

It also opens the way for Vinales to make an early move to Aprilia, with the Spaniard already announcing this week that he will ride for the Italian manufacturer next year.

Yamaha has confirmed to The Race that Vinales’ split with it is both effective immediately and final, potentially allowing him to make an earlier-than-planned switch to Aprilia before the 2021 season is out.