Will Oliveira and KTM come to regret their 'definitely sad' split? - The Race
Skip to content
MotoGP

Will Oliveira and KTM come to regret their ‘definitely sad’ split?

If Miguel Oliveira ever takes umbrage at being called a ‘great rider’, Jorge Lorenzo-style, there’s a ready-made retort for him. Probably not ‘I’m a champion’ – Oliveira has titles but those are a bit far removed from his time grand prix racing, albeit he did get reasonably close in Moto3 and Moto2 – but certainly ‘I’m a winner’.

Okay, pretty much every rider on the MotoGP grid is a winner of some sort, many of them already in the premier-class, but Oliveira’s now-quintet is a defining mark, statistically out of line with the rest of his MotoGP career so far – both because he’d spent all of it so far on a KTM that usually isn’t fighting for wins and because he has not established himself as KTM’s top dog except for one-off races and brief spells.

And yet, five of KTM’s seven MotoGP wins are his. He has the same amount of victories by himself as this title-winning iteration of the Suzuki programme.

He is hitting one win per 13 starts, a rate second only on this grid to three of MotoGP’s 2022 title contenders and living legend Marc Marquez. 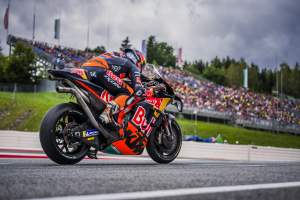 And he’s led 76 laps in total, all of them in the five races he won, meaning that when he leads he wins. Compare that to the unfortunate Johann Zarco, the opposite end of the spectrum, with 91 laps led across 12 races, none of which have yielded a win.

But Oliveira’s flashes of massive success have not been enough to prevent KTM from replacing him with Jack Miller in the factory line-up, or to prevent Oliveira from discarding an offer to ride the KTM RC16 for another team.

“It’s always nice, for sure,” said Oliveira after the wet-weather Thailand win this weekend about ending on a high with KTM.

“Also the dry sessions I have been having and the dry results have been quite promising, I’ve been able to show very good potential.

“It’s definitely sad that will end in Valencia. But I’m also happy to be on another challenge. It’s definitely a hard category now, you cannot jump into a bike and say ‘that’s a much better bike than my bike’.

“We ride behind other guys, we say ‘the other guy’s bike is so much better than mine’ but I think we just need to focus on getting the best we can from our machine and also get a good group around us that can help us do that. I think that’s the key of MotoGP nowadays.” 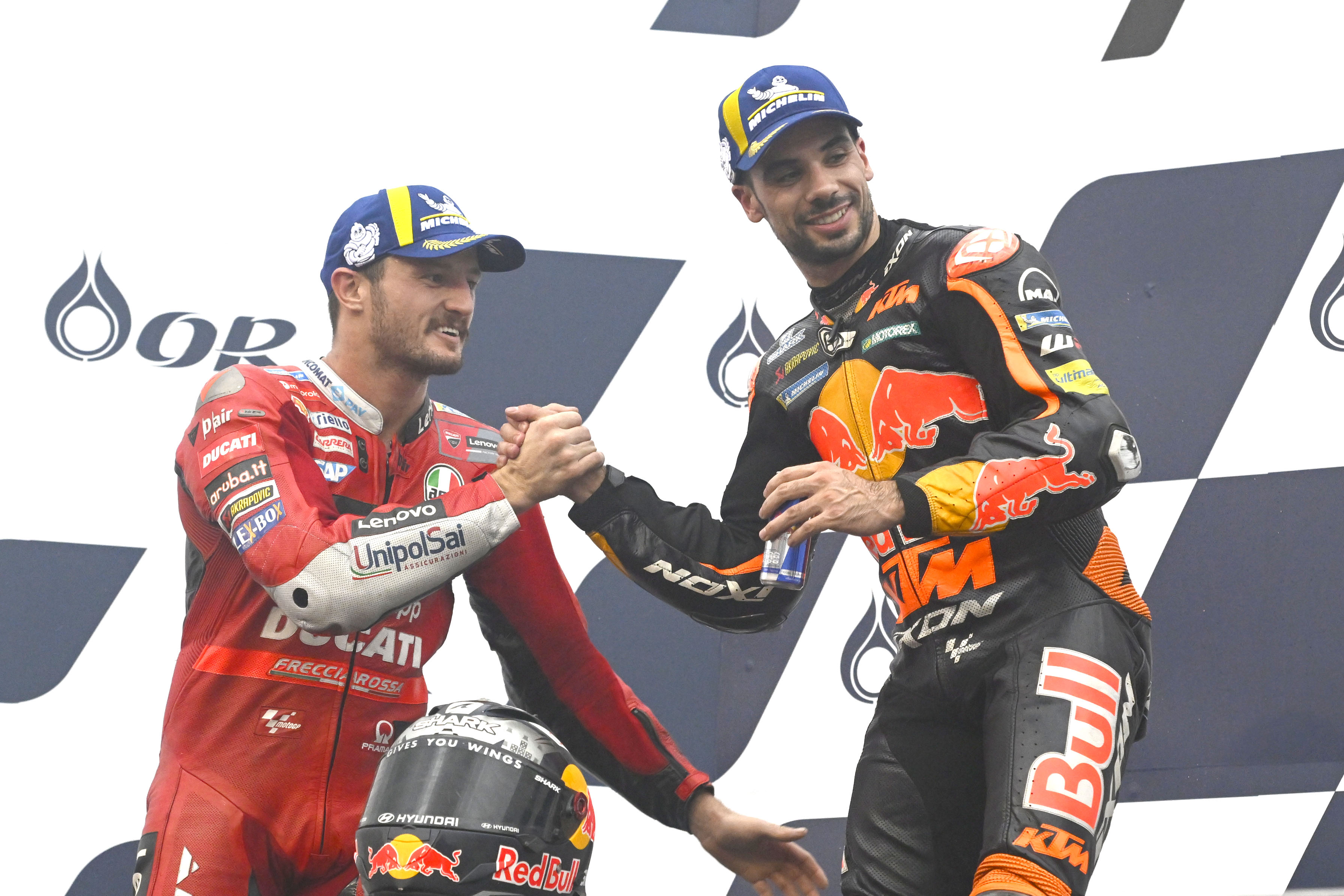 As mentioned above, the split is something both KTM and Oliveira could have avoided. KTM could have kept the Portuguese in the factory line-up, and Oliveira could’ve put pen to paper on what was reportedly a lucrative three-year deal to race for the rebranded Tech3 team, which will be the Gas Gas Factory Racing Team next year.

In the end, KTM loses the rider who has taken over 70 percent of its MotoGP wins, and Oliveira hands over an RC16 that has served him so well in moments. 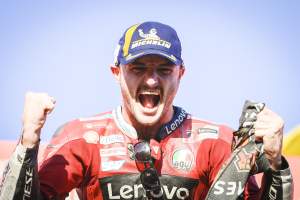 Of his five wins, the first one was a bit of last-corner chaos, but the rest have all been relatively controlled. The latest two have come in the wet, probably already establishing Oliveira as part of that top tier of MotoGP mixed-conditions specialists that also includes his replacement Miller, Zarco and Marc Marquez.

“I don’t know what it is,” he said. “I think, beginning of last year, we also found quite easily a rain setting that suits my style and takes the best of the bike. And that’s the only explanation, I think.

“I think I only have a bit of advantage when we don’t ride, so we have dry sessions [during the weekend] and then we have one wet session, which is the race. I think these first 10-15 minutes I can be very quickly on a good level.

“In Motegi we had many times on the wet, and I think the level between everyone was more equal, because everyone has more time to find their best setting, they can practice at it.

“That’s the only reason I can find.” 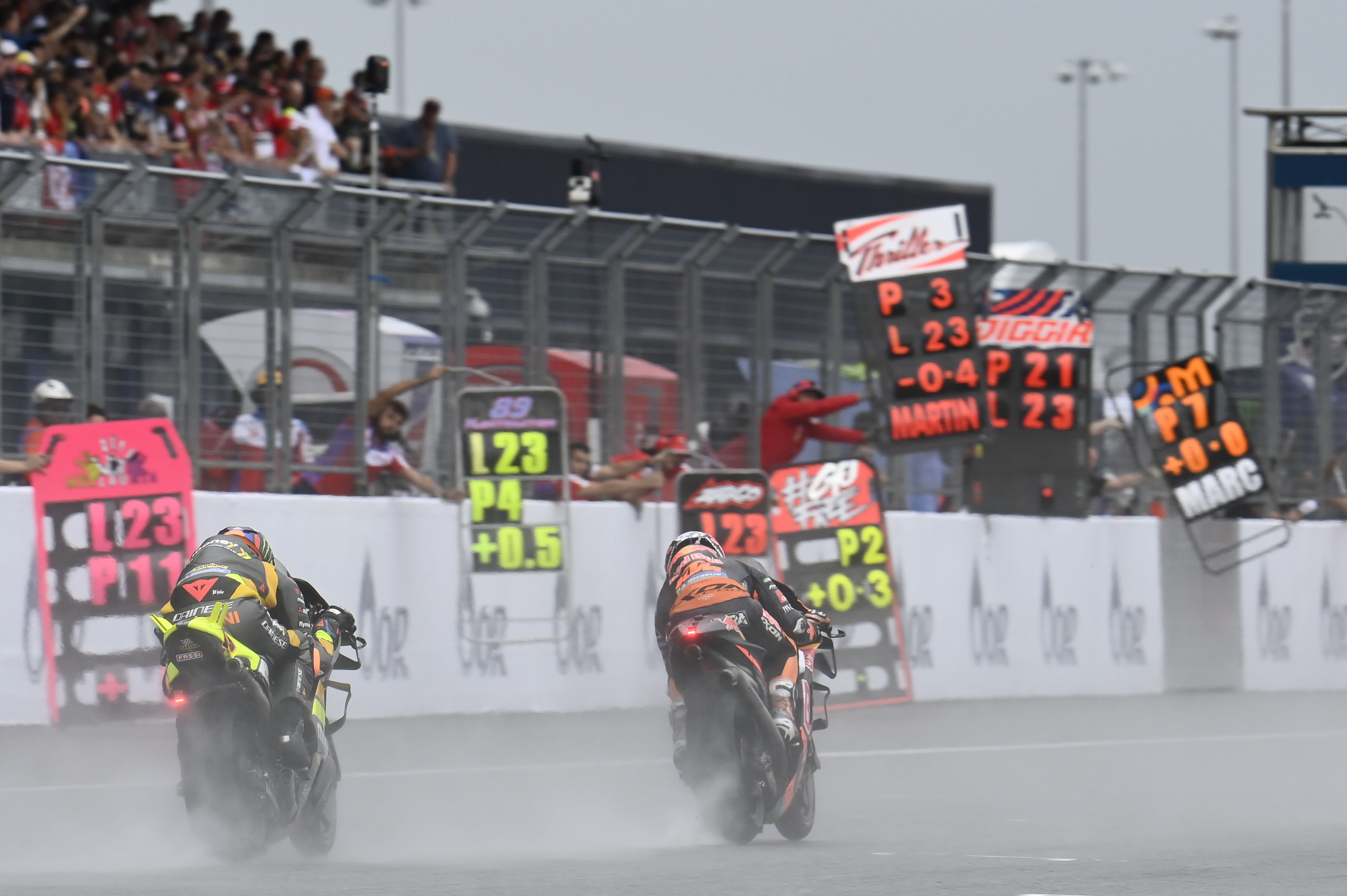 But Oliveira’s not just a rain specialist – his most imperious win is still the incredible Portimao walkover in the dry to close out 2020. And while much of this season in the dry has been unspectacular, there have been clear signs of gradual improvement, both as a whole and relative to team-mate Brad Binder.

There is still no credible argument to be made that Oliveira has outperformed Binder. The South African was prioritised in contract renewal talks and proved that decision correct. But Oliveira is arguably close enough to where there would be no urgency and not much in the way of raised eyebrows if he were kept on in the works team. 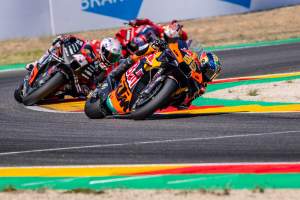 KTM seems to have held a long-term interest in Miller and is presumably convinced the Australian will have a higher ceiling, but the way modern MotoGP is there will be pain before gain.

Miller will have to learn the RC16, a daunting task that arguably more have failed at than succeeded. There’s every chance that over the first half-season of 2023 signing Miller will look like a worse move than the alternative of continuity.

But it’s not an argument that has particularly thrived in hindsight. Oliveira is improving and won impressively at Buriram, but Miller is very obviously in the best form of his MotoGP life. And when you have a lead rider like Binder, you can afford – and probably have to gamble on – a dice roll like that.

If Binder can’t be MotoGP champion with KTM, KTM has probably seen enough to know that Oliveira can’t be either. As ‘clutch’ as Oliveira has been when presented with victory opportunities, it would be strange to extrapolate that to a suggestion that Oliveira will suddenly be regularly better than Binder when the RC16 is a title-calibre bike. 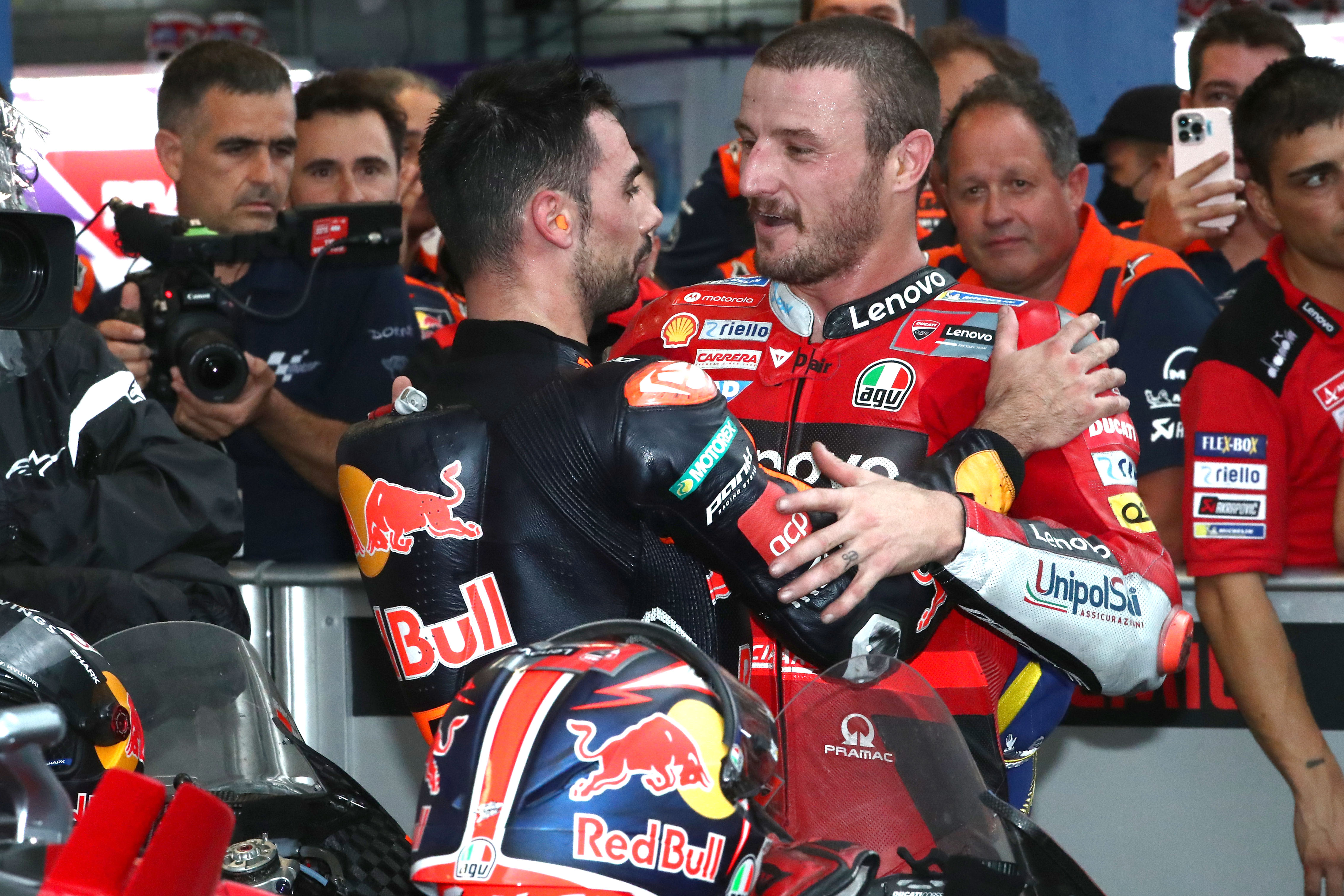 In Miller, KTM not only gets a gamble with a potentially massive upside, but also a rider that, should he prove not quite enough to deliver it a title challenge, may at least help it prove that its bike can be welcoming to newcomers. And that would be very useful for the next cycle of the silly season, in which it could then have a go at, say, reuniting with Marc Marquez.

The logic for Oliveira is likely borne out of the same principle – he’s shooting for the stars. 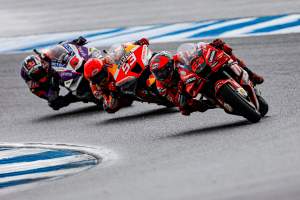 Sure, a big part of the KTM snub is probably the fact that a demotion – as much as KTM has tried to paint it as not being one – is hard to accept and sign up for. Another part is that it’s natural to have doubts that Gas Gas will be an absolute equal for KTM – the marque has always maintained it offers equipment parity, but that’s just not sensible to enforce 100 percent when it comes to the smallest cutting-edge developments.

Yet, equally, there may also be something to the idea that, as much as KTM knows what it has in Oliveira, Oliveira knows what he has in the KTM and what he is on the KTM. With the RC16, he is a rider who can snipe race wins with stunning efficiency, but he is on course to finish eighth in the standings this season as a personal best. Every other rider in premier-class history with five wins or more has at least a top-four in the championship.

What if it’s different with the Aprilia RS-GP, even if it’s a year-old RS-GP that he will ride at RNF next year? Whether it’ll be a better bike than a to-spec RC16 in 2023, who on Earth knows, as it may well change from session to session – but what if Oliveira is more able to consistently extract the best of his performance there? 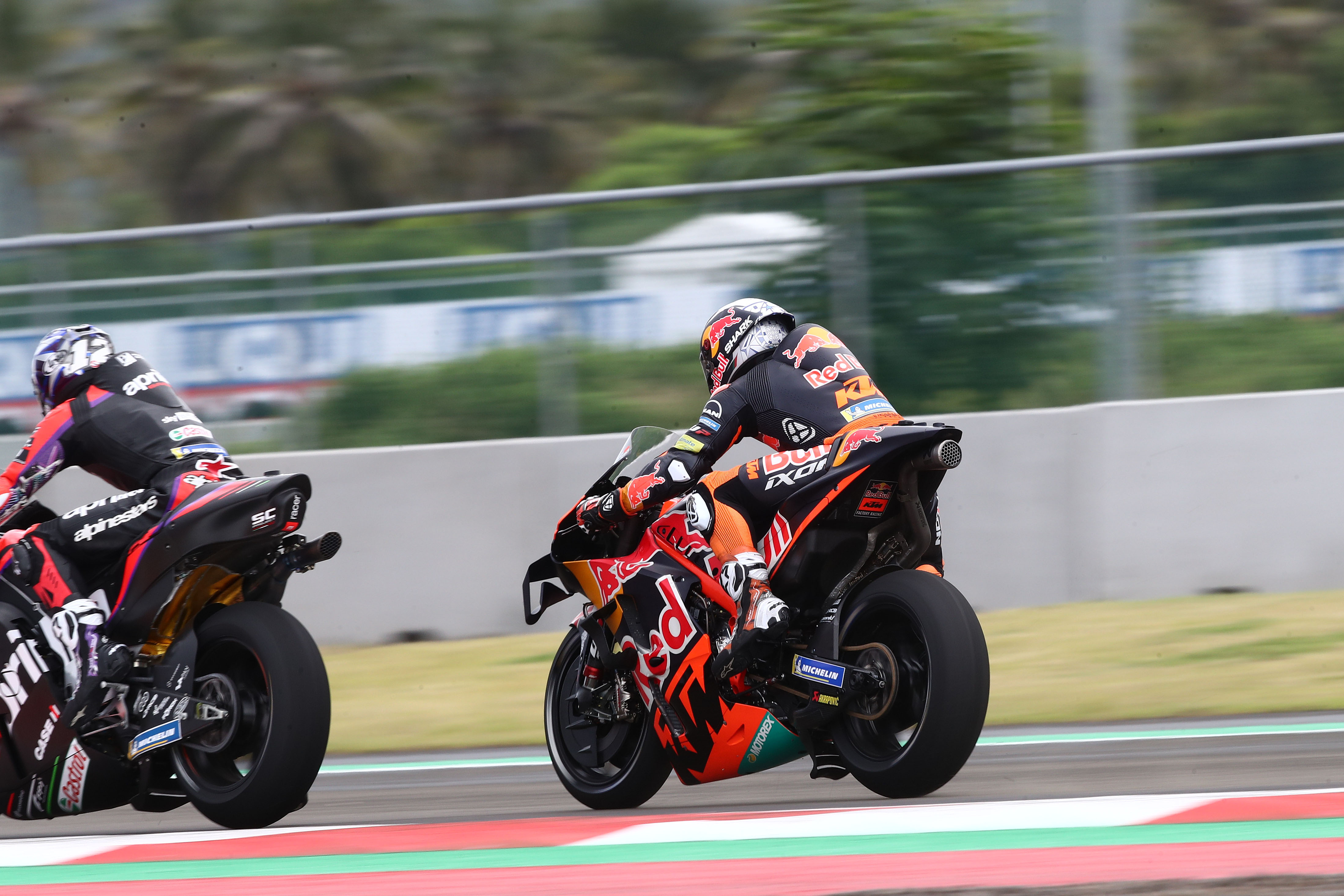 It’s what Oliveira’s sometime CEV 125cc title rival Maverick Vinales wanted for himself, more than anything, when jumping from Yamaha – where he scored eight wins but had massive peaks and troughs that eventually left both sides exasperated – to Aprilia.

And Oliveira has been keeping a keen eye on how Vinales/Aprilia have gone. 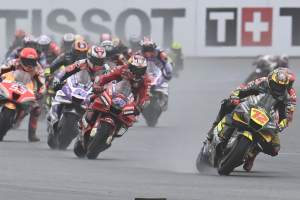 “I think looking at Vinales really helped me to understand more the potential of the bike,” he said at Misano after his RNF announcement.

“Aleix [Espargaro’s success] is normal because he has spent so many years there, he knows the bike perfectly, but Vinales coming from his entire career in MotoGP with inline[-four] engines, that really made it quite interesting when he jumped on the [V4-engined] bike to perform already in a good level.”

Admittedly, at that point, Oliveira also described the RS-GP as “a bike that has already proved that it can be very consistent through every weekend and every racetrack”, which has since been undercut by the obvious struggle of Aprilia’s Buriram performance.

But, as Oliveira also put it, “of course, every move is based in a little bit of faith and hope”.

Could KTM end up ruing that it let him go? For sure. Could leaving KTM end up the worst mistake of Oliveira’s career? For sure. In fact, there are probably good odds on at least one of the two ending up accurate.

But these are two parties that want to be at the very top, and have shown they occasionally reach that top together. It is not unreasonable to see going their separate ways as a potential way of turning that ‘occasionally’ into a ‘reliably’.