Why Quartararo rode with unzipped leathers in Catalan GP

According to The Race’s sources in the MotoGP paddock, Fabio Quartararo’s charge through the pack to a potential race win in today’s Catalan Grand Prix was halted by a zip on his leathers that wasn’t fully closed, allowing his race suit to come undone in the final laps of the race at Montmelo.

Quartararo looked to be sitting comfortably behind race leader Miguel Oliveira and ready to pounce for victory in the final few laps of the race after closing down the KTM rider and briefly leading before settling into second – but he quickly fell back through the pack to fourth as it became apparent that his leathers had come open.

The championship leader has been seen removing his chest protector! 😲#CatalanGP 🏁 pic.twitter.com/rAjA9NLmeO

That happened, it seems, because his suit wasn’t fully closed when the lights went out, allowing wind to get under the neck and slowly work the zipper loose. That in turn allowed his chest protector (held in place only by the closed leathers) to move, forcing the Monster Energy Yamaha rider to unzip the suit fully and throw it clear.

It’s unclear why he wasn’t black-flagged by race direction for the incident, as he rode round for several laps in clear breach of the rules, which state riders must ride with their chest protectors in place and that all safety equipment “must be worn, correctly fastened, at all times during on-track activity”. 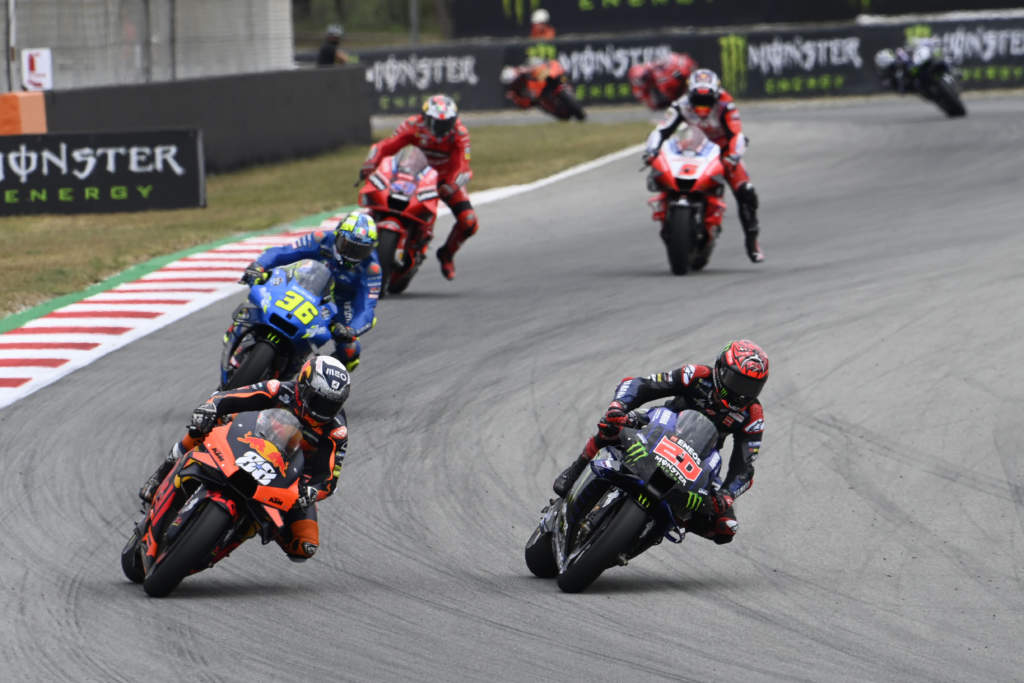 One of the most prominent names questioning the decision not to penalise him for it with a black flag was former world champion Casey Stoner, who took to social media to question the incident.

“Whether or not it was [Quartararo] taking his zipper down on purpose, I believe that should have been a black flag,” said the Australian. “At this level you can’t be allowed to race at 350km[/h]+ with your leathers open.”

Whether or not it was @FabioQ20 taking his zipper down on purpose, I believe that should have been a black flag. At this level you can’t be allowed to race at 350km + with your leathers open.

7 mins ago IndyCar, Junior No Comments