Why Marquez crash left Petrucci fuming at his own team-mate

Jun 21 2021
By Valentin Khorounzhiy
No Comments

Because the various camera angles only captured the KTM and the Honda already intertwined and sliding off into the gravel at Turn 1, the fifth-lap collision was a source of mystery in the immediate aftermath of the race, and both Marquez’s and Petrucci’s comments served to only partly clear it up.

“I was trying to overtake him, I overtook in a clean area, aggressive but clean, but I think he tried to come back to be inside again, but he didn’t expect that I was stopping the bike in a proper way, so I was not really wide, and I feel like he pushed on me on the bike,” Marquez explained. “I was at too much lean angle at that point, and that’s it.”

“Lecuona for me did really some stupid moves” :: Danilo Petrucci

Yet Petrucci’s view of the incident was different, the Italian describing it as follows: “Marquez crashed and I crashed over his bike.”

“But the problem was that he braked hard as Lecuona did,” Petrucci continued. “Lecuona for me did really some stupid moves in the few laps, because everyone was waiting, we were all in a row.

“I did a good start and I was there – for sure I had the possibility to pass the riders in front of me, but if you see all the other riders nobody was passing because still 25 laps to go when we crashed, you just need to wait in this race. And he was pushing hard.”

Lecuona, Petrucci and Marquez were split by two tenths of a second coming across the line to start the fifth lap.

The stewards briefly placed the incident under investigation but elected to take no further action.

“[Entering] Turn 1 we were let’s say in a row, I braked hard, he braked harder and Marquez was behind him, he braked with this reference, and Iker was going wide,” Petrucci added. “Marquez crashed and I found Marquez’s bike under my wheels.”

“Iker still continues to be so aggressive in the first laps and then finishes the race last” :: Danilo Petrucci

The available footage does corroborate Petrucci’s suggestion that Lecuona was running wide, though not hugely so, after taking the inside line into the corner.

“Very, very few words to describe everything because we did a good weekend, we did a good start, we were just waiting – but I’m really disappointed with Iker because he can learn from all the 21 riders around him, not only from me, and he still continues to be so aggressive in the first laps and then finishes the race in last position,” said Petrucci. “His race strategy is this, more or less.”

Lecuona ended up taking 17th place, but attributed this to a suspected case of food poisoning. He didn’t face the written media but said in a Tech3 press release that he “definitely had problems with my stomach and felt bad” and therefore couldn’t keep pace.

Asked by The Race whether he intended to clear the air with Lecuona, Petrucci said: “No, I think the only thing I can do is just to qualify better and stay away from him, and then he will cook with his own water in the next races.”

Lecuona and Petrucci are potentially battling each other to preserve their respective MotoGP futures, as one of the Tech3 KTM seats will be taken up by Moto2 points leader Remy Gardner next year.

The emergence of star Moto2 rookie Raul Fernandez could leave both on the sidelines, but Fernandez appears far from committed to forcing a MotoGP move for 2022 – while having also reportedly fielded interest from other MotoGP manufacturers beyond KTM. 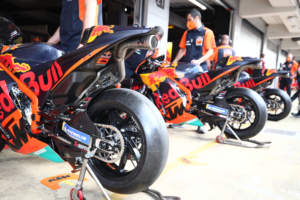 Asked by The Race whether the exit was made more frustrating by the fact he’s potentially running out of races to make his case for 2022, Petrucci said: “It’s just losing the race and ruining all the work of the team. Because, doing like this – if he [Lecuona] could maybe wait a bit, we could finish everyone, me in the top 10, maybe he scored some points.

“Doing it like this, all the Tech3 team goes away with zero points. And nothing to say more.

“I am not a world champion but it’s 10 years that I’m racing in Sachsenring, that I know quite well how things go here. Here it’s just managing the left side of the tyre without attacking, to push in the last 10 laps if you have some tyre left.”