Why Crutchlow’s final Honda season is going so badly

LCR rider Cal Crutchlow has launched a stinging assessment of the state of affairs at Honda after the opening five races of the 2020 MotoGP season.

Languishing in 21st place in the standings with only seven points from the 125 available, with only stand-in riders behind him, he says that this year’s bike is hampering his ability to do anything better.

Crutchlow’s no stranger to a hard-to-ride RC213V but it was assumed he would become Honda’s lead rider in the absence of the injured Marc Marquez and given works man Alex Marquez’s inexperience.

“We can’t pass anyone, we can only get passed” :: Cal Crutchlow

Instead been Crutchlow’s team-mate Taka Nakagami on the 2019-spec machine who’s leading the way for Honda and fighting for podiums.

Unable to find a comfortable base setting with the bike, Crutchlow was a frustrated 17th in last weekend’s Styrian Grand Prix.

He says the Honda is denying him the ability to act decisively in the area where he’s traditionally strongest: braking.

“The race was exactly the same as the previous five days of riding the same here – I gave my best and you can see the result,” said Crutchlow.

“I spent a bit of time riding with Alex, and I can see where his bike is better than ours and I gave that information to Honda.

“But I saw it in practice too, that they were working a little better in a couple of areas.

“The problem is that we can’t pass anyone, we can only get passed.

“Me riding a good bike at 90% of my ability should be top eight. That should be fast enough” :: Cal Crutchlow

“I made a rocket start in the second race and was two whole rows ahead of myself. But then I braked on the kerb at Turn 1, Fabio [Quartararo] braked in front of me and came onto the kerb, and I ended up doing the long lap loop.

“I gained six positions from the start and lost 10 in the first corner. That wasn’t ideal!

“I was able to regain a few places in the braking zones, but then you get stuck in a position. You gain in braking, you lose on corner exit, and you stay where you are.

So where’s the problems coming from? Right now, it seems like the sort of step he made at the opening race of 2019 is so far eluding his crew – and until he finds that level of comfort on the bike it’s going to be hard to up his pace.

“We struggled with the 2019 bike in testing at the start of last year, and then I went to the race and finished on the podium at the first race [pictured above] and had pace for the podium in the second race until I got a ride-through,” Crutchlow recalled.

“We found a good feeling and it stayed most of the year, but this year I don’t feel like we’ve made that progress with this year’s bike.

“I’ve felt a bit like I’m not riding the best I’ve ever ridden, but me riding a good bike at 90% of my ability should be top eight. That should be fast enough.

“But with the package underneath me I can’t do anything more. We try the bike in 15 different ways, and it just does the exact same thing. The feel from the tyres, the braking, the acceleration, the way it slides.

“And that’s always been something a lot of riders have felt with the Honda. Sometimes you can ride around that, but I can’t do that at the minute.

“I’ve always been good at picking the bike up, accelerating, and ours just [wheel]spins.

“Our bike isn’t working with this tyre, but Taka’s bike is.”

While he’s still not fully recovered from the broken left wrist he sustained at the opening round of the championship in Jerez when he crashed in the warm-up, Crutchlow jokingly admitted that really it’s making no difference to his performance.

“If I use it in a certain way then there’s some pain in my hand, but it’s not a way I use my wrist on the bike so I have no problem there.

“I wish I could use it as a massive excuse for what’s going on, but honestly speaking I can’t.” 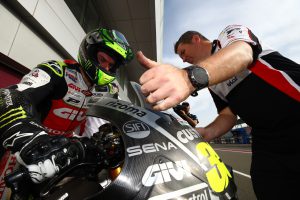 Adding insult to injury for Crutchlow is his awareness that there’s a specific area where LCR is weaker than last year because of a change made by Honda.

It’s the second season in a row that Crutchlow has lost his electronics engineer to the works Honda (firstly to Jorge Lorenzo ahead of 2019 and again this year to Alex Marquez’s team).

Relying on his 2019 data engineer to step up and learn as he goes, Crutchlow admitted that there’s still more development scope in that sector.

“Alex has more grip than me, more traction out of the corner,” he said.

“I don’t know why, but we need to continue to work with the team on it and to get Honda’s help.

“Although Beefy [Christophe Bourguignon] is a great crew chief and has been working with me and Honda for a long time, he’s not an electronics engineer.

“We need to continue to get Honda’s help because he’s done a very good job but he needs to understand it more.”

Complicating his desire for more support from Honda is his imminent departure, though. Leaving the manufacturer at the end of 2020 and set to potentially replace Andrea Iannone at Aprilia, Crutchlow conceded at the weekend that his HRC support isn’t what it once was.

“Hesitantly, they aren’t as close, but that’s the reality,” he said.

“We’ve seen it before with other riders that have left. If I was leading every session they’d be there, but that’s maybe not the best way because maybe we need some help.

“Don’t get me wrong – HRC are helping our guys.

“But on the other hand, I work with my team in a good way because they understand the bike. The information I give to my team still goes to HRC, and I don’t know if the support being the same or less than before makes any difference to how I feel about the bike.”