It’s finally time to get the 2021 MotoGP season underway, with the first of two races in two weekends scheduled for Qatar’s Losail International Circuit on Sunday.

But with the coronavirus pandemic creating one of the most unusual pre-season testing plans in the history of the championship, the title race is more wide open than it’s ever been.

That’s a bold claim to make days before even the start of free practice for the opening round, but next Sunday’s Qatar Grand Prix is maybe the only race of the year where something akin to surefire predictions can be made, thanks in large part to MotoGP testing being limited solely to Losail since last season.

In a normal year, we’d have seen bikes on track in Spain after the final race, with two days of testing at Valencia and another three days at Jerez standard in previous seasons. That would have then been backed up with three more days in Malaysia at the Sepang circuit, before the series finally headed to Qatar for another three days ahead of the opening race.

Instead this year what we’ve seen is a mere five days on track at Losail crammed into only a week.

It puts us in the unusual situation of having a relative mountain of data for the fast desert circuit – and barely anything to go by for the remainder of the year.

So let’s start at the beginning: what’s going to happen when the start lights go out on Sunday night?

On paper, it looks like the race is set to be a four-horse fight of three Yamahas versus a wildcard, if the average lap times from testing are any measure.

The factory Yamahas of Fabio Quartararo and Maverick Vinales have been consistently the fastest on race pace across the test, almost perfectly matched to each other and fractionally clear of the rest of the field.

They’re closely shadowed by satellite Yamaha rider Franco Morbidelli of Petronas SRT and by Aprilia rider Aleix Espargaro, who arguably stands the best chance ever of securing Aprilia’s first podium at one of the two Losail races thanks to an incredibly strong testing programme there.

The second group of riders on average times is perhaps a quarter of a second back on the leading quartet, and has more of a mix of manufacturers in it. 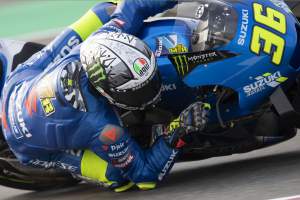 We know that the Yamaha M1s are the slowest bikes in a straight line on the grid, with even the Aprilia leapfrogging them in the top speed charts this year. And we know that as a result the Yamahas are unable to attack out of corners to set up slipstream overtakes, instead relying entirely on what they can do on the brakes.

That’s not a particularly effective race-winning strategy, and there’s no surprise that nearly every single Yamaha win of 2020 came from a breakaway at the start of the race and the ability to set fast lap times on clear track. 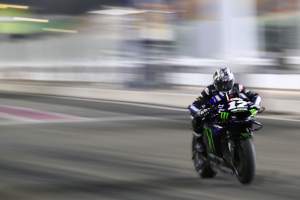 If they can qualify well and get away cleanly from the opening laps, then a race win for any of the four Yamaha riders – yes, let’s count Valentino Rossi in too as he’ll surely be faster on a race day than a test day – is on the cards.

But if Ducati in particular can upset the applecart on Saturday with a front row qualifying position or if one of its riders can use their phenomenal launch control to lead from the lights, then Yamaha is in trouble.

It’s probably not an eventuality that’s going to play out just once, either, with 2020 showing us that back-to-back races traditionally cause similar results from week to week.

Last year, we did see a few surprise packages benefitting from the extra data and going significantly faster the second time round, but with so much testing already conducted at Losail, that advantage for the likes of Aragon race two polesitter Taka Nakagami is likely to be somewhat negated.

However, while we’re more prepared than ever for the opening two rounds of the year, there’s absolutely no predicting what’ll happen when we move beyond Qatar and return to Europe.

It’s easy to say that the likely results will be similar to last year’s given the development freeze under which the engines remain largely the same – but that doesn’t take into account 2020’s upside down calendar and the regular havoc it caused.

We won’t be getting 50ºC track temperature at Jerez as it moves back to its traditional May date instead of late July. Le Mans a few weeks later in May is likely to be somewhat more pleasant than last year’s wet October race, and Aragon won’t feature the same high winds and chilly temperatures with the race moved forward a month to September.

Yamaha was one of many teams destabilised by the unusual temperatures of 2020, which means last year is a very unreliable form guide for a normal calendar even with a partial development freeze.

On top of that, there has still been plenty of development work as factories experiment with aerodynamics and bring new frames to testing. There’s also been a significant reshuffling of the grid, as riders move between teams and onto new motorbikes.

And then of course there is the joker card that will at some point be played: the return of Marc Marquez.

Making fast progress on the road to full recovery from the injuries he sustained last July, he will at some point burst back onto the scene.

While we don’t know what level he’ll return at after missing an entire season of racing and spending almost two thirds of a calendar year off two wheels, he’s nonetheless going to soon be back – and that’s a worrying thought for many of his rivals…