What we learned from Ducati’s exposed MotoGP engine

Last weekend at the Austrian Grand Prix, we saw an amazing sight when the side fairing and belly pan of Enea Bastianini’s Avintia Ducati was ejected from the bike at high speed, seemingly a victim of unsecured fasteners that allowed the 200mph wind speeds generated by a modern MotoGP machine to rip it clean off on the fast run through turn two at the Red Bull Ring.

And while Bastianini was sensible and immediately retired to the pits before race control even had the time to consider black-flagging the reigning Moto2 world champion, he did complete the lap back to the pits – giving us an incredible opportunity to spy the inner workings of a 2020 Ducati Desmosedici bike.

It showed off a whole new dimension of MotoGP – one that is normally a closely guarded secret by manufacturers – as well as our best-ever look at the workings of Ducati’s revolutionary ride height device.

And with that in mind, The Race enlisted the help of a top engineer from a  factory MotoGP team to explain exactly what they were looking out for – and what Ducati’s rivals would be concentrating on when they set out to analyse their own pictures and images from below the skin of Bastianini’s bike.

I was actually surprised when I got our first up-close look at Ducati’s ride height adjuster – it isn’t as good as I thought it was going to be! I think that some of the others, from what I’ve seen of them, are probably better – the KTM one looks like the best one so far.

There’s not really anything that stands out, because the principal with everyone is exactly the same in how it works, because of how the rules are. There’s only one way you can do it. The thing I think people will be looking at is how it has structured its mechanism, is it smaller or is it lighter?

They’ll be looking at the rod, because you might be able to work out how low it goes from the actual lever itself, and how it all works with the linkage. You might even be able to see the cables going to the front lever in some photos, how it’s all connected together. You can tell how the link, the shock and the device all work together. It’ll be the intricate details like that. 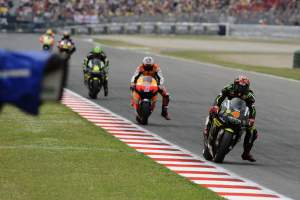 Your bike weight is at the 157kg minimum limit, and you’re suddenly sticking on a big bulk of mass – and you want it to be as light as possible so that it doesn’t have an effect on braking, cornering, acceleration. You have to fit something as light as possible and that’s where the others might be more interested.

How it has been designed to adjust the ride height is pretty simple – it has added an extra element to the linkage, which you have to. How you adjust your rear ride height is all dependent on your link, so you have to have some kind of adjustable lever connected to it and the shock.

It’s how you implement it that changes, and that’s what the other manufacturers will be looking at. We’ve got our way, but it’s good to see how the others do it.

The piston is attached to the swingarm, but that’s just where Ducati has decided to fix it – and that’s the sort of thing that the others will be interested in. If you look at some of the others it’s got nothing to do with the swingarm. Where it’s attached will matter, because you don’t want it to affect braking. You’re adding mass that’s going to be pitched up, and what they’ve done is quite interesting. 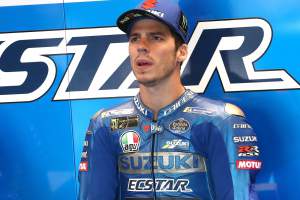 There are things you’ll never know and won’t learn from a photo, like say what pressure is inside the pressurised part of the system. We’re more looking to see where it’s placed on the bike, what it’s attached to, how it works with the link and the shock.

And to be honest, we’ve already got photos from other bikes anyway. People sometimes make mistakes when they warm up their bikes! I can imagine that most people will have someone dedicated to the rules and to stuff like this.

The last morning we put something new on our bike, we had engineers from another team around as we were warming up the bike with cameras and that. Everyone is on it.

But this is the first time we’ve seen the Ducati one up close. Someone got a massive telling off for what happened to Bastianini’s bike – I reckon if it was a Japanese manufacturer, someone would be looking for a job this week. It would go mental about it!

In terms of what else we learned from the photo, there’s a lot of things we’ve been paying more attention to than the ride height device! We’re looking at the engine flywheel, where things are attached and working out the sizes of things. 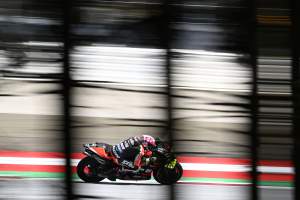 MotoGP engine upgrade could be game-changing for Aprilia
Read more

When people are allowed to take pictures of the bikes, the photo is never quite side-on. The reason for that is because when it’s at an angle it’s harder to measure stuff – but some of these shots are properly side on. You can work out some dimensions from that.

It’s quite a narrow, aerodynamic bike – but it’s not just designed with aerodynamics in mind from the outside but from the inside as well. One of the things you can see is how tight and intricate it all is, where everything is placed.

Let’s say that that is something we’ll be having an eye on!