What we learned from a MotoGP duel with big implications

Sunday’s Aragon Grand Prix produced something almost unique in the world of MotoGP.

A rider yet to even win in the premier class took on the king of the duel Marc Marquez for the first time – and incredibly, the upstart came out on top, as Pecco Bagnaia maintained his cool and Marquez was unable to do a thing about it in second place.

It certainly wasn’t an easy win for the Ducati rider, with a series of moves in the frenetic last few laps giving him plenty of work to do to defend the position that he had held all race.

A battle for the ages between Pecco Bagnaia and Marc Márquez!

Enjoy the last three laps in full, because this sport is the best 🙌

And the scrap offered plenty of information for us to dissect afterwards.

We’ve analysed some of the key takeaways from the epic battle between the two riders, and how it might influence not just the rest of the season but even going beyond 2021 into the future.

Bagnaia is very good under pressure

This is perhaps the most obvious thing to note from the race, given just how well the young Italian handled the pressure of a sustained Marquez onslaught for the best part of nearly four laps.

Enduring a double-digit number of overtaking attempts from Marquez, Bagnaia simply held his line knowing that he was going to be able to come out on top given the Honda rider’s inability to hold his lines on used tyres.

In fact, not only did Bagnaia maintain his cool, he actually seemed to calm down as the pair got locked into battle, if MotoGP’s on-screen heart rate monitor is anything to go by. 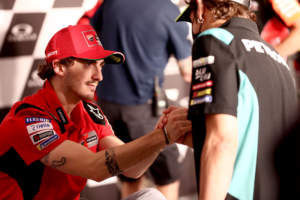 But he insisted after the race that that’s because he knew that he was the man in the stronger position.

“I think that I was in the best position,” Bagnaia said.

“When you’re in a situation like this, in the last part of the race, when the grip isn’t so high, it is easier to defend.

“Every time you try to overtake it’s easy to go wide.

“I was thinking that he would try and overtake in the last part of the race, and I saw when he started to overtake that my braking was strong. To overtake there was hard.

“Every time he tried he went wide because the rear tyre wasn’t helping him to stop, and I was in the best position.”

This is something that we’ve never really seen from Bagnaia before in MotoGP, at least not at the front of the race.

He has occasionally been prone to errors when leading but not under attacking pressure before.

If he can keep showing this level of cool going forward, it’s bad news for everyone else.

Marquez is still not fully healed

It’s not a surprise to get more evidence that Marc Marquez isn’t back to full fitness yet, given just how many errors and mistakes he’s made throughout the year – and the fact that Bagnaia beat him in a straight out fight at one of the Spaniard’s previously dominant venues says a lot about how his recovery is going.

Downplaying the state of his injury after the race even as the results reflected his level, Marquez did concede one important thing: while it might not be making him slower, it’s certainly making him less precise.

“The shoulder condition was acceptable,” he said, “but Pecco was better than us.

“It’s not a real problem, but it’s something that is there and something I am trying to manage in a good way.

“My riding style before was always playing a lot with the front tyre and pushing the limit, having some close calls and saving them with my elbow. 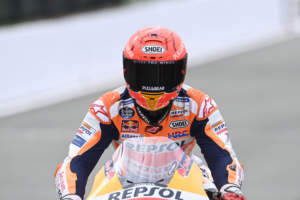 “Now, I can’t do that. As soon as I have one, I crash – that’s one of the reasons why I’ve had so many crashes this year.

“In the past, I saved many crashes, but this year when I lose the front I give up.

“In the fight with Pecco, in some of the braking points I went wide because I didn’t feel under control so I let the brakes go and ran on. It’s something that I need to keep working on in the future.

“I know that when I feel better again in the future I’ll ride in a better way.”

It’s taking him a long time to recover, though, and it’s looking increasingly unlikely that we’re going to see a Marc Marquez that comes close to the dominant 2019 champion before this year is out.

Ducati might have found a talent that fits its bike

Since as far back as the days of Casey Stoner, there has been a persistent problem with the Ducati – its ability to turn in the middle of the corner.

Stable on the brakes, fantastic on acceleration and the top speed king of MotoGP, the issue it’s always struggled with was longer corners and carrying the speed.

It was a particular concern of Andrea Dovizioso’s, who complained time and time again about the issue – yet since his departure from the factory team (and his replacement with a younger Italian who only knows Ducati MotoGP machinery and not any of its rivals’), those complaints have stopped. 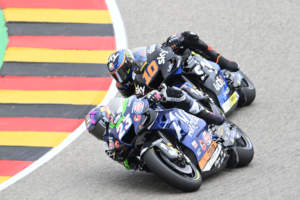 Bagnaia instead seems to be able to get the absolute best out of the Desmosedici – and it’s something that not just the rider but his rivals have noted too, with a rather telling comment from Marquez after the race hinting at how much of a fly in the ointment Bagnaia could become for him.

“I tried from the beginning to follow Pecco, but I knew he was riding so good,” conceded Marquez.

“He was braking late, stopping the bike, and especially on the acceleration he was really fast.

“He is the same as Dovizioso, except with more corner speed.”

There are three counterclockwise tracks on the calendar that Marquez targeted for victory in 2021.

He’s tasted the Prosecco at the Sachsenring, he came awfully close at Aragon – and his final chance awaits at the Circuit of the Americas in Austin next month.

However, while he might have the chance to win there again (and that would be a seventh Marquez win in Austin’s eight appearances on the MotoGP calendar if it happened), it isn’t enough for him – with his ambitions very much centred now not on a return to the top step of the podium but on a 2022 return to the top of the championship standings.

“First of all we have Misano, and I’m still trying to concentrate day by day, race by race,” the Repsol Honda rider explained.

“It’s true that during this weekend I had one of the worst feelings physically but one of the best feelings with the bike, so we’ll see what we can manage in Misano.