With the bombshell news that Suzuki will leave the MotoGP paddock at the end of the 2022 season expected to arrive imminently, it has exploded the rider market for next season.

The move takes two extremely competitive machines off the table and it puts both 2020 champion Joan Mir and 2022 front runner Alex Rins into the open market just as things looked to be settling down somewhat. It’s a decision that will have repercussions not only for them but for many others too.

As recently as last week, newly-appointed Suzuki team boss Livio Suppo told The Race that his plans for the future were to retain the services of both of his current riders – a decision that has been taken out of his hands by the company’s Japanese management and its decision to walk away from the series only two years after winning a title with Mir.

With the strength of his title success in 2022, Mir’s future is perhaps the easiest to speculate on at this point. It’s not a secret that he and Fabio Quartararo were among Honda’s targets for potentially replacing Pol Espargaro should he continue to struggle – and with both that happening and with Mir now a free agent, it doesn’t take a lot to work out that there will be some serious conversations underway between his manager Paco Sanchez and Honda boss Alberto Puig tonight. 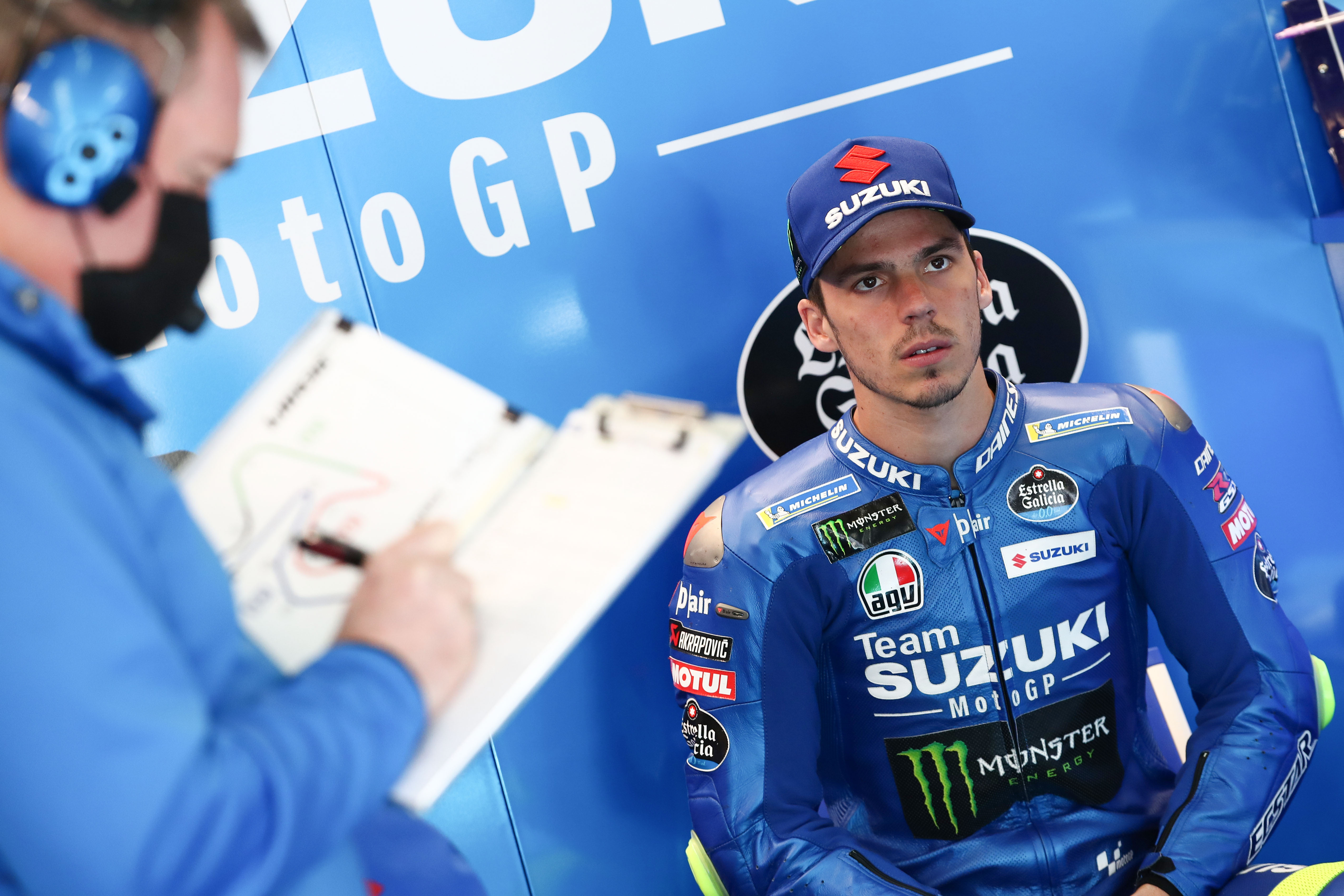 Should that not pan out, you would imagine that his first preference would be to jump on board a Ducati, another machine that seems most likely to suit his hard-braking style. In theory, Ducati has a full house with Jorge Martin previously expected to take over from Jack Miller alongside the already-signed Pecco Bagnaia.

But with Martin currently suffering a terrible run of form, crashing out of four of the opening six races of 2022, and with Mir at a loose end (and therefore perhaps open to a considerably lower financial offer) then it wouldn’t be a complete surprise if Ducati was to make a surprise bid for the former champion. 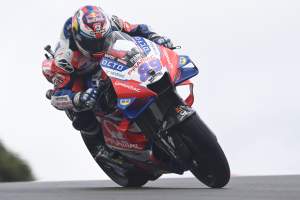 There’s maybe also an option for him at KTM, where Brad Binder is already signed up until the end of 2024 but where Miguel Oliveira (ironically recently rumoured to be in talks with Suzuki himself) doesn’t yet have a deal sorted – something he’s probably in a rush to address right now.

On the other side of the garage, Rins is likely to be looking for something that’s closer in style to the inline-four engine that currently looks to best suit his smoother, more old-fashioned riding style. That means Yamaha, where in theory there are two open seats at satellite squad WithU.

One of those, currently occupied by Andrea Dovizioso, is on 2022-spec factory machinery and (backed directly by Yamaha) believed to be quite competitively paid, at least in relation to Rins’ Suzuki salary. The Italian has struggled this year on it, but that’s in part due to taking a year out of the sport and trying to readapt from eight years on Ducati’s V4 engine, and the transition for Rins would likely be easier. 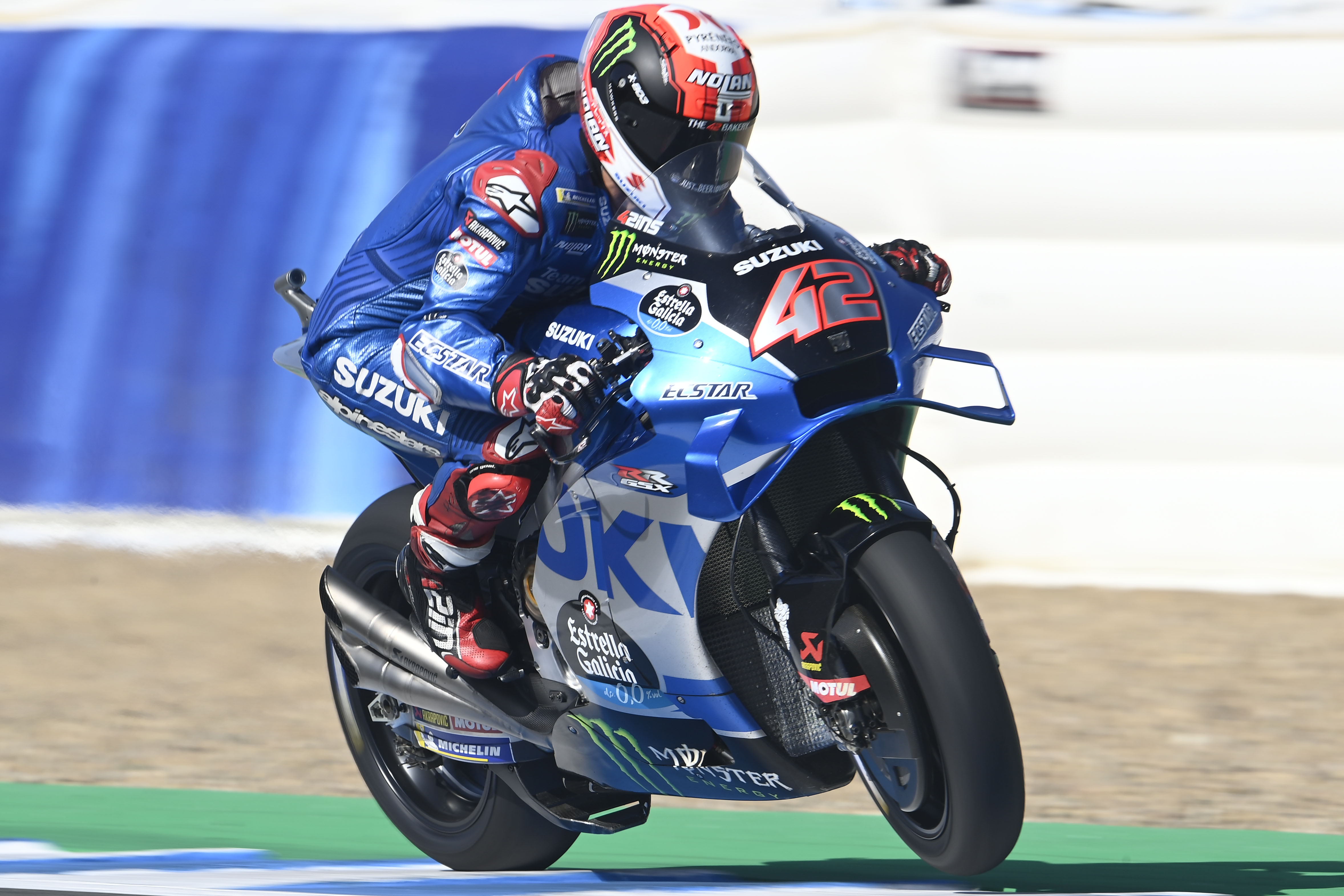 There’s maybe also an option at full factory status too, however, as Franco Morbidelli continues to underperform alongside Fabio Quartararo.

Signed up with the Japanese factory until the end of 2023, there may nonetheless be an option in his contract that would allow him to return to the satellite team – on paper a demotion, but in reality a chance to once again work with veteran crew chief Ramon Forcada, who took him to second place to Mir in the 2020 riders’ championship. 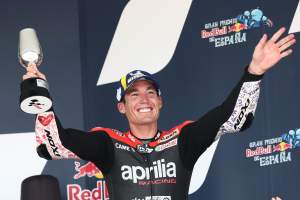 Should Rins not find a room at Yamaha, another option for him (or potentially even for Mir) could also be Aprilia. Maverick Vinales really couldn’t have picked a worse time to speculate that he wants to move elsewhere, as he did only a few days ago – but now that the idea is out there, it means you can’t blame the Italian marque for reaching out at least tentatively to Rins and Mir.

The only thing that might throw a spanner into the works is two unknown factors that have to be accounted for. Firstly, reigning world champion Fabio Quartararo still hasn’t signed an extension with his current Monster Energy Yamaha team. Believed by the team to be a likely factor given team boss Lin Jarvis’ quotes at this weekend’s Spanish Grand Prix, it was previously expected to be the linchpin move of the whole season.

And while time is of the urgency even more today than it was yesterday, it may be that key decisions will still wait on the Frenchman’s choice. That’s going to leave a lot of people facing a rather stressful situation, however, because of the other factor: the fact that we don’t yet know the composition of the full grid next year. 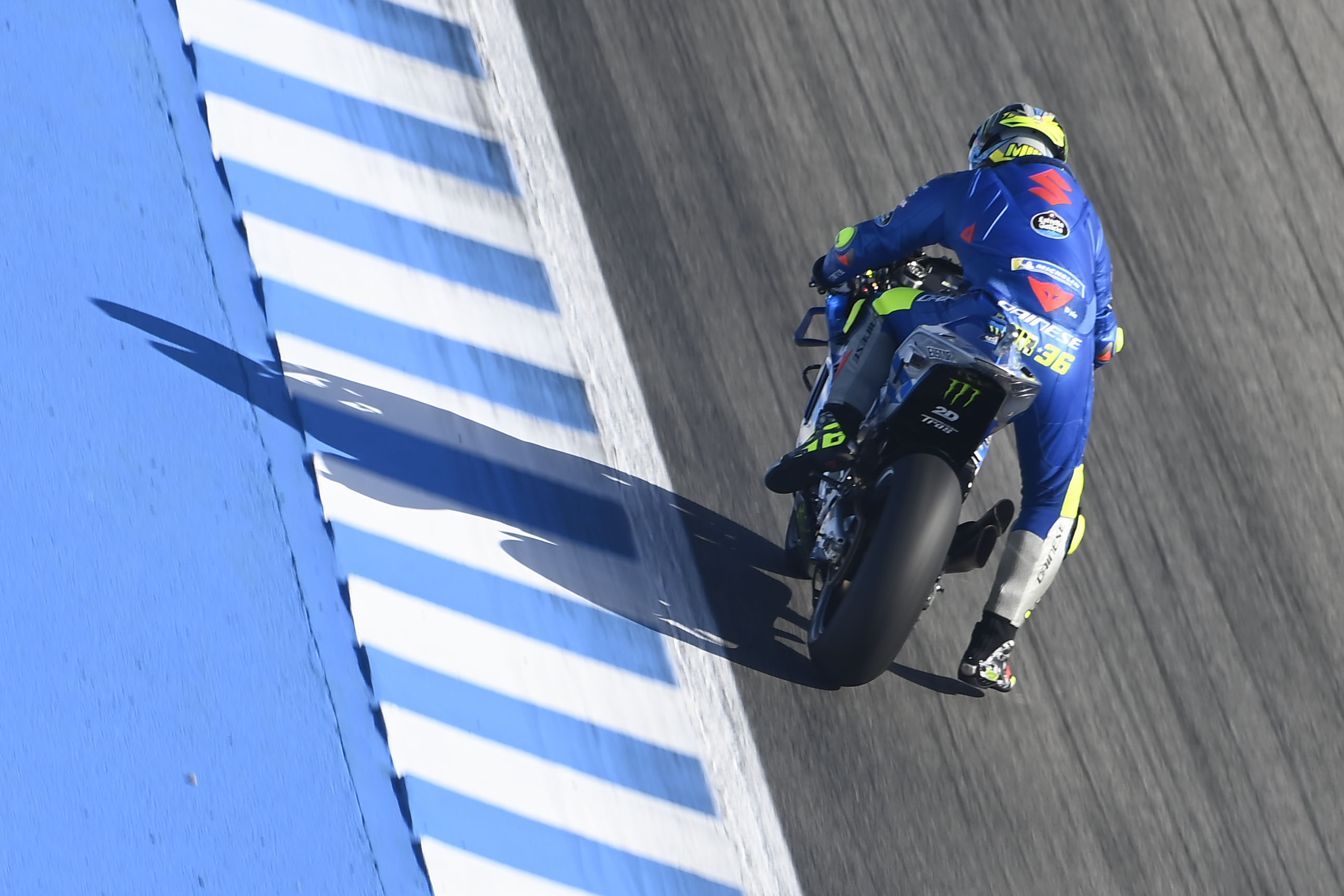 Will the departing Suzuki be replaced by a satellite team? That’s certainly one option, but it’s one that is going to require frantic negotiation from not just teams and other factories but also by series promoters Dorna, who is going to be busy addressing a wholly unexpected problem that will have arrived like a tsunami.

However, with Suzuki’s riders both among the highest-rated on the grid and enjoying a strong start to 2022, the most nervous people right now won’t be them: it’ll be the rivals who could well be displaced by the chain reaction caused by today’s leaked news. 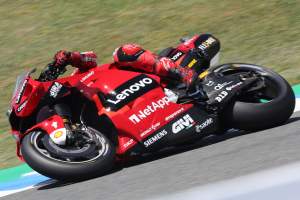 One such rider is probably current Repsol Honda racer Pol Espargaro, who until recently has probably been able to breathe a little freely as Mir looked increasingly like to stay at Suzuki. Should he be displaced, it’s not sure where would be available for him.

One chance might be for the 2022 podium finisher to step down to the LCR Honda team – which would then in turn displace both current rider Alex Marquez and Lenovo Ducati refugee Jack Miller, who is in talks with his old team.

Similarly, should one of the Suzuki duo end up at Aprilia, it’s not sure what options would be open to Maverick Vinales, who is having a slow adaptation to the RS-GP and who burned many bridges last year thanks to his rather high-profile departure from the factory Yamaha team.

You would imagine that Oliveira, a 2022 race winner already in Indonesia, would find it easier to find a satellite ride should he be pushed out of KTM, but even that might not be a sure thing as the reshuffling continues. 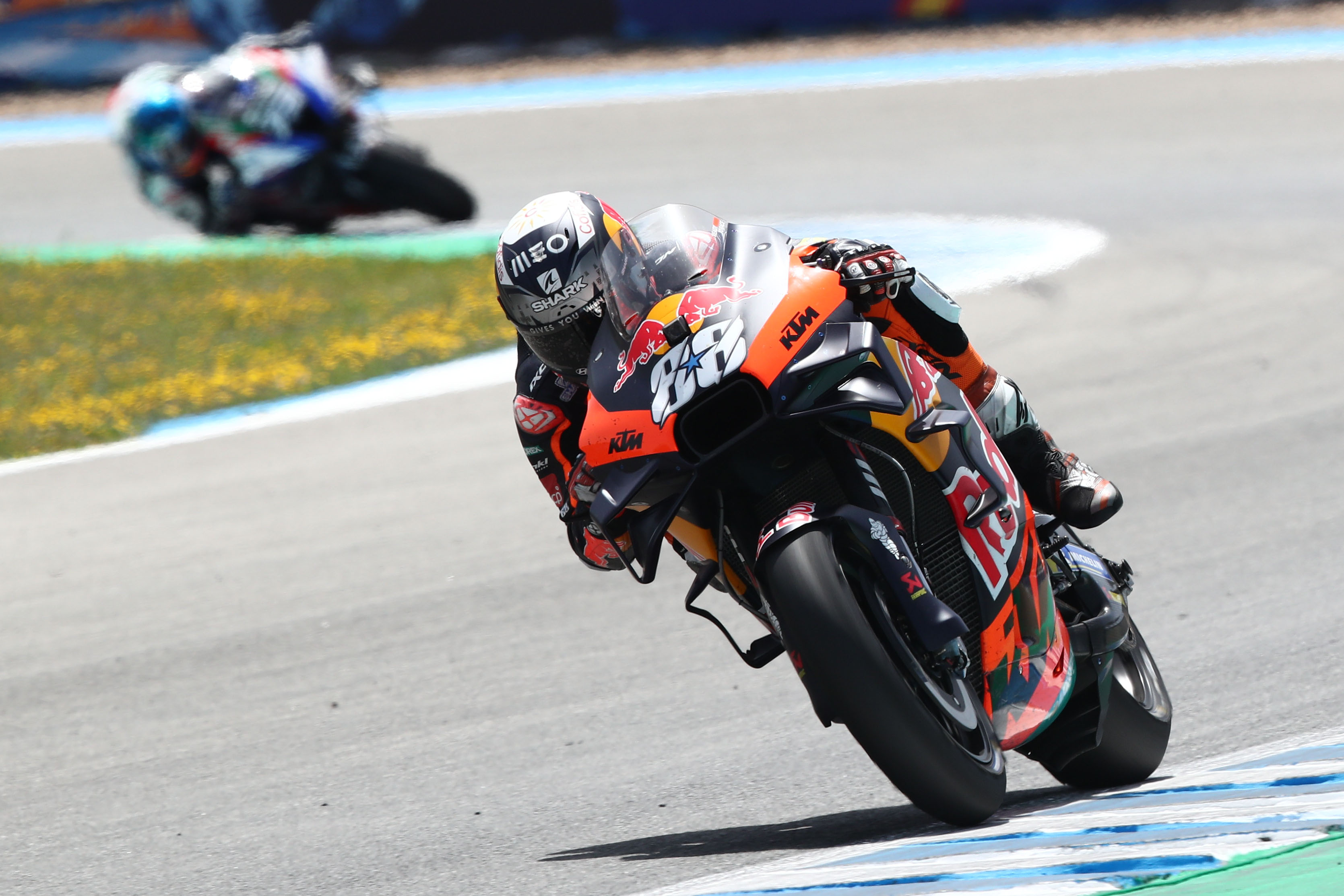 There’ll also be repercussions further down the Grand Prix pecking order with two fewer places on next year’s grid as things stand right now. That’s potentially two fewer chances for a Moto2 rider to be given a chance, as the riders already in the premier class are circulated around in what is likely to now be a somewhat more conservative rider market.

Of course, with Dorna pushing to try and line up a replacement for Suzuki ASAP, it also might not be the smartest move to rush into signing a new deal just now in case something does appear further down the line – just like how Alex Marquez arrived at Repsol Honda in 2020 to replace Jorge Lorenzo following his shock retirement.

Waiting on a deal with a team that’s not yet in existence, though, is a long-shot option. It’s one that paid off for Dovizioso in 2022 – but it’s more likely going to be the last-minute backup plan for an exile from the current grid before they jump ship to World Superbikes at this point.