What Marquez’s win means for Honda and MotoGP

The fact that a Marc Marquez victory at the Sachsenring feels so significant, and perhaps even like an underdog triumph, is a real indicator of how much that Jerez crash and ill-fated return really changed MotoGP.

But though it’s a supremely pleasing milestone on Marquez’s road to recovery, and it was heart-warming to watch him let the tears flood on the podium as something of an acknowledgment of what he’s been through, the wider significance of Marquez’s triumph has more to do with its impact on the current title race than his own competitiveness. 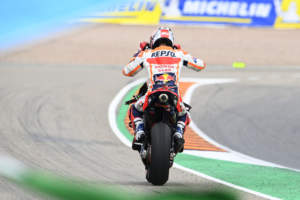 Again, mentally this will be a big boost to Marquez, his crew and Honda. “It’s one of the most important and hardest moments of my career,” he said after the race.

“[The final stretch] was hard, was really hard to stay concentrated because all the memories, all the situations during this last year were there on the mind. But yeah, we did it, we will do it again. We’re in a hard situation but we will try to keep the same level.”

They will do it again, no question about it. But this wasn’t the big test of the post-injury Marquez and the RC213V package he has.

Forget for a second this was the Sachsenring – although do obviously keep in mind that this is a track where Marquez has never lost in grand prix racing since 2010. Everyone obviously earmarked this venue as the one that will bring the comeback win, and everyone was right.

But the more significant aspect is how the victory was achieved.

“We know Marc on this track is nearly unbeatable,” said KTM’s Mike Leitner, whose in-form rider Miguel Oliveira kept Marquez sweating for much of the race.

“But it was one lap, the lap that this rain comes, and this made the gap, and then was very difficult to close it. I think he had to use the tyre harder and nothing was left.”

The lap in question was the ninth, although Marquez then eked out his advantage for a couple of more laps afterwards while Oliveira desperately searched for a way past Jack Miller.

Marquez had Aleix Espargaro on him for the whole opening stretch, but once the spots of rain emerged and the pitlane was subsequently opened for a switch to a wet-tyred bike (nobody took the opportunity, and rightly so) Espargaro’s pace dropped off big-time.

He was passed by Miller – who post-race admitted to being unhappy with Espargaro’s reluctance to push in the mixed conditions. But once ahead, Miller too couldn’t seem to run Marquez’s pace at that point, and suddenly the Honda man was in possession of a two-second gap. 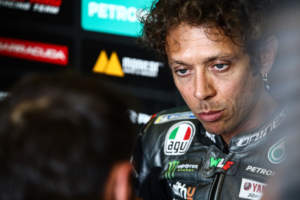 “Today, I knew it was a great opportunity, because I’m coming from a hard situation, three zeroes in a row, but I say today is the day,” Marquez recalled. “Before this weekend, I said, okay, I will try to fight for the podium, I will try to be close to the top guys, but the victory was low possibility, but I said ‘if it’s the perfect conditions, I will try’.

“But when I saw a few drops on the lap four-five, I said ‘it’s my race’. And then in that point I pushed, and I kept the same race pace as before. Even when the second [round of rain] drops started, I pushed even more.”

The thing about post-injury Marquez is, we’ve already seen that that low-grip prowess hasn’t gone anywhere. At Le Mans, when the grip levels tumbled and then the rain properly arrived, Marquez was completely unmatched, and though he’d highsided from the lead it was at the very least, proof that the pace was still there to be extracted.

The bigger question was longevity. Marquez completed more laps than anyone in the test after the Catalan GP, but that’s obviously a different thing to race conditions. At the same time, there are a fair bit more right-handers at Barcelona than at the Sachsenring, which will have been a lot kinder to his formerly broken right humerus and his formerly dislocated right shoulder that has been acting up during this recovery period.

He didn’t have the energy for a late-Friday time attack. He was not on pole, for the first time in the premier class. He possibly wouldn’t have won – definitely not by over a second – if not for that brief rain intermission.

And Assen will probably be a different story. We’re not quite in 2019 territory yet.

But maybe that’s for the best, too. It is impossible not to suspect that Marquez’s incredible 2019 meant Honda was less motivated to deal with the problems that plagued its other riders to an extent where the Spaniard basically won the constructors’ title single-handedly.

The big test will come after the summer break, once Marquez has both rested and had a chance to accelerate road bike training. But given where the other riders ended up – 10th, 13th and the gravel respectively – Honda isn’t out of the woods yet, and the real work is still very much ahead.

But don’t get me wrong – that is no reason not to celebrate. And whatever comes from here Marquez should cherish his 57th MotoGP triumph for years to come.