It’s been quite an exceptional start to the 2021 MotoGP season for Pramac Racing’s Johann Zarco, with the Frenchman’s podium consistency meaning that he’s spent much of the year so far sitting second in the MotoGP world championship. But as that form starts to slip, it’s more a case of reality being revealed and the perhaps unrealistic expectations starting to fade.

Four runner-up finishes in the opening seven races of the year made it quite the points haul for Zarco as his promotion to Pramac from third-tier team Avintia got underway. Not just fast but consistent, with only one DNF at the third race of the year in Portugal, he went into the summer break second only to fellow Frenchman Fabio Quartararo.

Since then, though, things have started to slide. He now hasn’t been on the podium since the Catalan Grand Prix back in May, with a best of fourth since then at the Dutch TT.

He had a complete nightmare at the Red Bull Ring, coming away from two races at Ducati’s favoured track with a sixth and a crash to show for his two weekends – and a win for rookie team-mate Jorge Martin rubbing salt in the wounds.

That means he’s now slid down to fourth in the championship, only two points off Joan Mir and Pecco Bagnaia (tied for second) but nonetheless with momentum against him, as the reigning champion and Zarco’s factory counterpart came out of the gates strongly after the five-week summer break.

And while a title challenge might still be possible should Zarco produce a late-season rally, it’s looking like Quartararo’s runaway 49-point lead over him means that any chance of becoming the first-ever satellite team rider to lift the MotoGP trophy are all but gone.

Yet here’s the thing: that’s not a bad thing for Zarco, because the only reason we’re even talking about him in such terms is because of rather high expectations foisted upon the 30-year-old since his strong start to the season.

Before the championship even began, we knew clearly what Zarco’s actual target was in 2021: to win races for the Pramac Racing squad after it’d spent two decades in the premier class without a trip to the top step. Simply put, it’s hard for an independent team, with its more limited resources, to ever fight for the crown. We knew that coming into the year, and although Zarco’s consistency might have masked it, it remains the fact.

Instead, the goal was always supposed to be about making frequent trips to the podium and to break through into the territory of race winner. It’s unfortunate for Zarco that that honour was snatched from him by Martin at the Styrian Grand Prix, but there’s still plenty of time for him to fulfil his potential for the year.

Tracks like Aragon, Portimao and Valencia all offer a chance for him to strike and to do what the other side of the garage has already done – and if he manages to do it, then there’ll be enough for him to be happy about his 2021 season. 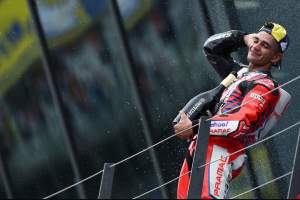 And while he might have been somewhat undermined by Martin’s success on the other side of the garage, it’s unlikely to have a long-term impact on Zarco’s place within the Ducati hierarchy.

While Zarco – who threw his hat into the ring as Andrea Dovizioso’s potential replacement last year but ultimately stayed at Pramac –  is already secure for 2022 alongside Martin at the satellite team, it seems likely that space will be made in the factory team for Martin in 2023 – most likely, right now, at the expense of the somewhat underperforming Jack Miller.

But with Ducati more than happy with Zarco’s performance and his position within the team, there’s no danger of him getting the chop right now. He’s not just securing valuable championship points but also good work for the manufacturer in terms of development.

The old man in a team full of youngsters – Zarco is four years older than Miller and seven older than his team-mate – he’s there to be something of a level-headed test rider as well as a racer, and Ducati has shown in the past that it rewards people in those roles.

Zarco’s path back to a factory-spec bike, after the ignominious end to his time at KTM, hasn’t necessarily been easy – but he’s put his faith in the brand, been rewarded him in kind, and the bottom line is that with or without a championship challenge there’s plenty for him to be proud of so far this year.