An exceptional press conference has been scheduled for this afternoon at the Styrian Grand Prix.

The Petronas Yamaha rider has already said that a decision on his future would be made during MotoGP’s summer break, which ends today at the Red Bull Ring, and the unusual step of announcing an exceptional press conference means that it seems that decision has been made. 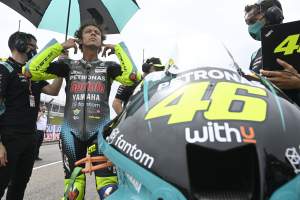 While there has been speculation in recent weeks that he will join his own VR46 Ducati team for 2022 instead of stepping down after 26 seasons of grand prix racing, The Race’s sources in the MotoGP paddock believe that the news will instead be a retirement announcement.

That fits with this morning’s late announcement that the exceptional press conference will be hosted not by Rossi’s Petronas Yamaha team or by his own representatives but by series promoter Dorna.

The special addition to the schedule will get underway at 1615 local time (1515 UK time).

Rossi is expected to race a Ferrari in the 2022 World Endurance Championship as well as running his MotoGP team.