MotoGP title contender Maverick Vinales is to start the European Grand Prix at Valencia from the pitlane, in a substantial blow to his championship chances.

Yamaha has had to carefully manage Vinales’ engine allocations throughout the season, with the Spaniard unable to use several engines from his five-unit allocation for the majority of the season as a result of Yamaha’s early-season reliability dramas. 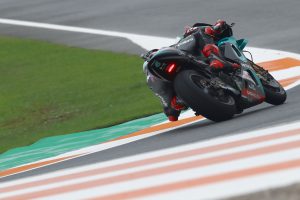 Suzuki: A Yamaha title win would have a ‘shadow’ over it
Read more

“In Aragon I did just a few laps in practices, I couldn’t make many laps, so I couldn’t set up the bike for the second race, and we paid for it, we made a bad race.

“Anyway, we are going to try it again in Valencia with fewer laps, try to set up the bike very fast. I will spend a lot of time in the garage, for sure.”

However, Yamaha team director Massimo Meregalli has now confirmed to Spanish TV that the team has decided to go above Vinales’ yearly allocation of engines with the penalty confirmed by MotoGP shortly afterward.

This means he will have to start the European GP from the pitlane.

He, like other Yamaha riders, were unaffected by the penalty awarded to the manufacturer and its two teams on Thursday for an engine irregularity.