The redemption of a rider Rossi justifiably gave up on

Back in 2018, Moto2 rider Romano Fenati committed what has since become the most egregious and infamous act of misconduct in the history of grand prix racing, when he attempted to grab Italian compatriot Stefano Manzi’s brake lever during the San Marino Grand Prix.

Despite immediate calls for the then 22-year-old to be handed a lifetime ban from the sport, he was instead forced to sit out the remainder of the season before returning in 2019, this time in the Moto3 class.

While there are still those out there who seemingly bray for his blood every time the Max Racing Team Husqvarna rider dares to achieve a good result, like he did at Sunday’s British Grand Prix with a well-deserved victory, the reality is that we shouldn’t be holding him to his actions of years ago – we should be applauding him as the ultimate reformed character in a sport that’s often far too quick to use and abuse youngsters then ditch them at the first sign of trouble.

Fenati’s history of difficult relationships doesn’t just go back to his incident with Manzi, but predates it substantially. First punished for a spur-of-the-moment angry outburst in 2015 when he was sent to the back of the grid for kicking out at Niklas Ajo during a practice start in Argentina, he was then involved in an incident with more lasting repercussions a year later. 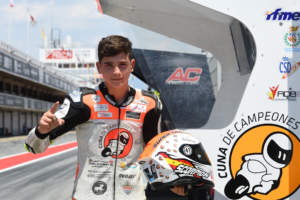 Finishing the championship in fifth, and going one better for 2015 in fourth, wins early on in 2016 meant he was in the hot seat to step up to their newly-formed Moto2 team for 2017 – until relations with team boss (and Rossi’s best mate) Uccio Salucci soured at the Austrian Grand Prix.

What exactly happened to see Fenati sacked halfway through a race weekend remains shrouded in mystery and rumour. There’s allegations of punches exchanged, a remote control turned into a projectile weapon and a hospitality suite that was left resembling the aftermath of a Greek wedding.

Whatever went down, Fenati’s exodus from the VR46 Academy followed immediately after. Joining the Marinelli Rivacold Snipers team in Moto3 for 2017, he came home in a very respectable second in the championship and stepped up to Moto2 with the squad for 2018, triggering a chain of events that ended with him in front of an FIM stewards panel (and very nearly in front of an Italian judge on charges of attempted assault).

But while we don’t know the details of what went down in the VR46 pit box, we do know what happened in both of Fenati’s two on-track incidents, and they share a common theme. In both cases he was completely in the wrong, but both incidents came as retaliation not as unprovoked attacks. Anger management issues? Most likely. But the psychopathic serial killer some want to portray him as? Far from it.

Had the latter got their way, it’s perhaps not hard to see a path that Fenati could have taken.

Just look at the case of Anthony Gobert – the Australian regarded by many as among the most talented people to ever swing their leg over a motorbike. Sacked from the Lucky Strike Suzuki team in the middle of 1997 for a failed drugs test, Gobert’s story has been a tragic one since, as he reportedly battles with addiction and mental health issues.

Thankfully, Fenati didn’t suffer the same fate. He was taken back in by the grand prix paddock, returning to Moto3 with the same Snipers team.

Given the support he needed in the first place, he hasn’t put a foot wrong since then – and in fact has established himself as one of the cleanest racers in the normally-chaotic class.

Of course what he did to Manzi was wrong, but he hasn’t gotten away without punishment for his actions, either, when you look at his former team-mate Bagnaia fighting for a MotoGP title on a factory Ducati while Fenati is still having to contend himself with occasionally winning Moto3 races.

And hopefully he won’t be the only rider to get a similar path to redemption after a single stupid act in the coming months, either, as Maverick Vinales sets out on a new journey with Aprilia to try and rebuild his own career following his high-profile falling-out with Yamaha.

Racing is, as all professional sport is, a dog-eat-dog world – but sometimes it’s worth remembering that the figures at the heart of it are in many cases barely adults. They’re young kids, and kids do stupid things – but not every action should carry a life sentence.