The extraordinary statement from Yamaha that Maverick Vinales was being suspended for “unexplained irregular operation of the motorcycle” has prompted intense speculation about exactly what Vinales did during the Styrian Grand Prix.

So far we’ve only heard from Yamaha in a brief press release announcing Vinales would not ride this weekend, as the team suggested that Vinales had attempted to deliberately damage his M1 at the end of last Sunday’s race.

“Yamaha‘s decision follows an in-depth analysis of telemetry and data over the last days,” the team explained. 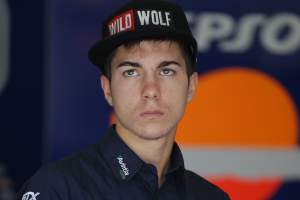 “Yamaha‘s conclusion is that the rider‘s actions could have potentially caused significant damage to the engine of his YZR-M1 bike which could have caused serious risks to the rider himself and possibly posed a danger to all other riders in the MotoGP race.”

So what exactly did he do wrong during the final laps of the race?

According to multiple accounts from eyewitnesses who have spoken to The Race, including trackside photographers, other MotoGP racers, and team staff in pitlane, Vinales was notably revving the bike aggressively as the race drew to a close, including in pitlane as he entered to retire with one lap remaining.

That’s a theory backed up by timing data, with speed trap records suggesting that he may have spent the final three laps of the race taking the main straight in fifth gear rather than sixth.

From lap two until lap 24, Vinales was consistently around the 190mph mark, setting lap times in the 1m25s bracket.

However, that changed for the final three laps, where he lost almost five seconds per lap, while crossing the line a whopping 12mph slower before finally entering the pits and retiring.

Over-revving the bike and repeatedly hitting the rev limiter, like The Race’s sources say was audibly noticeable, would fit with Yamaha’s statement of actions “potentially causing significant damage to the engine” and in the case of an engine blow-up, it could also have “caused serious risks to the rider himself and possibly posed a danger to all other riders” by laying down oil on the track.

It should be noted that Vinales had blamed a variety of mechanical problems for his performances during the weekend.

He cited a burnt out clutch, irregular dashboard messages, intermittent electronic rider aid failures and a bad Michelin tyre for the lack of progress he made in the restarted race after failing to pull away on the grid and starting from the pitlane.

And after top three practice times on Saturday only translated to ninth on the grid, he suggested the engine had been “stuttering” and that he had told Yamaha “the bike is failing or something” following his Q2 lap.

If Yamaha’s sabotage allegations are correct, the big question remains why Vinales would have attempted such a stunt – knowing that Yamaha would instantly be able to identify the issue, not only thanks to the extensive telemetry recording on his bike but because the main eyewitness on track was another Yamaha rider.

On lap 24, when Vinales’ speed first dropped significantly, he was overtaken by Cal Crutchlow, riding for Petronas Yamaha in place of the injured Franco Morbidelli – and undoubtedly able to hear Vinales’ machine as he overtook him.