Jun 8 2021
By Simon Patterson
No Comments

When KTM brought its new chassis to the Italian Grand Prix at Mugello, it was instantly apparent that something had changed for the factory and riders Miguel Oliveira and Brad Binder.

That’s been conclusively proved, with Oliveira finishing second at Mugello and the going one better last weekend at Barcelona.

Considering that before Mugello, 10th was KTM’s best qualifying of the season and its best race results were fifth places helped by crazy race circumstances, the upturn in form has been enormous.

Gone are the turning problems KTM had with the old bike, which has been replaced with a machine that’s seemingly much easier to ride – and which is more compatible with the 2021 Michelin tyre allocation.

That tyre element is of key importance to KTM, which was left fuming at the start of the year when the tyre that worked best for it in 2020 – and which Oliveira took to an outstanding home win in last year’s Portimao finale when with satellite team Tech3 – was removed from the allocation for this season.

With those issues gone, Catalan GP winner Oliveira was cautious when asked by The Race if he believed the hard times were behind KTM – but still quietly optimistic in his answer.

“I would like to say yes but you can never be too comfortable to give a clear answer to a question like that,” he replied.

“Every track has its own particularities and you always need to work on so many details to be able to finish the race, to have a good performance, to make a good qualifying.

“But right now I have to say that the bike is working well everywhere and even the racetracks where we’ve struggled in the past like Mugello, we’ve been able to have a strong weekend and hopefully we can do that in the upcoming tracks. Hopefully we can get in the mix early every weekend and try to do our best.”

It’s testament to KTM’s ability to develop and credit to its easily-modified tubular steel frame that it took only a matter of weeks to find a solution to its early-season woes.

Though initially KTM suggested the situation might be track-specific given its usual Losail weaknesses, it wasn’t relying on that behind the scenes.

Having first encountered issues at pre-season testing in Qatar in March (the factory riders’ only chance to trial the bike ahead of the start of the season), it set the team in action, working frantically to design a new frame that made its debut in early May at the Jerez post-race test. 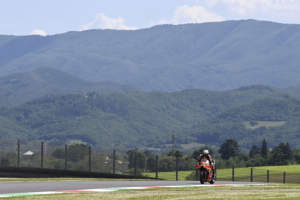 KTM was unwilling to run it at the French Grand Prix due to the changeable conditions, so it first appeared in anger at Mugello – and the rest is history, as KTM head of motorsport Pit Beirer exclusively told The Race.

“It’s not just the chassis – we worked like crazy since we understood in Qatar that we needed to use the bike in a different way to make the tyres work,” explained the former world championship motocross racer.

“It’s not news that we were missing a tyre from the allocation, and not to complain but it caught us on the wrong side.

“We had to rethink the whole package, and I’m really happy that it helped.

“On Friday morning in Mugello we didn’t know what to expect, but it was a clear step.

“I would say that we’re back on track.”

Not every manufacturer in MotoGP has the resources to turn around such a huge project in what was essentially only five weeks – but it hints at the size of the budget KTM is throwing at the series in an attempt to win.

Supposedly committing €250million over the first five years, it means that it can be reactive thanks in large part to the size of its substantial racing department – but that doesn’t mean that the task wasn’t a huge one, according to Beirer.

“I have to thank the boys at home because it was a big effort,” he added.

“It sounds so simple, to bring a new chassis, but it’s many hours and many things involved to make a step like this.

“When you produce it, you’re still not sure if it’s the right step – but you still need to do it for two riders, four bikes and spare parts.

“It’s a huge effort to bring a complete package to the track, but we’re pushing as hard as we can every single day. That’s nothing new for us.”

And KTM managed to once again show its commitment this Monday at the post-race test at Barcelona, when satellite riders Danilo Petrucci and Iker Lecuona got their first chances to try out the new frame for Tech3.

KTM had started serial production of it on the Sunday night after Mugello, when Oliveira’s podium success confirmed the direction it was going in, and the first response to the chassis from Petrucci was quietly positive.

“I’m happy about the feeling I have on the bike, even if we only worked with hard tyres and the lap time was not super fast,” he said.

“But we had difficult track conditions, so we will see in the next two race weekends how the situation is going to be on other tracks.”