Reigning MotoGP champion team Suzuki will finally join all its rivals in running a ‘holeshot device’ when the championship resumes after its summer break in Austria this weekend.

Pioneered by Ducati at the end of 2018, the devices lock the suspension to control the rear ride height, meaning power isn’t wasted compressing the fork.

Its first use was on the front suspension to assist with race starts, but Ducati later added a version to its rear suspension that could be used to improve power delivery on corner exits all around the circuits.

The system was steadily copied by the majority of the other factory teams, but Suzuki had not introduced its own until now.

Suzuki revealed the news in its in-house magazine, with the team’s technical manager Ken Kawauchi saying the summer break had created an opportunity to get the upgrade sorted at last. 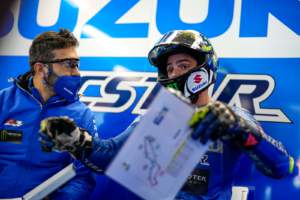 “Overall we have a very balanced bike, it’s something that we have deliberately strived for throughout the development of the GSX-RR,” he said.

“We know that if you improve one area you might lose in another, so we’ve always tried to make a very well-rounded machine which performs well at most circuits.

“Although we are satisfied with our 2021 bike, there are always improvements to be made, and we believe the introduction of the squatting device will help our riders to progress.

“Being in such a demanding sport means that we are constantly called upon to develop new solutions that suit our machine. The important thing is to keep the momentum; I believe that ‘constant development in the right direction’ is a winning philosophy in such a competitive championship.

“This long break in July allows us to make an in-depth analysis of where we are and implement new solutions that will hopefully be effective for the second half of the season.”

After its shock run to the riders’ title with Joan Mir and also the teams’ championship in 2020, Suzuki has had a low-key title defence so far.

It has yet to win a race in 2021, Mir is 55 points behind leader Fabio Quartararo and sitting fourth in the riders’ championship, the team is fourth in the manufacturers’ and only fifth in the teams’ standings.

Suzuki’s cause has been hampered by a string of errors from Mir’s team-mate Alex Rins that culminated in an injury absence caused when he crashed his bicycle while reading a message on his phone.

But it has also lacked the pace to challenge regular frontrunners Yamaha and Ducati, especially in qualifying – where it was already weak throughout its championship-winning season.

Rins estimated before the break that the absence of the holeshot device was costing Suzuki 0.2-0.3s per lap, while Mir said “We have to work to have the device as soon as possible so that we can start working with the same tools as the others”.