Valentino Rossi’s new Saudi Arabian sponsors have confirmed today that the nine-time world champion’s team will remain a part of the MotoGP grid until at least 2026, expanding on this year’s partnership with Esponsorama Ducati to likely subsume the Andorran-based team.

In a statement released by Tanal Entertainment Sport and Media, a Saudi operation headed by former deputy foreign minister Prince Abdulaziz bin Abdullah Al Saud, it was announced that from 2022 until 2026 that the Saudi state oil company would become the team’s title sponsor in the newly-billed ARAMCO Racing Team VR46.

The news unofficially confirms plans to expand Rossi’s efforts into a two-bike set-up, with 2021 already predicted to be the last year that the Esponsorama Racing team would retain its grid spots.

Esponsorama has already essentially reduced its efforts from two bikes to one for the current season after breaking Tito Rabat’s contract in order to sell one place to Rossi’s outfit under a joint-management effort that saw his half brother Luca Marini join the grid from Moto2 this year.

Marini is likely to maintain his place with the team for a second season in 2022, with current Team Sky VR46 Moto2 rider Marco Bezzecchi the most likely candidate to step up to join him. 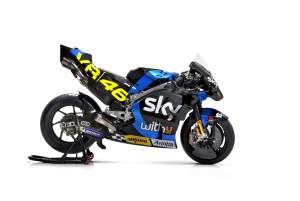 The announcement doesn’t confirm what machinery the team will be using, though, with Ducati still believed to be the prime contender but interest from other manufacturers also present.

Aprilia boss Massimo Rivola admitted to The Race he saw a potential VR46 tie-in as being of much interest, but also conceded that Aprilia’s number one goal was to remain with current partners Gresini Racing.

However, with fresh speculation that the team is set to withdraw from MotoGP following the tragic death of Fausto Gresini earlier this year, that could again open the door to Rossi’s outfit as the Aprilia’s RS-GP continues to improve.

Confirmation that Rossi has partnered up with Saudi interests has also drawn fresh criticism of sportswashing from fans, as the Middle Eastern country continues to regularly come under attack for its human rights record.

However, it presents one of the only options into MotoGP for Saudi Arabia thanks to series promoter Dorna’s close links to neighbouring Qatar.

A key venue for the series since 2004, it’s believed that Qatar’s contract to host the championship excludes Dorna from visiting other countries in the region, preventing a situation similar to F1 where Abu Dhabi, Bahrain and (from 2021) Saudi Arabia all have races.