Rossi ‘feeling like a real rider again’ in MotoGP testing

Valentino Rossi says he “feels like a real rider again” after the first of three days of testing at the Losail International Circuit, where despite finishing 13th he believes he’s made solid progress towards better understanding Yamaha’s 2021 M1 machine.

Rossi ended the previous two days of testing unhappy with his performance, but, after two days off and with fresh tyres under him, he sounded like a new man as he continues to learn his way around the Petronas Yamaha team. 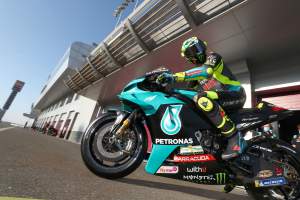 “We’ve worked hard and I’m happy with it, because I’m not at the top level yet but I’m a lot closer. We have to say that the first two [Jack Miller and Fabio Quartararo] and [Maverick] Vinales made impressive time attacks, but I felt like a real rider again today!

“On the second day of the last test, I had a lot of problems with the tyres, and I didn’t have very good grip. I suffered very much. Today, it looks like the tyres were better.

“The chassis is good, has helped me to improve the pace, and I’ve improved my riding style. There were come corners where I wasn’t strong enough, especially on the entry, and all together it helps.”

That has been in part aided by more time with Yamaha’s new 2021 chassis, one which attempts to give the M1 the consistency that Franco Morbidelli enjoyed in 2020 from his year-old bike, but modified to hold the frozen ’20 spec of engine that Rossi (and factory riders Quartararo and Vinales) will use this year.

Originally skeptical about it after the initial two days of testing last weekend, Rossi admitted today that more time with the bike has brought a benefit, and that there’s plenty of progress to still find.

“I rode well, we improved, and we tried new stuff,” he said. “We continued to compare the new chassis, and it was positive. In the end the day was not so bad, when everyone was so strong. We’re still missing a little bit, but it’s just the first day and it’s a good start.

“The new chassis is better, because it turns better. Unfortunately we lost some of the turning with the 2020 chassis, but this one from this point of view is better.

And, perhaps even better than anything he may have found on the bike, Rossi says that going fast has brought the 42-year-old something of a psychological advantage. Never a fan of testing and definitely someone who goes faster on race day, he’s sounding upbeat about what he’s managed to achieve.

“When you try good stuff, it’s better for motivation. When you don’t find the right motivation and the right concentration on a long day of testing, it’s not easy. I feel better physically, too, than I did after the first test.”

That’s a better ending to the day than team-mate and protege Franco Morbidelli enjoyed on the other side of the Malaysian team’s garage, despite finishing two places ahead of Rossi in 11th – but over a second from fastest man Miller and former team-mate Quartararo.

“It looked like I was a bit far off from the pace,” he admitted, “and also in the speed in one lap, but I didn’t try a time attack yet.

“My last run was really good, but not awesome, like the others did. At the moment I don’t feel like I have the same potential as the others, at least as Fabio. We’ve got to work to increase our potential.”