Yamaha rider Fabio Quartararo has undergone surgery for the arm pump that sabotaged his Spanish Grand Prix and cost him the MotoGP championship lead on Sunday.

It means that next week’s French Grand Prix will mark the second time in three years that he will prepare for his home race in an operating theatre, after previously undergoing the same procedure on his right arm in May 2019. 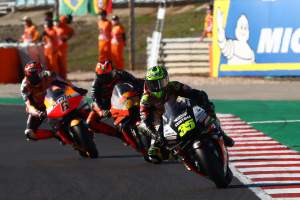 What is arm pump? The scourge of MotoGP riders explained
Read more

Exact details on the procedure he underwent has still to be confirmed, with only a brief statement from the Frenchman so far released on social media.

“The doctor told me that the surgery for arm pump went very well,” it quoted Quartararo as saying.

“I’m really looking forward to start working on the arm this week so that I can be 100% fit in Le Mans.

“I am feeling very positive about my recovery and can’t wait to ride my M1 again.”

Quartararo looked to have Sunday’s race at Jerez sewn up until hit with the debilitating condition in the closing laps.

It led to him fading back through the pack to 13th and allowed Ducati rider Jack Miller to take victory.

It would have been Quartararo’s third straight victory and would have cemented his position atop the championship table, but instead he fell to second – two points behind Spanish GP runner-up Francesco Bagnaia.

“All the years that I’ve been here in Jerez [the arm] was good,” Quartararo said.

“Last year was not a problem and this year was just, I was in the lead, and as soon as I had a one-second lead I had no more power.

💬 @FabioQ20:
"The doctor told me that the surgery for arm pump went very well. I'm really looking forward to start working on the arm this week so that I can be 100% fit in Le Mans. I am feeling very positive about my recovery and can’t wait to ride my M1 again."#MonsterYamaha pic.twitter.com/v3oSMsOjCN

“And I still fought for six more laps with the pain to keep one second [ahead of Miller], but it was just impossible for me, no more power.

“It was dangerous for me to ride for half a race, but I didn’t want to stop because I knew that maybe one or two points can be really important for the championship.

“I gave it all, and unfortunately, I had this issue.”