In any kind of team sports, the adage that any single person is “carrying” their team is obviously always hyperbole. As great as Leo Messi is, replace the 10 guys around him with 10 random blokes from the street and Barcelona loses every single time.

Yet if you limit the argument only to those who ride the bike, Marquez has carried Honda. He is its one-man army. His handprint is immediately obvious on every major trophy the manufacturer has brought home in MotoGP in recent years.

In 2019, the last year he was fully fit, Marquez scored enough by himself to not only win the riders’ title by a mile, but ensure the manufacturers’ crown for Honda, too. Admittedly, he needed a bit of help in making it a hat-trick of titles with the teams’ championship, but it was 25 points of help – compared to the 420 points he himself brought in.

His mastery of the RC213V is next-level compared to others, and the discrepancy between him and mere mortals on the Honda is likely to return once he’s back to full fitness. It already kind of did in the damp conditions at Le Mans.

All of the above sets up a crucial caveat – Fabio Quartararo is no Marc Marquez yet when it comes to Yamaha. He wasn’t even its top scorer last year, and team-mate Maverick Vinales is currently within a race win’s distance in the standings. Quartararo has bested the other M1s so far, but he’s hardly demolished them.

Forget Quartararo being on pole, and forget the double overtake on Jack Miller and Vinales to reclaim the lead. OK, maybe don’t forget that, it was awesome, but Quartararo’s French GP is most notable for when the rain kicked off in earnest.

Yamaha is not the bike to bet on in those conditions – it strongly prefers a fully dry track or a fully wet track – and Quartararo has very much looked like not the rider to bet on. He reiterated repeatedly after the race that, having never claimed a top-three finish in a wet race even in Moto3 or Moto2, he “never expected a podium in these conditions”. 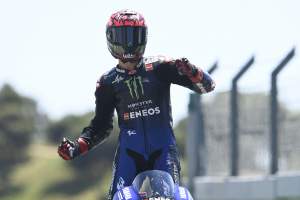 Yet there he was, taking home a third place, while the other Yamahas quietly finished 10th or lower.

“I just think Fabio had enough courage, when it was raining, with the slicks, and he just took to us 20 seconds,” said Vinales when asked by The Race whether Quartararo’s performance could contain the answer to Yamaha’s long-standing mixed-weather woes.

It was an admirable answer from Vinales, to a question I half-expected to be met with a ‘dunno’ and a shrug. And it does largely live up to scrutiny – on the in-lap, Vinales went from three seconds back from Quartararo to 18 seconds back.

It’s also true that Vinales did well to jump into the lead initially, and that he, already a winner at Le Mans, could’ve certainly given Quartararo or Miller a run for their money had the race stayed dry.

“I had a lot performance under my seat,” Vinales said. “I just had shit weather, man. Shit weather.”

“Shit weather” indeed, but that kind of “shit weather” is too common not to be meaningful. Those mixed, borderline no-grip conditions arguably rear their head more often than a full-on soaked track. 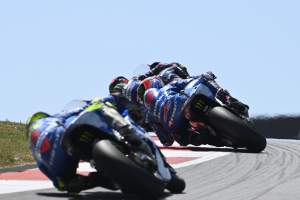 And therein lies the problem for Vinales – on his day, he’s every bit as quick and probably even quicker than Quartararo, but his peak operating window is very narrow, even in the dry. Clearly, that has not changed this season.

By the time Vinales’ current deal runs out, he’s almost certain to get his Yamaha win total into the double digits, but Lin Jarvis and co. could be forgiven for giving up on the idea of Vinales bringing a title to Iwata.

The more versatile Quartararo clearly towers above Vinales in terms of title credentials, and as for the other factory-spec Yamaha of Valentino Rossi, they basically ride in different races.

The comparison that’s less clear is that with Quartararo’s ex-team-mate Franco Morbidelli, just because we don’t really know how big a handicap having a 2019-spec machine is for the Italian. It certainly wasn’t much of one last year, but if Morbidelli’s late-2020 form (overall and particularly relative to Quartararo) is informative, so too is their first season as team-mates when Quartararo smashed Morbidelli as a rookie.

But whatever the nuances of the current comparison, Quartararo is nearly already 50 points clear – a gap flattered Morbidelli’s technical issues in the opener and mistake passing Pol Espargaro at Le Mans, albeit with both of those countered by Quartararo’s Jerez arm pump disaster.

That remains the one big doubt lingering over Quartararo’s title credentials, even after he’d had surgery immediately post-Jerez.

“You know, when you think back about Jerez, it’s a big shame because I was there to win, to be clear with you, because I was feeling so great,” Quartararo told MotoGP’s After The Flag at Le Mans. “And when you have this surgery, it was tough to accept, but then you say ‘OK, it happens’, we arrive here and straight away I felt good, [though in] a bit of pain.

“In the race maybe even better but you have these conditions that you don’t make 27 laps at the limit, it was more like [a] mental [challenge] – and we did it.

“Honestly, after surgery and everything, to be on the podium is amazing.”

The physical question mark remains, and the upcoming Mugello race will be a bigger test, but as Quartararo rightly points out he certainly coped with the mental aspect of it at Le Mans. And even Marquez, even before his big injury, wasn’t exactly bulletproof in terms of health – even if that never quite had as dramatic an in-race impact as at Jerez last year.

Zarco also did point out that the two upcoming races, Mugello and Barcelona, are favourable to Ducati. He also could have pointed out that the 2021 MotoGP calendar now contains two Red Bull Ring races, which is clearly not great for Yamaha. But there are also obviously tracks the M1 will relish – and right now, with Quartararo, most tracks fall into that category.

Pace-wise, he has been up there again and again. He has reeled off three consecutive poles at three very different tracks in different conditions. It’s not the 2019-spec Marquez freakery of being top two in every race, but something has clearly clicked, even while other Yamaha riders are scratching their heads.

And as Marquez and Honda showed, if you have one rider who’s really gelled with your bike, that’s really all you need. Just as long as they stay healthy.