Petrucci irked by mid-session news of his MotoGP replacement

Danilo Petrucci says he’s “surprised by the behaviour of some people” after the news that he’ll be replaced by Moto2 stalwart Raul Fernandez at the Tech3 KTM team was released mid-session at the Styrian Grand Prix.

Two-time MotoGP race winner Petrucci was expecting to be dropped by the Tech3 KTM outfit after a difficult first season since switching from the factory Ducati team. The 30-year-old Italian finds himself down in 17th in the riders’ championship, with a fifth place at Le Mans one of few highlights this season.

While Petrucci was anticipating the announcement, KTM had remained firm that no decision had been made as the field arrived at the Red Bull Ring.

But partway through the final practice session before qualifying, KTM confirmed that the current Moto2 title contender Fernandez would join fellow rookie Remi Gardner at the Tech3 KTM squad in 2022.

“I was absolutely not surprised about the news because I think I was the only one to know that news,” Petrucci said after qualifying 22nd. 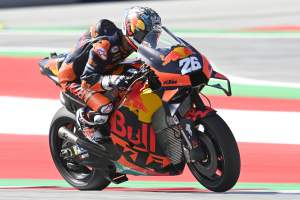 “We expect it, because when someone doesn’t answer the phone, you’re surely not renewing the contract. But at least answering the phone is a matter of education [respect].

“We didn’t achieve what we expected, I was the first one in Assen, to say if I was in the [the shoes of] KTM, I would sign Raul.

“But then all the interviews, was quite funny to see they still act like nothing was decided. But instead, it was decided.”

This leaves Petrucci and his team-mate Iker Lecuona without a ride for next season, and with very few vacant rides left on next year’s grid.

Although he wasn’t surprised by the decision, Petrucci was left unimpressed by KTM’s handling of the situation.

“I achieve more than I expected in my career,” he said when asked by The Race what’s next for him.

“For sure my childhood dream was to win the world championship, and I start to understand that it’s not possible anymore. I arrive quite close to the top, especially in 2019, I was third for most of the season. 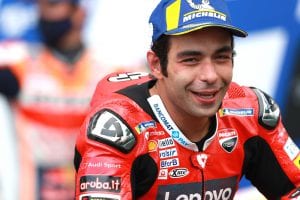 “The deepest thing I want is to ride motorbikes, and especially in the last season, I was having more fun riding dirt bikes with my friends who were coming to the races, even if I tried my everything.

“For sure, it’s not a surprise, I’m more surprised by the behaviour of some people, and I’m not going to say the names.”

He said the news hadn’t changed his approach during qualifying, and that he’d “understood this year that I have to ride for myself”.

His team-mate Lecuona also said he’d expected the decision for sometime now and that he has options elsewhere on the grid still.

Tech3 team boss Herve Poncharal was also critical of KTM’s announcement calling the timing of it “weird” and saying that it was originally agreed that a decision would be made on Sunday.