Aprilia MotoGP racer Aleix Espargaro says that his British Grand Prix third place, the Italian marque’s first premier-class podium finish in 21 years, is a message to new signing Maverick Vinales, as well as confirmation to him that the RS-GP machine is a competitive bike now after a year of impressive development.

Looking strong all weekend and showing beforehand that he had the pace to deliver a podium performance, Espargaro had to hold off the advances of Ducati’s Jack Miller in the final laps of the race to retain third – but was not only able to race with him but to re-overtake him to ensure the result. 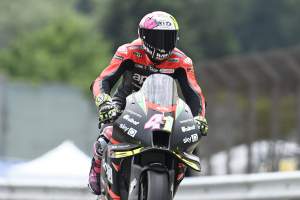 Friendly but combative – Espargaro is poised for Vinales
Read more

And with the performance looking almost flawless from both Espargaro and the bike, he says that Vinales will find a much better Aprilia than many would have imagined – even if it’s somewhat unusual circumstances that has led to his arrival in the team following a dramatic ousting from Yamaha.

When asked by The Race what message this podium should send to Vinales, Espargaro said: “If someone told you at the beginning of the season that he would finish with Yamaha and go to Aprilia, you would have told them that it was taking 10 steps back, and obviously the way he finished with Yamaha wasn’t that nice. But it’s not that bad, because the Aprilia is a competitive bike.

“We’re not yet at the level of the Yamaha, that’s for sure, but we are on the way and I think that he will enjoy a lot riding the Aprilia.

“He’ll jump on it in two days’ time in Misano and he will have to adapt because it is a completely different story from the Yamaha, but as I showed today the bike is on the way.” 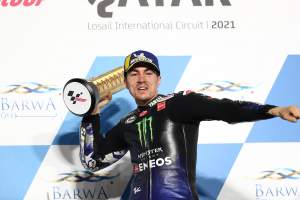 He wasn’t the only person to have similar thoughts after the race, though, with Miller echoing Espargaro after getting a chance to see the Aprilia in action first-hand – and insisting that the more manufacturers at the front the better, on the day when MotoGP saw six factories in the top six for the first time since 1972.

“For sure he’s rubbing his hands together, I mean, it’s always nice, he seems like he’s picked a perfect time to jump to Aprilia,” said the Australian after finishing fourth.

“I think it comes down to all the hard work Aleix and [Lorenzo] Savadori and the past riders have been doing in Aprilia. They’ve been working really hard, since I got to MotoGP.

“It’s awesome for the sport.”