KTM Motorsport boss Pit Beirer has exclusively confirmed to The Race that plans to see Dani Pedrosa returning to MotoGP action in 2021 as a wildcard rider are progressing, and that he’s hopeful that the three-time MotoGP runner-up will line up on the grid later this season.

Pedrosa hasn’t raced since the end of the 2018 season, when he retired after an incredible 13 seasons with the Repsol Honda team. Since he joined KTM for 2019 as test rider, a wildcard appearance for the 31-time MotoGP race winner has been wishful thinking for many fans since then, but until now has remained just that.

However, confirming rumours that Pedrosa is finally drawing close to returning to MotoGP action, Beirer sounds confident that KTM can convince him to make a return later this year as it continues to develop a whole new generation of RC16 for 2022.

“You can feel like slowly there is an option with Dani,” the former MXGP race winner told The Race at the Portuguese Grand Prix. “He hasn’t said yes, and you cannot push him, but I feel like the new bike for next year is coming better and better and as soon as he saw that he had an interest in doing a wildcard for us.

“There is some truth to it, but Dani hasn’t committed yet and it’s a very fragile discussion! 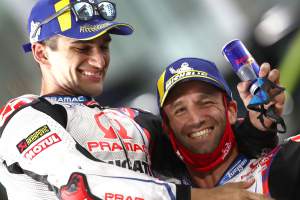 How Pramac built its KTM-flavoured 2021 MotoGP dream team
Read more
“We can’t thank Dani enough for what he has done for us, so if he decides to just continue to test, that is enough. If he is open to doing a race, we will jump in the air, but we won’t force him because he decided to quit racing.

“If he does it, we don’t want to do it to have a race result – we really want to find out what the bike does for next year.”

Pedrosa been heralded as a key part of the breakthrough that saw KTM take three race wins last season with Miguel Oliveira and Brad Binder.

But Beirer is insistent that KTM is still only beginning to fully integrate Pedrosa’s ideas into the bike, and that the 2022 machine – which will be the bike that Pedrosa will race should he elect to ride – will be the first machine to be truly developed by him.

“That’s also his motivation,” Beirer said of Pedrosa’s urge to help KTM develop the RC16. “He doesn’t want to prove something because he stopped his racing career in peace, happy and almost healthy, but for bike development he’s done some great things.

“But a race is different, and with this transition bike he could influence it a lot.

“The next bike will definitely have his signature on it and he has huge interest in the bike performing.

However, while plans are progressing nicely, there’s still no set date for when we’re likely to see Pedrosa back in action.

“We have no time schedule for it,” Beirer said, “but we definitely have a big interest in bringing this bike to a wildcard race to see where we are for next year. It’s always in racing where you see the best of a bike.

“Austria could be the place for it, but it has to be in the second part of the championship because we really have so many things to do to get this championship going and the bike back to a normal performance.

“We don’t want to focus too early on Dani and the new bike, and there isn’t really a favourite track yet.

“Of course, we have to choose one that Dani also likes, but the discussion still isn’t as closed as some think.”