No asterisks, no question marks - Mir deserves his title - The Race
Skip to content
MotoGP

No asterisks, no question marks – Mir deserves his title

A considerable amount of column inches in 2020 have been devoted to chat about what makes a worthy world champion.

But honestly, after the season we’ve had and the performances he’s put in, if you think Joan Mir isn’t worthy to wear the MotoGP crown you’re severely deluded.

That conversation about worthiness started before the delayed season even got underway, before we even knew how many races MotoGP bosses Dorna would be able to host in the midst of the coronavirus pandemic.

Would only a handful of races mean the season was worth less than last year’s 19-race slog? Would only having to be consistent for 50% of the time make you less worthy?

Well, that was put to bed before things started when Dorna announced a 14-race calendar that, even if it did feature back-to-back races at the same tracks, still looked to have a solid spread of events.

And since the championship has got underway, it’s been proven even clearer that 2020 carries the same worth as any other season.

MotoGP has done a stellar job in keeping the show on the road, the compressed schedule has ramped the tension up to 11, and the riders who have managed to keep their cool have been the ones to come out on top.

There’s no better example of that than Mir, either.

Ice cool throughout despite a rocky start for him in the opening three rounds, he has shown without doubt that he has the requisite abilities required to win a title not just over any long MotoGP season but over the most hard-fought and tense one in history.

Once that was taken care of, the next question emerged. 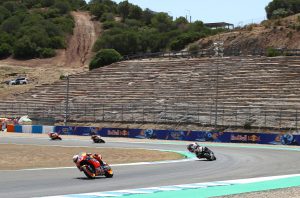 Is a title without Marquez worth less? Depends who wins…
Read more

Was a title without reigning champion Marc Marquez, injured at the first race, one worth winning?

Would it be remembered as a victory in its own right, or would it permanently have an asterisk beside it?

Well, I argued since day one that it always depended on who the eventual victor was.

If it was, say, Andrea Dovizioso who won it, then there was the possibility of a question mark.

He was unable to beat Marc Marquez in a straight fight for the last three years in a row, so there’d always be a shadow over his successes had they come in 2020 with Marquez absent.

But if a young gun went on to lift the crown, then things would be different.

Mir has never fought Marc Marquez for a race win, let alone a championship. Yet he’s one of a very different new breed of riders, and will undoubtedly have been one of the ones to eventually depose Marquez in the future anyway.

And thankfully, the third question has already been conclusively answered by Mir himself getting rid of the tag of being the championship contender who still hadn’t won a race. 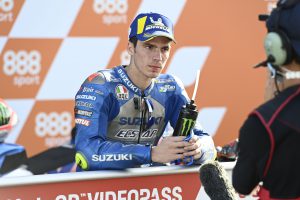 You don’t need to win a race to win a title, as has been shown in the past – but especially not when you’ve got the form of Mir in 2020.

With him double the number of podiums of his closest rivals and being there or thereabouts almost every weekend he finished, the only reason the question even arose was because he was cruelly denied a runaway victory by red flags at the Red Bull Ring.

But, thankfully, it’s not a question that’s up for debate anymore anyway, after a textbook win at the European Grand Prix that showed all the strengths of Mir’s 2020 season.

Comfortable enough to easily be in podium contention, he sat tucked in behind Suzuki team-mate Alex Rins, happy to let him do all the hard work until he made a mistake.

Ready and poised for the tiny error, Mir took his chance with minimal risk, got in front, and pulled away as if he’d been leading MotoGP races all his life and wasn’t a 23-year-old in only his second season.

So long story short: if you think Joan Mir doesn’t deserve a 2020 title, then you and I haven’t been watching the same manic season!