All motorsport series face extremely tough times as they try to stay in business through the coronavirus pandemic, and MotoGP is no exception.

But it has already taken preventative measures that it hopes means the championship will be able to get up and running in a healthy position as soon as possible after the resumption of everyday life.

In his role as president of MotoGP teams’ body, the International Race Team Association, Tech3 KTM boss Herve Poncharal has been in the thick of these efforts.

He’s been liaising heavily with series organiser Dorna both in his Tech3 capacity and as all the teams’ representative on the series’ central committee. Poncharal believes MotoGP has already accomplished much to be proud of as it responds to the crisis. 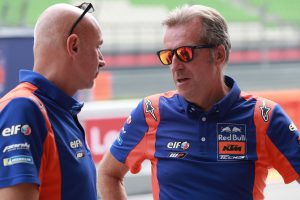 Ten race MotoGP season would be ‘like a dream’
Read more

“Since before the Qatar weekend and since, I’ve been in constant communication with [Dorna chief] Carmelo Ezpeleta, his son Carlos and with [founder] Mike Trimby at IRTA,” Poncharal tells The Race in an exclusive interview.

“We’ve all been doing our best to find solutions, but of course, as the world situation deteriorates almost day by day, so have our plans been made invalid only a few days after we make them.

“Our ambition right now, Dorna and IRTA, is to try and see how we can help the grid.

“Clearly we need to keep the grid alive because if it stays healthy then it’ll be much easier to start racing again.

“If companies close, go bankrupt, then staff will have to find new jobs and teams will be split up. To rebuild the grid after that would be a long and painful process, so the target is to see what we can do.” 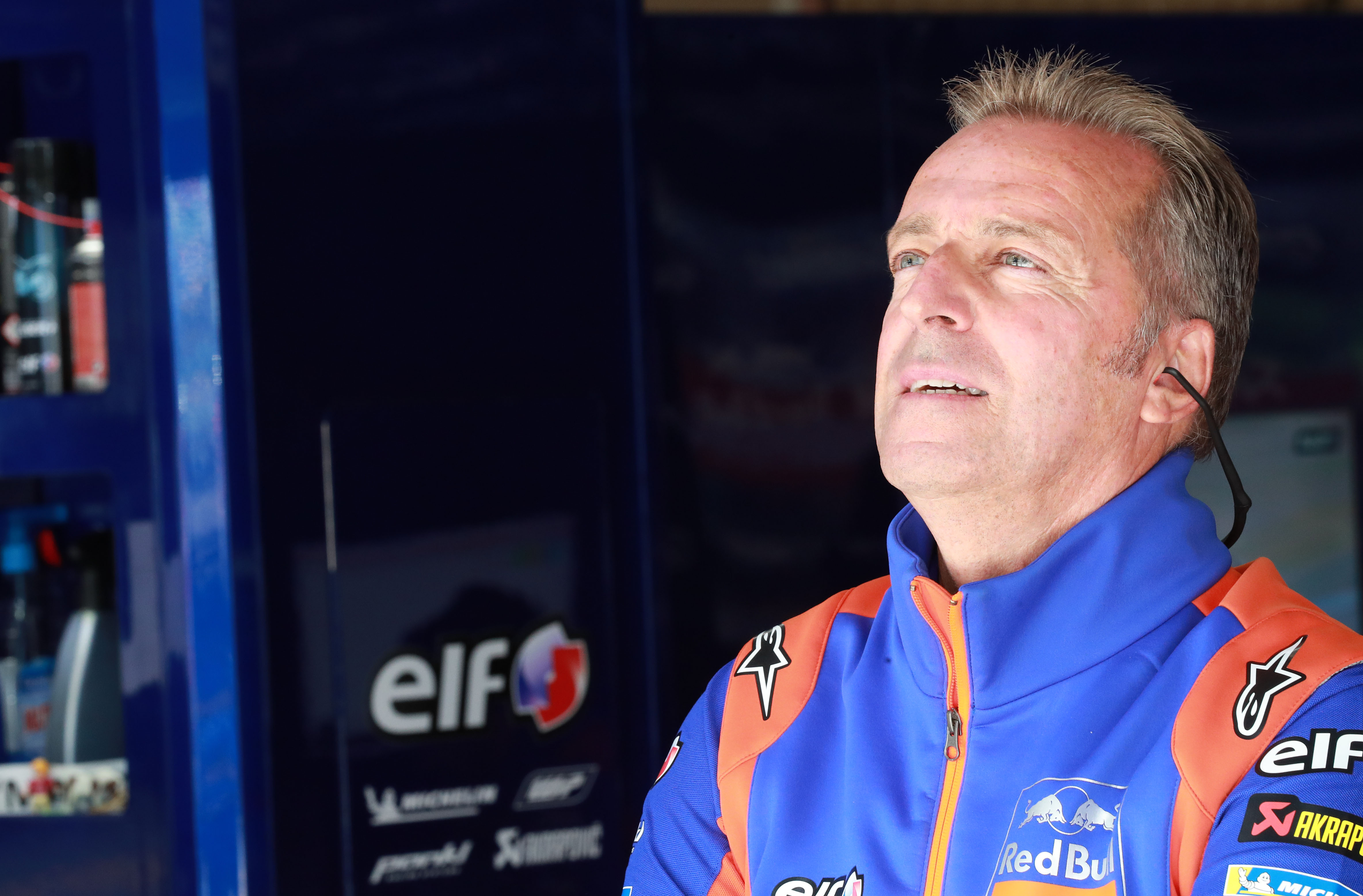 That process started with financial aid to the series’ independent MotoGP teams and squads in Moto2 and Moto3, which was announced last week.

While that’s enough to keep the teams running through the immediate months ahead, Poncharal is adamant that even with the help of MotoGP series owner Bridgepoint Capital, it isn’t sustainable.

“Unfortunately, we have no more financial resources, because most of our money comes from sponsors and many of those companies are struggling as much as we are,” he says.

“They won’t be able to honour contracts but no one can blame them, because they are fighting for their lives as well.

“We have to remember that Dorna is not a bank, as well. Some teams come to me and say ‘Dorna needs to help us’, and they want to, but they’re essentially a team too, just at a bigger scale. So instead we’ve spoken to their owners, Bridgepoint Capital.

“Until all those nationalities can travel together to the same place without restriction, we can’t race. And maybe some countries will have stricter rules, but we don’t know yet” :: Herve Poncharal

“I have to say, normally you hear that big hedge funds have no heart, that they are only interested in profit and in squeezing companies to get the last drop out of them – but they are both good business people and they have a heart.

“They understand that MotoGP has more value if it is ready to race again afterwards, so Carmelo is talking to them.

“IRTA has made a small gesture to the Moto2 and Moto3 teams, but we are not a bank either. The association has always been run in a good way – we say in French that it’s like a farmer, with its feet always on the ground.

“We’ve always been careful and there was a little bit of money in the bank, so we decided to use that to share it among the grid. That is money that belongs to the teams but we’re proud we had it to give back to them now.” 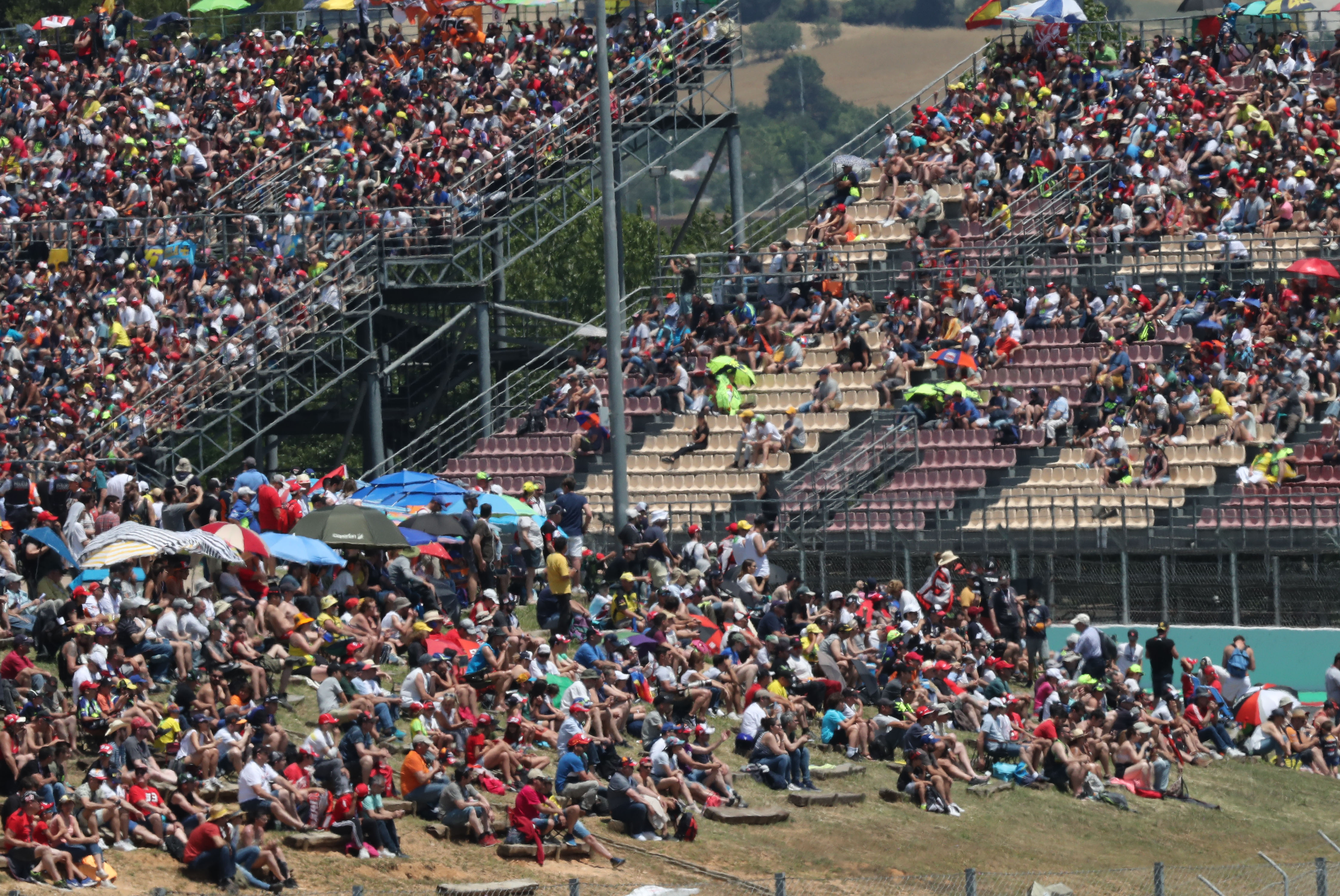 When exactly the season will get underway also remains in doubt. With most of Europe still locked down under travel restrictions and with only limited signs of the bans being lifted, Poncharal is hoping that we’ll at least understand in the coming months what the next step is.

“By June, we’ll have a clearer picture of the situation and maybe some idea of when we can restart – and if we can race at all in 2020,” he says.

“We have to think about and prepare for the worst-case scenario. No one wants to talk about it in case it brings us bad luck, but Winston Churchill once said that to govern you need to foresee. 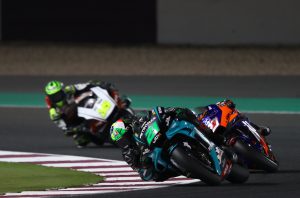 “Of course, there are other scenarios too, but we have to prepare for the worst of them just in case.

“In Qatar only a few weeks ago it was completely unthinkable, but now it is a possibility because we don’t know what the virus will do or how long the travel bans will last for.

“Our strength is that we are international, but it is also a weak point.

“If you wanted to organise a national race in the UK or France or Germany it might be possible in Germany, but we have so many nationalities making up our grid. North and South America, Australia, Japan, Thailand, Malaysia, every country in Europe.

“Until all those nationalities can travel together to the same place without restriction, we can’t race. And maybe some countries will have stricter rules, but we don’t know yet.

“It’s difficult because people always want to control their destinies and make plans, but right now humankind is an engine that is still running but the chain is broken.

“We’re revving but we’re not moving, and it’s going to take a long time to repair the chain.” 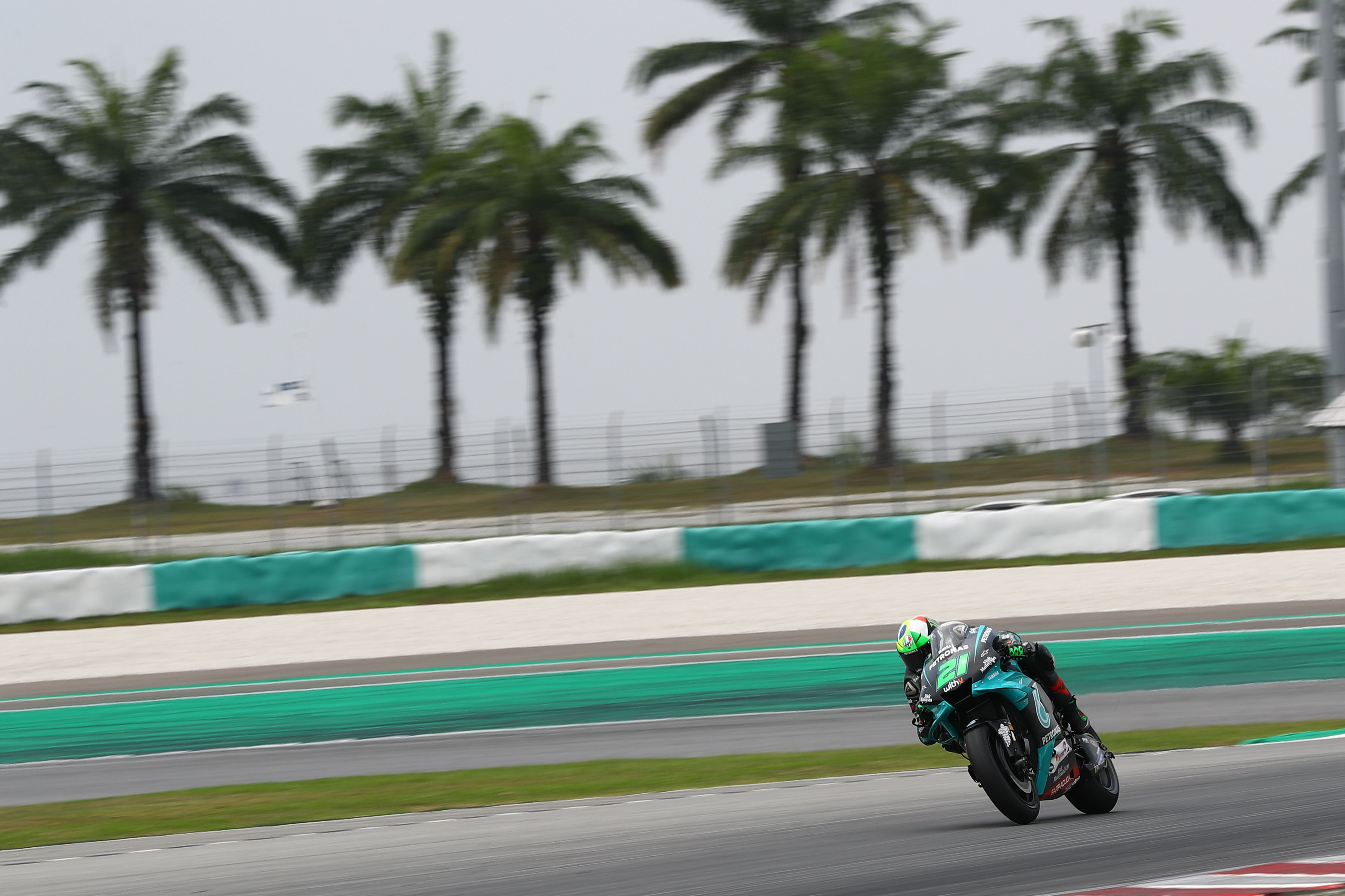 The financial implications of what comes next will have an immediate effect on the 2021 season, with a technical rule freeze already all but agreed for MotoGP set to be expanded to the smaller classes as well.

“Right now the IRTA and Dorna technical departments have been doing a lot of work to ensure that Moto2 and Moto3 have the same freeze as MotoGP for 2021,” Poncharal explains.

“There are a few more things to finetune, but the plan is that all three classes will race what they were going to race in 2020 this year should we get some races and in 2021.

“It means that in winter 2021 the factories won’t have to make any research and development investment, and hopefully, that helps them out.

“I think right now the ones that suffer the most are the European teams, but it will allow them to focus their efforts and to spend their money on keeping their companies alive.

“We’re working on changing the lease fees for independent teams as well. 2021 will be a very different world because a lot of sponsors might disappear, some might stay with a lot less money, and teams will for sure not have the same budgets as they had in 2019.

“Within it, I’d like to think that MotoGP will be healthier but will also be better able to match the needs of the world. We need to think about how to improve because we will need to adapt afterwards to the new world” :: Poncharal

“Hopefully freezing the spec will help the teams without harming the show. 2020 will have to be a year that is forgotten, but the grid was very competitive in all three classes already.”

While taking immediate precautions to prevent MotoGP from falling into disaster, Poncharal is also keenly aware of the potential for troubled waters ahead.

With Tech3 one of the independent teams able to successfully negotiate the 2008 financial crisis and its aftermath, he’s quick to issue warnings that steps need to be taken now to prevent another recession-induced disaster in the series.

Dealing with the implications of that crash led to a number of manufacturers withdrawing from motorcycle racing and the MotoGP grid sank to its smallest size in the modern era.

It was able to recover in part thanks to Dorna’s generous financial agreements with teams and in part due to innovative rules like the CRT bikes. Now Poncharal is pushing already for changes to be made in response to this crisis.

Thankfully, timing is on his side, however, with teams set to sign a new five-year contract with Dorna ahead of the start of the 2022 season – meaning that they can now start the arduous work of reworking the deal to be leaner. 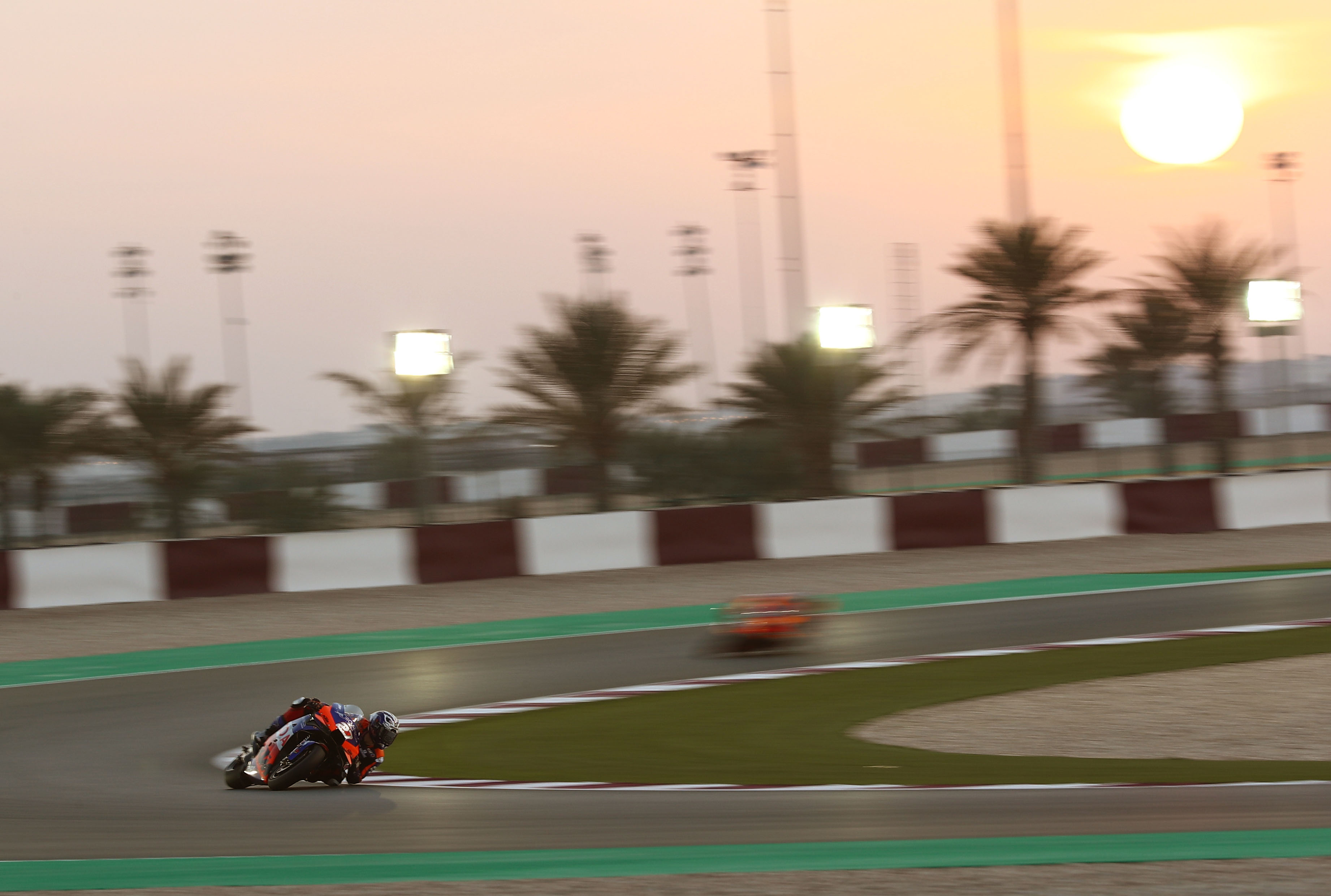 “Freezing the spec for one year will help, but maybe we will have to re-evaluate the technical rules in 2021 anyway because the current contracts with the teams run from 2017 to 2021,” says Poncharal.

“We were already preparing the new contract for 2022 to 2026 and a lot of things were almost complete, but I think that work has gone in the bin now.

“We’ll face a different economic environment and we’ll have to find a way to fit into it.

“We have some ideas about other ways to reduce costs, and throughout 2021 we are going to have to continue to work on those. The bigger you are, the more fragile you are, and it’s very important to always have flexibility.

“If you look at Darwin’s work, the species that survived through climate change and events like the end of the dinosaurs, it was always smaller animals who could adapt.

“Hopefully, it’ll soon be behind us, but in a way, I think the world will be different afterwards. To be stuck at home for one or two months gives you time to think, for people who are used to always running from one airport to another and with no time to rest.

“I would like to be optimistic and to think that hopefully we’ll try and make a better world afterwards.

“Within it, I’d like to think that MotoGP will be healthier but will also be better able to match the needs of the world. We need to think about how to improve because we will need to adapt afterwards to the new world.”