Jake Dixon says he’s looking forward to completing some unfinished business on the Petronas Yamaha bike at next weekend’s Aragon Grand Prix, after it was confirmed that he would continue to replace the injured Franco Morbidelli for a second weekend, amid fresh speculation that he could yet be in line for a 2022 MotoGP seat with Yamaha.

It means that he will join Cal Crutchlow to ensure we once again see two British riders on the MotoGP grid in a season where the UK started without a premier class rider for the first time since 2010.

Dixon was one of a number of riders left confounded by issues with MotoGP’s control Michelin tyres during his debut at the British Grand Prix, a situation that The Race’s sources within the French manufacturer have put down to cooler-than-expected temperatures on race day and a lack of experience on Silverstone’s aggressive new surface, which had previously only been raced once in 2019.

“To be honest, I’m frustrated,” admitted a disappointed Dixon after his home race, “and it wasn’t an ideal situation for me. After morning warmup I had really good pace and I thought I could go with the group off the back of the main pack, but unfortunately, the bike and the grip level definitely did not feel the same in the race. 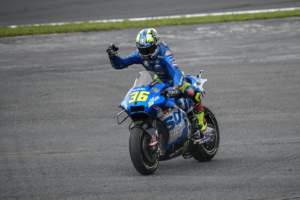 “It felt like I was riding two different bikes, and it’s very frustrating to finish that way after such a strong weekend. There are certain things on my mind that make me want to have another go on the bike and that I would love to lead to something more, but who knows?”

It remains to be seen whether there’s any faint glimmer of that happening for Dixon regardless of his potential on the Petronas Yamaha at Aragon, though.

The newly-branded WithU Yamaha team looks set right now to be comprised of returning championship runner-up Andrea Dovizioso and McPhee’s Moto3 team-mate Darryn Binder, who looks set to step up thanks to a cleverly-worded contract of his own signed before title sponsor Petronas withdrew and the team shuttered the Moto2 squad Binder was originally destined for.

However, according to The Race’s sources within the paddock, Yamaha is keener to see Dixon remain on the bike alongside Dovizioso for 2022 than Binder. Already fronting the cash to pay the Italian’s salary after poaching Morbidelli to replace Maverick Vinales in the factory team, it remains to be seen whether it can also find the cash to buy Binder out of his deal with the team and to create a seat for Dixon.

That fits with comments made at the British Grand Prix by Yamaha racing boss Lin Jarvis, who hinted in an interview to BT Sport that there might yet be potentially a chance for the team to take the British rider. 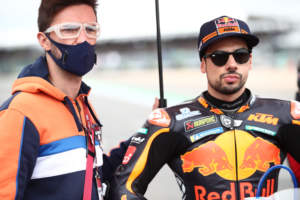 “We haven’t got a fixed plan right now,” said the team boss when Dixon’s name was put to him. “We’re in discussions, Jake is doing well, and let’s see. He could be one of the options.

“Obviously, Darryn is one of the options that is being talked about, and there are other candidates that we have been talking to. It’s not our number one priority but I think in four weeks’ time it will be defined.”

The option to ride the Petronas Yamaha was originally given to Dixon’s Moto2 team-mate Xavi Vierge for this weekend, so that both riders would have had the chance to trial a MotoGP machine at their respective home races, but it’s believed that Vierge turned down the opportunity as he instead concentrates on a strong end to his season in the middleweight class in order to secure a ride for 2022. 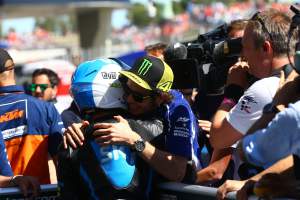 For Crutchlow, Aragon more likely marks the end of something than the beginning, however.

Confirming after the British Grand Prix that he will once again line up in Monster Energy colours for the Yamaha squad at the Spanish race, it looks set to mark his final time as a factory rider for him as Morbidelli prepares to make a return at the next round at Misano on the blue bike rather than his Petronas machine.

Once again set to ride in a testing role rather than as a full-on racer, it means that we’re not going to see any fireworks from the 35-year-old as he concentrates on developing components and gathering data for Yamaha’s 2022 machine rather than setting out to score points.

But, with the strength of its current combination of Fabio Quartararo and the M1, it could well mean that his role is more valuable than helping to secure the team prize in the longer term for the Japanese manufacturer. 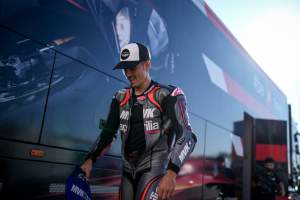 Dixon and Crutchlow aren’t the only British riders who will find themselves in new seats for Aragon, though, with Moto3 rider John McPhee also getting the chance to step up a class as he inherits Dixon’s Moto2 machine.

Denied the chance to ride full-time in the class in 2021 by contractual wranglings within the Petronas team, it means that the Scottish racer finally gets the chance to make an anticipated debut in the middleweight class.

Struggling with horrendous luck in Moto3 this year and out of championship contention, his natural riding style is more akin to that needed to pilot the Triumph triple engine powered Moto2 bikes, and it could well make for an interesting weekend for McPhee as he attempts to secure a full-time promotion for 2022.