Jun 11 2020
By Simon Patterson
No Comments
Share this article

An updated 2020 MotoGP calendar has been released by organisers, as the series looks to finally go racing after a four-month absence thanks to coronavirus.

Mirroring the proposed calendar published last week by The Race, it features a July 19 season opener with the first of a series of double-header races.

However, while plans are becoming more solid on how the 2020 season will look, there still remain a number of questions to be answered before we know how the year will play out.

The season will start at Jerez with the Spanish Grand Prix, with the championship remaining in place in the southern city for another race the following weekend at the same track. After one weekend off, a race at Brno in the Czech Republic kicks off a central European leg that concludes with a double-header at Austria’s Red Bull Ring.

The season then enters grand prix racing’s most intense period ever, with a two-weekend break before eight races in 10 weeks. Largely taking place in Spain, the bloc starts with a double-header at Misano in Italy, a race in Barcelona and one in Le Mans, and four races in five weeks at Motorland Aragon and Valencia. 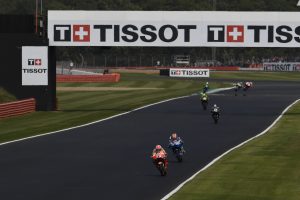 Does MotoGP have a future at luckless Silverstone?
Read more

The calendar plan has already drawn some criticism during the draft stages about the number of races in Spain, but it nonetheless means that the championship will be able to run at least 13 European races with the bare minimum of travelling, as restrictions remain in place across much of the continent.

Whether the series will venture outside of Europe is still to be decided. Confirming in the announcement that the season will conclude no later than December 17 and have no more than 17 events (with the Qatar round already held for Moto2 and Moto3 making it 14 confirmed so far), the organisers have left the door open for a series of overseas races.

The USA, Argentina, Thailand and Malaysia, all already postponed this year, have been included on the provisional calendar with no set dates. Their status is due to be confirmed one way or another by July 31, and it’s believed that their admission onto the schedule depends on local restrictions on allowing crowd attendance.

Dorna has also been unable to confirm at this time which races in Europe members of the public will be allowed to attend, stating: “All dates, events and the eventual attendance of spectators are subject to the evolution of the pandemic and the approval of the corresponding Governments and authorities.”