Last Sunday’s Moto3 race at the Catalan Grand Prix was perhaps one of the most terrifying things I’ve ever watched.

With the bikes closely matched as always and with the start/finish straight creating a long slipstream drag to the line, the action in the final few laps moved beyond terrifying and into the category of horrifying.

Part of the problem is the incredible parity between machines that allows huge group races. So well balanced are the Hondas and the KTMs (and their rebadged Husqvarna and Gas Gas machines) that it’s almost impossible for anyone to break away, meaning that it’s now very rare that we don’t get big group battles. 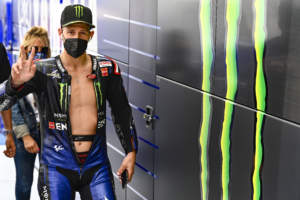 But what made Sunday’s action even more scary than usual was undoubtedly the actions of the riders themselves. From weaving around on the main straight trying to break the tow to rolling off the throttle mid-corner to ensure they didn’t lead onto the straight, there was a litany of incidents that should have been sanctioned right away (but weren’t).

Instead, the race stewards called the entire grid into a meeting directly after the race to tell them off like naughty children – an exercise in futility if there was ever one. Racers are going to race, and unless dangerous actions are clamped down on with severe punishments, a telling off does nothing but waste time and oxygen.

It seems absolutely crazy to be talking about this in the aftermath of what happened only a week earlier, too, when 19-year-old Jason Dupasqiuer tragically lost his life during Moto3 qualifying at Mugello.

Struck by other riders after a relatively innocuous fall, his crash bore stark similarities to the ones that cost both Marco Simoncelli and Shoya Tomizawa their lives. Unfortunately, the commonality in all three is obvious – you can (and series organiser Dorna continues) to make tracks as safe as possible, but there is one type of crash you can never fully protect riders from as long as you’ve got close racing.

However, there perhaps is one action that can be taken that would make Moto3 substantially safer than it currently is, and which would also in turn largely solve the drama that is qualifying in the lightweight class.

That’s important because while races have become increasingly dangerous for Moto3, it’s really the two 15-minute sessions on Saturday that take the biscuit. Riders touring on the racing line in large packs, antics in pitlane as they refuse to lead out each other, and generally dangerous riding have made it stupid almost to the point of insanity, with some sessions last year featuring literally every rider on the grid change position due to penalties in the aftermath.

The solution, I’ll admit, isn’t my own, but one pitched to me after Sunday’s race by one of the more experienced riders on the grid. It’s not an easy one to implement, it needs substantial manufacturer buy-in, and it won’t happen overnight – but it does present a particularly attractive solution to the problem.

His theory, quite simply, is that to make Moto3 safer, it needs to become faster. If you were to say add 150ccs to the capacity limit, taking the bikes from 250 to 400, it would bring just enough extra horsepower to allow riders to set lap times alone without a tow and to lead onto the straights knowing they’re likely to lose one or two positions instead of five or 10.

It’s not without precedent, either – it’s the exact same action taken by MotoGP back in 2012. Originally powered by 990cc engines after the switch from two-stroke to four, capacity was reduced to 800cc in 2007 in an attempt to reduce speed and make the bikes safer, as the new four-strokes started to outgrow some of the traditional venues.

However, the unexpected aftermath of the move was a switch from torquey bikes that tore up tyres to highly-strung revvers with much less punch out of corners. The impact was almost instantaneous – riders had to carry more corner speed to make them go faster, and low-side crashes on braking were replaced by monster mid-corner high-sides. By 2012, we were back to 1000cc bikes and the problem solved itself.

Moto2 has also had its own capacity shift of late as well, let’s not forget, as it moved from Honda’s four-cylinder 600cc engine to 765cc triple Triumphs. While not producing substantially more power thanks to having one cylinder fewer, there was nonetheless an increase in power and a move towards torque and acceleration. 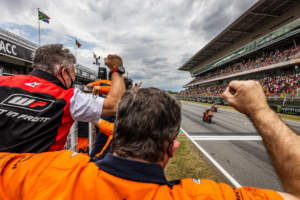 Reworking the Moto3 rules would take substantial manufacturer buy-in – but with Honda and KTM the only two brands in the class, it’s a lot easier than, say, starting to alter the MotoGP rulebook. It would also serve to bring them more into line with what sells on the road right now – KTM’s street bike range includes 125cc and 390cc sports bikes, but nothing in the 250cc range.

That doesn’t mean it would be an easy sell, though – because the fact remains that while Moto3 is becoming increasingly scary to watch, it is also thrilling. You risk upsetting that balance and, woe betide, ending up like Moto2 – hardly the most enthralling entertainment most weekends.

It’s not an easy job, but it is, unfortunately, one that is looking more and more necessary. Sunday’s race at Montmelo was marked by not one but two other close escapes from very similar crashes to Dupasquier’s, and that makes me worry that it’s only a matter of time before something very bad indeed happens again.