Morbidelli ruled out of Assen MotoGP after training incident

The Race first reported earlier this evening that Morbidelli was in doubt for the event due to the training incident, and the team has now confirmed that he will not be fit to race.

The Italian rider first injured his knee way back in 2015, and has been quietly struggling with the problem since then.

Jun 21 : Magic from Marquez and misery for Vinales in German GP

The issue came to a head at this year’s French Grand Prix a month ago, when he fell in pitlane while practising a flag-to-flag bike swap and landed awkwardly on the joint.

“When I broke my leg in 2015, I kind of twisted the ligament,” he explained at the time. “It crossed over, on the left knee.

“This winter during training I hurt my meniscus a little, but I didn’t give it much importance while I was recovering, but the week before Le Mans I didn’t fall but I put down my foot in a bad way, and it disturbed my knee again.” 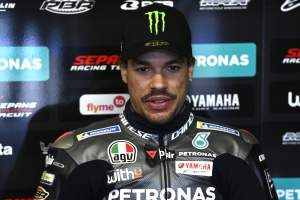 Morbidelli has been working extensively with a physiotherapist since then in an attempt to strengthen the joint.

The Race’s sources say that he has once again injured it while training today at home, after travelling back to Tavullia between last weekend’s German Grand Prix and the upcoming race at Assen.

He is already set to have surgery to repair the initial damage from 2015, as he explained last month, and it remains to be seen whether he will now attempt to use the five-week break in the MotoGP calendar created by the cancellation of the Finnish Grand Prix to have the necessary operation.

“I will have to make a choice that, more than the sport, looks at the life I will live,” he said when asked recently about the prospect of future surgery.

“If I want to be completely in order, I will have to operate, otherwise I will still be able to continue calmly but with a little more fear.”

If Morbidelli isn’t fit to ride, it seems he won’t be replaced for this weekend’s race despite Yamaha having test rider Cal Crutchlow on its books.

Yamaha is not keen to field Crutchlow on Morbidelli’s old 2019-spec machine.

Valentino Rossi would therefore represent Petronas solo in the Netherlands.