Quartararo went down while running ninth on the opening lap in what was a bizarre double crash at Turn 8. Right ahead of him, Aleix Espargaro had went in on Quartararo’s team-mate Franco Morbidelli, but ran wide and fell, with Quartararo then also immediately hitting the deck despite there being no contact between the two.

Having remounted and finished 14th, Quartararo remains Mir’s closest rival in the standings but is 37 points down with 50 available in the final two races of the campaign. 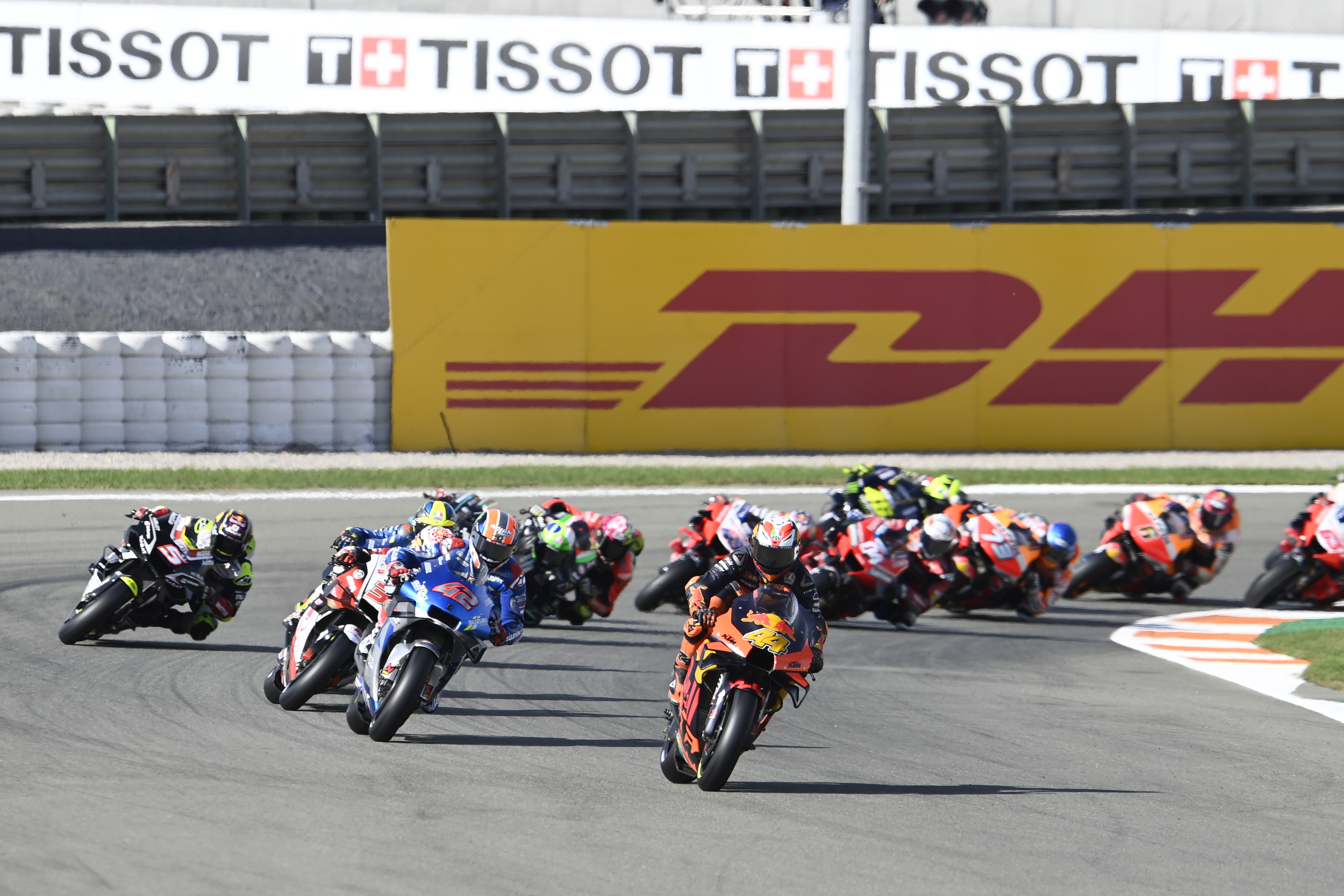 Poleman Pol Espargaro fought off the Suzuki of Alex Rins at the start of the race, but only led for one lap and a bit before Rins launched his Suzuki down the inside of Espargaro’s KTM at the sweeping Turn 11 right-hander.

Mir, who had moved up a place at the start at Johann Zarco’s expense and then dispatched Takaaki Nakagami during the opening lap, spent the next two laps trying to emulate his team-mate in passing Espargaro, before pulling off a carbon copy move at Turn 11 on the fourth lap.

The two Suzukis then put half a second between themselves and the KTM, with the gap remaining relatively steady from that point on for much of the 27-lap race.

But just as Espargaro seemed to draw closer to Mir just past the halfway point, Mir swept past his team-mate at Turn 11 after Rins ran prior exiting the prior corner and struggled to get his GSX-RR tipped in for the right-hander.

Once in clean air, Mir soon began to break away from the other Suzuki, establishing a lead of over a second before easing up on the final lap to win by 0.651s. 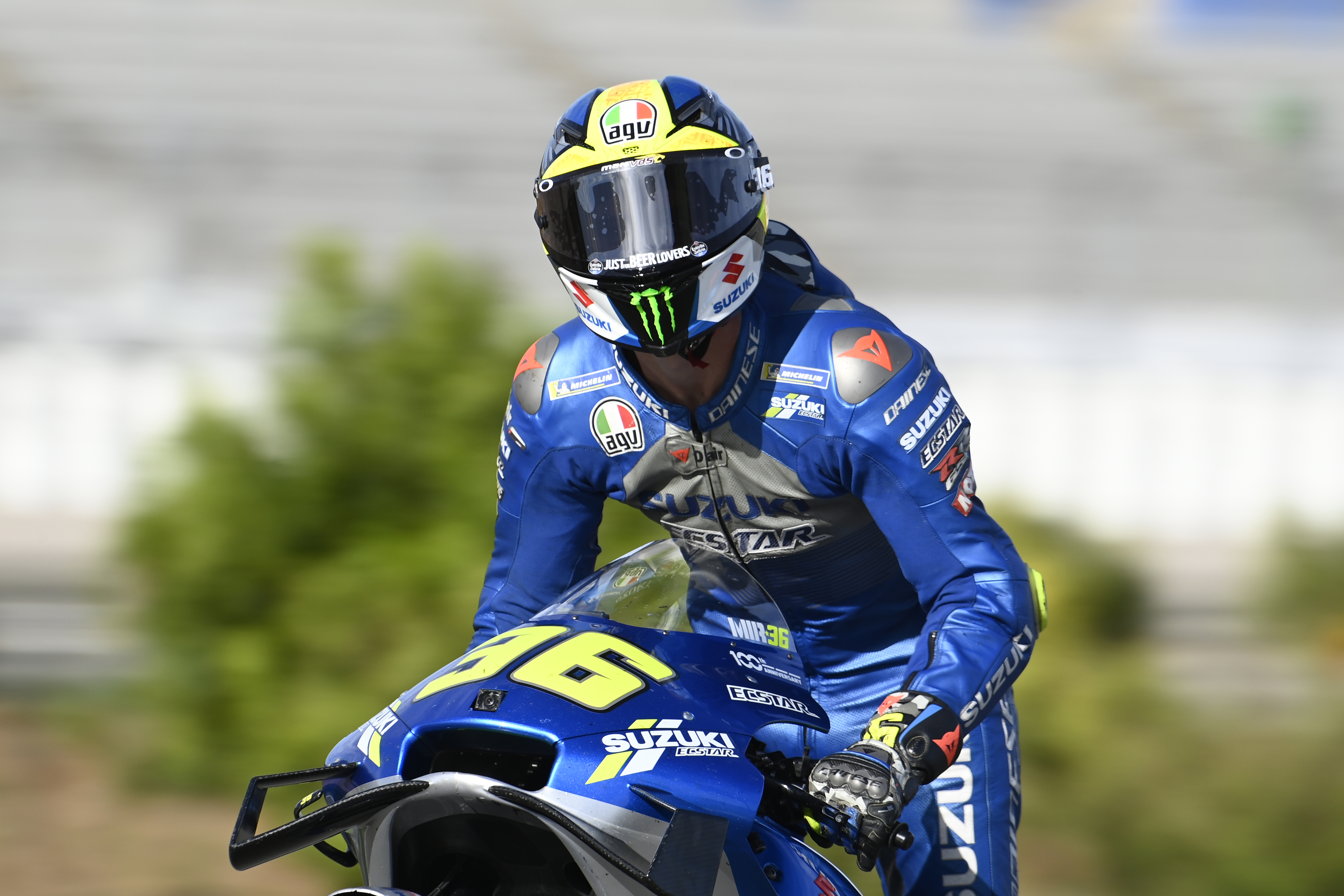 Espargaro looked close to challenging Rins late on but settled for third place, bagging a fourth podium in his farewell campaign with KTM. Rins’ second place means he has drawn level on points with Quartararo.

LCR rider Nakagami was the only Honda in the top 10 as he scored fourth place, having passed the Tech3-run KTM of Miguel Oliveira on lap 15.

Oliveira didn’t have the pace to stay with Nakagami and nearly fell int the clutches of Pramac Ducati’s Jack Miller, but held on to fifth place.

KTM works rider Brad Binder made it three KTMs in the top seven despite having had to serve a long-lap penalty for wiping out Miller in the previous race. Binder outfoxed Andrea Dovizioso late on, as both benefitted from Avintia Ducati rider Zarco fading badly – the Frenchman having spent most of the race in sixth.

Dovizioso is 45 points behind Mir and is the final of the six riders who still remain in the championship contention. His works team-mate Danilo Petrucci completed the top 10 on the day, overtaking Franco Morbidelli (Petronas Yamaha) – who struggled badly as the sole rider to choose the hard rear tyre, and is now also 45 points behind Mir.

Maverick Vinales started from the pitlane after exceeding his engine allocation for the year and benefitted from attrition to finish 13th. He is now fourth in the standings, 41 points down on Mir.

There were several crashes in the race beyond Quartararo and Aleix Espargaro. Cal Crutchlow (LCR Honda) and Francesco Bagnaia (Pramac Ducati) both fell on the sixth lap, while Aprilia debutant Lorenzo Savadori spent most of the race a lap down after crashing and finally retired in the pits.

Alex Marquez (Honda) crashed out of the top 10 right after being passed by Andrea Dovizioso on the main straight.

The returning Valentino Rossi (Yamaha) retired after four laps as his bike cut out due to what has been reported as a potential fuel pump failure, while Tito Rabat (Avintia Ducati) – who will leave MotoGP at the end of the season – pulled into the pits with an unspecified issue.