When the news landed halfway through MotoGP free practice four at the Styrian Grand Prix that Moto2 star Raul Fernandez would graduate to the premier class with Tech3 KTM for 2022, it seemed like peculiar timing.

That became even more apparent as it seemed like key people hadn’t been briefed on the announcement, including, remarkably, Fernandez himself. 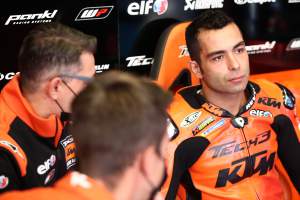 That’s because the last-minute decision to release the news in the middle of a practice session seems to have been the result of the sort of internal plotting that would have left Niccolo Machiavelli proud.

An amazing story has now emerged of how three grand prix riders and two manufacturers have been left with a bitter taste in their mouths on what should have been a celebratory day.

It’s been an open secret within the MotoGP paddock for weeks that Yamaha has been on the hunt for Moto2 rookie sensation Fernandez’s signature for next season, as it looks to fill not one but two seats at satellite team Petronas SRT.

With Valentino Rossi’s now-confirmed retirement and the promotion of Franco Morbidelli to the factory team to replace Maverick Vinales (news expected to be made official any day now), there are two prime seats to fill – and with Yamaha keen to secure one of the sport’s hottest young talents, it’s aggressively courted Fernandez.

That’s no secret, either, with KTM motorsport director Pit Beirer telling The Race earlier this season that he knew there was interest from other parties.

“I know of course that some other people in the paddock are interested in him,” said the former motocross racer, “but all I can say is that we have a three-year contract with him.

“First of all, I hope they respect the contract, and then secondly I hope that he’s had a good time with KTM so far and wants to create a future with us because we definitely want to do it from our side.”

It’s believed that Fernandez’s contract stated that in order to extricate him from his future with KTM, any interested party would have stump up a cool €500,000 to buy him out of his deal. 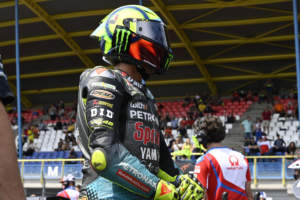 It seems like that agreement was finally met this weekend between Yamaha boss Lin Jarvis and Fernandez’s manager Hannes Kinigadner (the son of double motocross world champion and KTM legend Heinz), with Yamaha agreeing to make a significant investment for its future rider strategy by buying the 20-year-old Spaniard out of his KTM contract.

But when Kinigadner went to KTM to deliver the news, the story then took an unexpected twist according to The Race’s sources in the paddock.

KTM not only refused Yamaha’s offer – as was its contractual right even though the €500,000 price had been met – but also informed Kinigadner that it would be holding him and his rider to the contract that they had signed.

Pre-empting any further eleventh-hour efforts by Yamaha to break KTM’s existing deal with Fernandez, it then announced the news that he would move to MotoGP with Tech3 halfway through a practice session at its home race rather than, as planned, in an event at its Mattighofen headquarters on Monday.

“I feel sorry to have to do it this way, at this time of the weekend. Danilo and Iker are right now going to do their qualifying session. For sure there was a better moment” :: Herve Poncharal

That means that, incredibly, it seems KTM announced the news of Fernandez’s move to MotoGP without informing either him or current Tech3 riders Iker Lecuona and Danilo Petrucci – both of whom will now, with Fernandez’s Moto2 team-mate Remy Gardner having already been announced as a 2022 Tech3 rider too, lose their jobs next year.

It also explains the somewhat frustrated tone taken by Tech3 team manager Herve Poncharal when he was interviewed live on air only moments after the news broke.

The veteran French team boss confirmed that the timetable was massively advanced in the face of Yamaha’s pressure.

“You know me, I always say what I am feeling and what I am thinking,” Poncharal told MotoGP pitlane reporter Simon Crafar, “and there’s not too much filter between my heart and my mouth.

“Clearly as you can imagine this is a weird moment to announce such big, great and positive news through FP4, when we are here [at the Red Bull Ring] for two weeks.

“The plan was to finally sit down on Sunday and decide, and to inform our riders what would be the situation for 2022.

“But you can imagine that we’re back from a long summer break, a few teams do not have riders, and although some decisions and signatures have already been done, people are still pushing, pushing, pushing.

“It’s not the ideal situation. I feel sorry to have to do it this way, at this time of the weekend.

“Remember that Danilo and Iker are right now going to do their qualifying session and for sure there was a better moment.”

The resulting mess that the political manoeuvring has created seems to have left no one at all happy.

Petrucci was left fuming and Lecuona reportedly in tears, after both were called into KTM’s offices, still in their leathers after qualifying, and officially informed of the news.

Yamaha has been once again left looking elsewhere for someone to fill both its seats at Petronas Yamaha, with no name even close in stature to Fernandez left available.

And, perhaps, most worryingly for KTM, it seems to have secured the services of a rider who seems noncommittal at best about wanting to race for it in 2022.

When asked by Spanish TV after the news was announced whether he will be riding ‘where he wants to be’ next season, Fernandez’s answer was simple.