‘Just a game’ – Rossi and Morbidelli’s plan to avoid conflict

“He yells a lot. He talks very loud, Vale talks really loud, it makes me laugh. I enjoy to listen to his voice, not just in the pitbox, but also in the office.”

Don’t take it as a complaint. Franco Morbidelli couldn’t sound more overjoyed to be sharing the Petronas SRT Yamaha garage with Valentino Rossi, and not just because Rossi is a living legend.

Rossi has had a famously difficult history with his MotoGP team-mates, but Morbidelli isn’t just any team-mate – he’s also one of the nine-time world champion’s best friends.

Morbidelli is literally reason why the VR46 Academy exists – Rossi having formalised his young-rider training set-up after taking Morbidelli under his wing. Their careers have been intertwined since the former first joined the Moto2 world championship in 2013.

But that, of course, is no guarantee of harmony. As Morbidelli readily acknowledges, he wouldn’t be happy losing to Rossi: “Still I will try to be better, you know what I mean? I hope that it goes well [for him] – but maybe not as well as for me.”

The old adage about how your team-mate is the first person you have to beat rings true even among friends, and though the team seems to expect more from Morbidelli than from Rossi initially in 2021 (at least going by their respective ends to 2020), if they’re suddenly fighting for the same bits of silverware there’s always potential for conflict.

But Morbidelli has always been adamant that things will remain cordial within the satellite camp when the championship gets underway.

“He’s a big friend of mine, and his figure is maybe even bigger than a friend, but I want to be fair, just and right towards him in every aspect of life.

“Of course, we are fighting for something big, but we have to remember that nothing is as big as friendship and love.

“But I hope that we’re fighting for top spots and important results.”

And on the other side of the garage, his friend, mentor, and technically his boss (Morbidelli is represented by VR46 managing director Gianluca Falcioni) is in complete agreement.

“The real friendship between people is very important,” insisted the friends-and-family-orientated Rossi.

“It’s something that’s always been very important for me in my life. I’ve always spent time and energy to have good friends around me. If you need to have real friends, you have to work a little bit at it – it’s not easy.

“I’m very good friends with Franco for a long time, and we’ve worked together to bring him to MotoGP. I’m very happy to be his team-mate because it’s an interesting situation that no one expected – neither him nor me.

“For sure it’ll be hard to manage when we fight, because your team-mate is your first rival, but to fight and to continue to be friends you need to have a real relationship.

“I hope that we can both be competitive and try to win races.”

There’s more to their professional relationship in 2021 than just their friendship and their rivalry, with a real chance for the master to become the apprentice as Rossi sets out to find some of the form that he’s lost in recent years by mimicking Morbidelli’s 2020 results.

Guided in large part by veteran crew chief Ramon Forcada in setting up his year-old Yamaha M1 the way that they wanted with minimal input from factory engineers, Morbidelli arrived upon a recipe for success, ending the year with three wins and second overall.

And people within the team have hinted that Forcada is prepared to share some of that love across the garage with Rossi and his relatively inexperienced crew chief David Munoz, who is only in his second season in MotoGP. 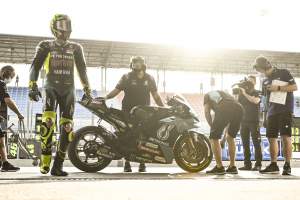 Out of the darkness: MotoGP has the real Rossi back for 2021
Read more

Whether that’s already been happening in pre-season testing is hard to gauge, but Rossi did end the test the happiest he’s been in a while and seemingly ready to turn a corner from what was a disappointing end to his factory Yamaha tenure.

And with Morbidelli having had a good test, too, there should be little trouble maintaining a positive initial atmosphere.

“I’ve known them since I was a little kid, so I just enjoyed spending time with them a lot.

“Of course we are opponents, so when we are doing our job we do our job, but then it’s just one more day and more time with your friends, with some friends that make you feel good.”