Is this 16-year-old the future of MotoGP? - The Race
Skip to content
MotoGP

Is this 16-year-old the future of MotoGP?

Moto3 rookie sensation Pedro Acosta made a hell of an impression at the Doha Grand Prix.

The 16-year-old Spaniard didn’t just take victory in only his second ever grand prix but won the Moto3 race in an incredible manner – coming through from the pitlane after being penalised during practice.

Taking a win so early in his career and in such spectacular style has obviously put serious pressure on the Ajo KTM rider for the remainder of the season. And for the future too, as people line up to tip him as a nailed-on world champion.

But is that a theory supported by evidence, or is it a case of some getting excited a little too soon?

The precedents are a mixed bag, and it’s entirely possible that this is the start of something extraordinary for Acosta – or a complete one-off.

Since the move from the two-stroke 125cc championship to the four-stroke Moto3 series in 2012, there have only been four rookie race winners.

The first of those was wet weather specialist Khairul Idham Pawi, who like Acosta took victory in only his second race as a full-time rider at the 2016 Argentine Grand Prix.

He even managed to repeat it later in the same season, doubling up with another win in equally tricky conditions at the Sachsenring.

However, those two wins stand out as the highpoint not only of the Malaysian’s 2016 season but of his entire grand prix career, with his next best finish of eighth in five seasons highlighting how he was able to perform in the rain but only in the rain.

That s something you can also say about Turkish rider Can Oncu, who came to Moto3 for the final round of 2018 as a reward for winning the Red Bull Rookies Cup.

Riding in treacherous conditions at Valencia in his first-ever grand prix, he became the youngest ever race winner at only 15 years and 115 days old.

That was enough to secure him a full-time ride with the same Ajo team that Acosta now rides for 2019 – but the season was a complete disaster, ending in a best result of 12th, 32nd in the championship and a demotion to World Supersport for 2020.

In 2019 another Moto3 rookie took their first victory at Valencia, as Spaniard Sergio Garcia won the final round from Andrea Migno and rookie wildcard Xavier Artigas.

Though he built on it with a strong 2020 season that earned him ninth in the championship and kicking off 2021 well with fourth at the opening race, it’s still too early to predict what the future holds for the 18-year-old. It doesn’t seem he’s quite set for the heights of future MotoGP world champion on the overall evidence so far.

However, the fourth rider to win a Moto3 race in his rookie year did exactly that in 2020, with reigning MotoGP champion Joan Mir a victor at the 2016 Austrian GP.

He won the series the following year and kickstarted his path to a factory Suzuki and the big prize last year with the result.

But there’s perhaps a better metric to gauge Moto3 talent by than just their first-season wins because when you look at the names at the sharp end of the 2021 MotoGP grid, there’s a common thread that runs among them: general success in their rookie years. It’s not about one-off hero rides, but consistent demonstrations of talent.

Mir’s win in Austria in 2016 was backed up by podiums at Misano and Valencia, enough to give him fifth in the Moto3 championship. His current Suzuki team-mate Alex Rins also had a strong debut Moto3 season in 2012, taking a podium in his fourth race and finishing the season fifth.

The same applies at Yamaha. Fabio Quartararo was twice a podium finisher at Acosta’s age in his Moto3 rookie season until injury derailed his year (and nearly his whole career), while Maverick Vinales, a winner in his fourth ever race in the 125cc class, went on to three more wins that year and third overall. Third the following year, the first of Moto3, he won the title in 2014 and set out on his own path for a factory MotoGP seat.

More than any statistic, there’s something far more telling about Acosta’s chances for the future: his character and his personality.

Supreme talent is a given to be MotoGP champion, but in a paddock full of talent there s more than just raw speed needed to make it to the top. 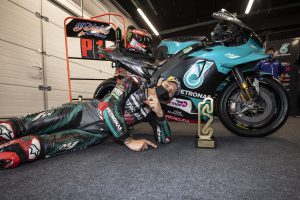 What must Quartararo do to become France’s hero?
Read more

It’s obviously hard to judge too much about the kid just yet given his limited time in the paddock, but those who’ve worked with him say he s intelligent and calm, already has a good grasp of English, and is something of an old head on young shoulders.

He’s also in the perfect pipeline for grand prix success, if he wants it, with KTM and sponsor Red Bull happily demonstrating how keen they are to handpick talent out of the Rookies Cup and fast track them onto MotoGP machinery – especially now that they have a bike capable of winning.

MotoGP remains at its heart a meritocracy and should Alcosta continue to demonstrate the same sort of talent as he showed in Qatar, he’s got future MotoGP contender written all over him.

But one blistering ride through the field doesn’t guarantee he’ll be the next Mir.