Instinct vs herd mentality – How a crazy MotoGP race was won

There are often days in MotoGP that can be described as chaotic. Regularly, words like manic or frenetic apply to races.

But after one of the craziest races ever imaginable, there’s going to have to be some new terms added to Grand Prix racing’s lexicon to cover Sunday’s Austrian Grand Prix, and the absolute insanity that came along with the rain that hit with only seven laps to go.

The race at the Red Bull Ring had already started under something of a cloud, both literally and figuratively, with the threat of rain looming and with the white flags issued on the opening lap to signal that pitlane was open for a switch to a wet bike as soon as any rider saw fit. 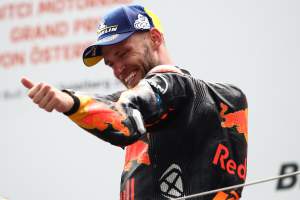 The rain flags even came out briefly in the opening lap – but with nothing more than a few drops falling, we looked like we had avoided the threat of a typically Austrian downpour.

“From the start it was already raining a little,” said early leader Pecco Bagnaia, “and in this condition it’s not easy to set the pace.

“But I was trying every lap to push a bit more and a bit more.”

And the early worries about the conditions didn’t take anything away from what quickly looked set to become a classic race, with Bagnaia, Marc Marquez and Fabio Quartararo building a buffer at the front of the field before getting absolutely stuck into the battle for the win.

The trio properly went to war together, with some of the most aggressive racing that we’ve seen from Marquez since his return from injury – and the trio looked absolutely untouchable at the front until the rain made a sudden reappearance.

“I overtook Quartararo and then I said ‘OK, I will try to catch Pecco in this lap’ and in one lap, I caught him,” said Marquez of his charge approaching the final laps of the race.

“So then I started to realise that this was a good performance and that was a great surprise from the bike.

“But then unfortunately the rain arrived, and everything changed.”

The sudden rainfall prompted immediate action from some of the MotoGP field, with Ducati rider Jack Miller the first to dive into the pits, closely followed by Suzuki’s Alex Rins. They’d been running ninth and 10th, Miller having just lost ground after tagging along with the lead group for the first part of the race.

“The only thing I could do to take the power back into my hands was to try a hail Mary” :: Jack Miller

But Miller admitted afterwards that he went too early as he rolled the dice in the bad situation he had found himself in.

“It wasn’t planned at all,” Miller admitted. “I was in a bad, bad way on track.

“I was getting passed left, right and centre and I had no grip. The only thing I could do to take the power back into my hands was to try a hail Mary.

“I exited Turn 3, I looked over, and it was grey at the airport, right next to the circuit.

“What I’ve seen prior is that when the rain comes down here, it comes hard and quick.

“If it hit while I was on an out-lap while the others were still on slicks, they’d be wobbling around and I could make up a bit of time. But I was a lap early.”

As he rejoined well down the field, it was chaos at the front while Miller was in the pits. The leading group of three soon became a group of six, as Quartararo, Bagnaia and Marquez were joined by Jorge Martin, Joan Mir and Brad Binder.

However, no one wanted to make the first move towards pitlane even as Miller and Rins rejoined on wet tyres – until, as reigning world champion Mir admitted, herd mentality took over when the group approached the entrance to pitlane at the end of lap 24 of 28.

The leaders flood into the pits but @BradBinder_41 stays out to lead! 😲#AustrianGP 🇦🇹 pic.twitter.com/ZqIBqCh6TR

“Honestly inside my mind I was thinking about staying out because there were only four laps to go,” said Mir.

“But on the other hand, I was there in the group, and I saw that all my direct rivals were going in, so I decided to go in too, and it was an easy choice to make.

“In one moment, I asked myself what we were doing with only four laps to go, but there was probably the same option to win if we had all stayed on track or if we stopped in the pits to change tyres.”

“As I saw the others ducking into pitlane, I just decided to shoot forward and keep going” :: Brad Binder

One of their number decided to roll his dice in a different direction, though.

With no horse in the championship race, KTM rider Binder opted for a different option, committing to staying on track on slick tyres to see what happened – a decision that he admitted was all instinct.

“When I saw everyone going into the pits, I knew it was my chance to take a gamble,” he said when asked by The Race about his thought process in the post-race press conference.

“As I saw the others ducking into pitlane, I just decided to shoot forward and keep going, and for half a lap it was a really good decision because I could still ride really fast in the first two sectors.”

Immediately pulling clear, he was one of a small band of nine riders who elected to stay out, and before too long he had pulled out a comfortable 10-second lead over two riders who would’ve completed a brilliantly unexpected podium: Aleix Espargaro and Valentino Rossi.

The Aprilia rider admitting that it was more than a little bit sketchy on track.

“When it started to rain I took the gamble,” said Espargaro, “even those I hate those conditions, I hate to ride in the wet on slicks.

“I’m the person in the world who hates it the most, but today I felt like I could take the risk.

“I made a mistake on the last lap though, I braked in the middle of the straight and both tyres locked.

“I tried everything but it wasn’t enough – I had bad luck for just one minute!”

In fact, he wasn’t the only one, as a late charge was underway from some of the original leading bunch, now headed by Bagnaia, Martin and Marquez – although their group soon lost one of its number as the Honda rider fell.

“I saw a lot of riders coming past me on slicks and I wasn’t sure if it was the right choice,” said Bagnaia, “and after we pitted the first two laps were even more slippery than on the slicks in the braking area.

“But it was the same for all the riders and Marc crashed.

“I just tried to warm the tyres, and I think I overtook nine riders in the last laps.

“I was enjoying it a lot, but Brad was already gone.”

Indeed, Binder might have already been gone, but it was far from plain sailing out front for the South African on slick tyres. Binder would have been grateful for problems as minor as Bagnaia’s need to get some temperature into his wet tyres!

“I came across the line at the start of the last lap and I saw plus nine [seconds] on my board,” said Binder.

“When the tyres were hot and the brakes were hot, it was OK. You could manage it and it was OK.

“But as soon as they cooled off, man it was a long two laps!

“I was waiting for someone to come flying past me, and the feeling when I saw the flag was just pure relief – although I couldn’t believe that we had won either!”