Franco Morbidelli has admitted that he’s likely to be unable to live a normal life until he has surgery to repair the damaged knee that caused him to fall over in pit lane at the French Grand Prix.

And Morbidelli says he most likely won’t be able to have the operation he needs right away, thanks to the pressures of the MotoGP calendar.

Morbidelli fell after jumping from one bike to another during a practice flag-to-flag bike swap at Le Mans, with his Petronas Yamaha machine falling as well as he was unable to hold on to it.

Speaking afterwards, he revealed that the cause of the unusual crash was an already-weak knee that folded under him suddenly, and briefly explained that an injury sustained during training prior to the race was to blame.

Ahead of his home race at Mugello, Morbidelli detailed the whole story, explaining that the injury instead dates all the way back to 2015 when he broke his leg while training on a motocross bike – shortly after his debut grand prix podium in the Moto2 class.

“When I broke my leg in 2015,” he explained, “I kind of twisted the ligament. It crossed over, on the left knee.

“This winter during training I hurt my meniscus a little, but I didn’t give it much importance while I was recovering, but the week before Le Mans I didn’t fall but I put down my foot in a bad way, and it disturbed my knee again.” 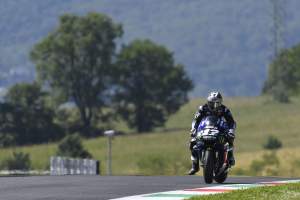 “I will have to make a choice that, more than the sport, looks at the life I will live,” he said when asked about the prospect of future surgery.

“If I want to be completely in order, I will have to operate, otherwise I will still be able to continue calmly but with a little more fear.”

That’s likely because any knee surgery can require a substantial recovery period, with up to six months of immobility regularly required following repair work on delicate ligaments and tendons.

The shorter-term consequences are less major for Morbidelli, though, and he’s confident still be able to do a good job this weekend.

“We’ve tried to find the right balance between physio and working out, because I didn’t want to lose any of my physical form but at the same time I needed to recover from the injury.

“It was a hell of a job but I think we managed to do it well.”

However, the Italian also conceded that he wasn’t too focused specifically on Mugello despite the iconic venue being absent from last year’s calendar, after initially forgetting about it and being unable to commission veteran designer Aldo Drudi to produce a special helmet for the event.

“I’m really sorry, and I have to be sincere on this matter,” he admitted to the media. “I completely forgot about making the design. I completely forgot Mugello was after Le Mans. I live day to day quite a lot, and I don’t look at the calendar too many times.

May 25 : Is it time for Valentino Rossi to retire from MotoGP?

“I forgot there was Mugello after Le Mans and when Aldo called me to ask about it I told him I forgot and I didn’t want to start to make one [a special helmet design] in a rush. Making a livery for your home race should be a nice and easy thing and not a heavy, stressful job, especially over the job of recovering the knee.

“I’ll try to make up for it before Misano, and I hope that my friends will try and remind me a little earlier that we’re racing in Misano!”