KTM wildcard rider Dani Pedrosa has admitted that he was lucky to walk away from his MotoGP comeback race unhurt, after a relatively innocuous crash in the opening laps of the Styrian Grand Prix triggered a horrific fireball.

The incident left Aprilia racer Lorenzo Savadori with a broken ankle that will require surgery. 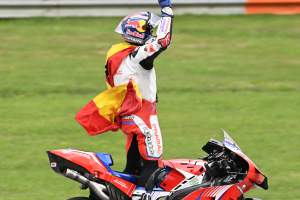 Pedrosa, who qualified in 14th for his first start since retiring from MotoGP at the end of 2018 and his first race appearance in the series for any team other than Repsol Honda, made a strong start at the Red Bull Ring and even looked set to end the day as KTM’s top rider at its home race.

However, running in cooler conditions than practice and after heavy rain this morning left the track with plenty of damp patches off line, Pedrosa made a relatively uncharacteristic error at the notorious Turn 3.

He fell at one of the slowest corners on the MotoGP calendar and was left stranded alongside his bike in the middle of the track.

Left with no option but to hit either Pedrosa or his KTM RC16, Savadori hit Pedrosa’s bike.

The fuel tank split and caused a major fire across the Austrian circuit, prompting a red flag.

Seeing the inferno up close and knowing how close he came to serious injury, Pedrosa admitted afterwards that he was lucky to have escaped the crash.

“It was a rough start, in the first race,” he said. “I don’t know why I had this crash.

“It was the third lap and maybe I touched the inside line, or maybe the tyre was still too cold on the right side because I was using the hard compound on the front in the colder conditions today.

“I don’t know why, but I went into the turn and when I was at maximum angle I just tried to pick up the bike, it didn’t pick up, and I stayed on the floor.

“I spun in the middle of the track, and unfortunately Savadori hit my bike and he got hurt. I’m sorry for him.

“I was very lucky. I don’t think I’ve had this situation before in my career, and it was a little bit of a shock to see all the bikes passing by, but fortunately it was all good for me.”

Thankfully escaping unscathed, he was eligible to restart the race on his spare bike thanks to MotoGP’s rules stating that any race red flagged in the opening three laps is declared a full restart and not a resumption of the previous one.

However, with his concentration broken by the near miss, Pedrosa admitted he was distracted as they headed out again – and that along with the continuing difficult track conditions meant he wasn’t able to perform as well as he had hoped to.

“In the first start I was very focused, but in the second one, changing the bike from wet to dry, because it was ready for the wet, we had some issues,” he said.

“One bike was always working better, but I had to take the spare bike.

“I said to myself ‘OK, I’ll go to the race but I’ll take it easy in the beginning and then see how it goes.’ So I imagine I wasn’t really focused or concentrated at the very beginning.

“When I went to the grid, I even forgot to put on the start device.

“I didn’t start well and in the first couple of laps I lost positions.

“I wasn’t too concerned about it at that moment – I just wanted to go.

“Then in the middle of the race I got some pace and I was stable with that pace, although the tyres were really not having any good feeling.

“Comparing practice to the race with the tyres it was a difficult thing, and it was easy to crash.

“I just kept my pace and I battled with a few riders. One crash here, one penalty there, one mistake there and I recovered some positions.”

Coming home a strong 10th and second KTM only to an impressive ride from full-time team-mate Brad Binder in fourth meant it was a job well done for Pedrosa, who hinted that we’ll see him return to action later this year at Misano as he continues to develop KTM’s 2022 machine.

“I enjoyed it, I had fun all weekend, and I’m super satisfied with how it went all weekend,” enthused Pedrosa, who has been notoriously reluctant to make a wildcard appearance for KTM until now.

“I even think that it might click a little here and there, if I had gone a little faster in FP3 to go directly to Q2, to be one or two rows more in front.

“That would have changed the whole picture and it could have been even better – but no complaining!

“I don’t think we can make anything better from here to the next wildcard date that we have.

“It’s interesting to see things and to change them, but I don’t think we have time to make anything different, but I’m happy and satisfied.”