Has Pol Espargaro made a huge mistake? - The Race
Skip to content
MotoGP

Has Pol Espargaro made a huge mistake?

It’s hard not to feel sorry this week for Pol Espargaro. The passionate and fiery Spaniard has poured four years of his heart and soul into KTM’s MotoGP project and looked set to finally fight for the victory in last week’s Czech Grand Prix – only to end up watching from the gravel trap as rookie team-mate Brad Binder romped to the win.

You cannot underestimate just how much impact Espargaro has had during his time at KTM, driving forward development of the RC16 and playing a pivotal role in turning it into the race-winning machine it has now evolved into.

“He fought like a lion for us on good days and bad” :: Pit Bierer

After the race, KTM motorsport boss Pit Bierer was quick to address that, too, paying tribute to Espargaro’s work despite Binder being the one to lift the trophy at Brno.

“I feel like I’ve got two hearts in my chest,” Bierer told The Race afterwards. “From the work and risk Pol and his crew put into the project, he was the person to deserve the first win.

“He fought like a lion for us on good days and bad, and he was a part of that win. I feel sorry for him.”

But last Sunday’s race could have even greater repercussions for Espargaro’s mood beyond the immediate pain of losing out to Binder after his contact with former KTM team-mate Johann Zarco during the race.

Set to leave the KTM project at the end of the current season and move to Repsol Honda to join Marc Marquez, Espargaor is leaving a bike that he has taken from blank page to race winner, and is switching to a machine that historically only Marquez has been able to be successful on. 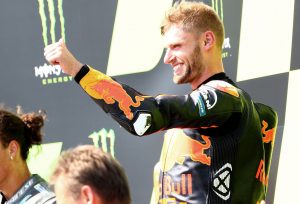 It’s no secret that the current iteration of Honda RC213V is an animal of a bike, needing to be ridden at the limit of its performance to get race-winning speed.

In part that’s no doubt something that drew Espargaro to the team, given the way he’s been able to demonstrate at KTM he’s capable of putting everything on the line when he needs to.

Known for his one-lap pace in particular, Espargaro has been able to make a considerable impact on qualifying so far during his time in KTM by, as Bierer described last week, ‘risking his life for KTM.’

That’ll translate well to the Honda, and it’ll ensure that he’s at least able to extend his record of front-row starts next year.

However, there’s only so long that riders without Marquez’s incredible talent can spend in the danger zone without getting hurt.

Cal Crutchlow has managed to so far take three race wins on the Honda, but it’s also come at the cost of serious injury and a substantial number of DNFs.

But while the question remains to be answered when we see what happens next year, Espargaro is adamant that he’s not over-thinking it right now, instead remaining happy to concentrate on ensuring that he leaves KTM a MotoGP race winner.

“I’ll tell you next year,” he replied when asked by The Race about the prospect of leaving KTM for a potentially worse situation at Honda, “because right now I have no idea!

“Right now Marquez is not there, the top guy in Honda is not there and it’s difficult to say.

“Right now, I’m happy that the KTM is working, but next year is next year…”