The Repsol Honda MotoGP team looks increasingly likely to confirm Alex Marquez’s replacement before he’s raced for the team, with speculation growing that Pol Espargaro has been lured away from KTM to race alongside Marc Marquez in 2021.

Rumours have been circulating for some time linking Espargaro to the second seat at Honda, but these have stepped up a gear. The Race’s sources in the MotoGP paddock have tonight confirmed that it’s looking likely that the switch will be announced in the coming days while MotoGP remains on a coronavirus-enforced hiatus. 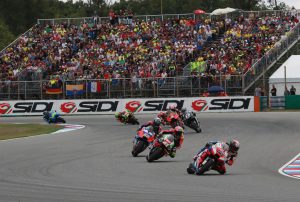 What the new 2020 MotoGP calendar could look like
Read more

The move would mean Espargaro theoretically becomes a solid number two rider behind Marquez, somewhat taking over from the role that Dani Pedrosa held at the team before his retirement

A Honda move for Espargaro, a safe pair of hands and a proven development rider, looks mutually beneficial – as it would offer the 28-year-old a chance to fight for victories not currently available on the KTM RC16.

It would potentially blow the 2021 rider market wide open, too, by forcing KTM and its big-money backers to go on the hunt for a big name racer to replace Espargaro.

KTM is already rumoured to be courting Ducati’s Andrea Doviziozo (who has hinted at unhappiness with Ducati’s financial offer), and it losing Espargaro could be the trigger that moves Dovizioso from Bologna to Matighofen.

That could potentially open the door for Danilo Petrucci to remain with the squad alongside the already-signed Jack Miller – or could even open the door to the return of current Yamaha test rider Jorge Lorenzo.

The younger Marquez brother was always something of a stop-gap measure for Honda, signed at the end of 2019 only after escaping a contract to remain with the Marc VDS team in Moto2 when Lorenzo unexpectedly announced his retirement at Valencia in November.

And while being replaced before even turning a wheel in anger would come as a harsh blow for the junior Marquez, it’s a fair assumption that after 14 days of pre-season testing Honda has collated plenty of data to help make the decision.

He could well remain part of the Honda set-up, too, with a sideways move to LCR potentially on the table at the expense of either Cal Crutchlow or Taka Nakagami. Bringing considerable personal sponsorship, the younger Marquez could be an inviting prospect for team boss Lucio Cecchinello.