'Champion in any other era': Why Pedrosa's return is a big deal - The Race
Skip to content
MotoGP

It’s now been two and a half seasons since Dani Pedrosa retired from the MotoGP world championship, quietly (in typical Pedrosa style) stepping away from the sport at Valencia in 2018 on a day overshadowed, quite literally, by torrential rain that saw the career-long Repsol Honda rider bow out without the credit that he perhaps deserved.

Because for a rider who never quite managed to achieve his ultimate goal and become MotoGP world champion, it’s hard to underestimate the impact that Pedrosa had on the series since bursting into action as a diminutive 125cc rider in 2001 – and the impact he continues to have, as evidenced by KTM’s push to see him wildcard at its home race next month in his role as test rider.

Tiny at only five foot two (157cm), the Spaniard was made for the smaller class machinery and over the early years of his career absolutely stamped his authority on both classes by taking the 125 championship in his third year of trying before progressing to 250cc and winning back-to-back titles as a rookie and sophomore.

MotoGP beckoned in 2006, and with his card marked as MotoGP’s next big thing there was only one place for him to naturally fit in: at Repsol Honda, the ultimate team for any aspiring talent and in need of someone to take on the might of Valentino Rossi and Yamaha.

It was instantly apparent that Honda made the right choice, too, as Pedrosa started chalking up successes from the very beginning.

A podium finisher in his first ever race after coming home in second behind Loris Capirossi at Jerez, it only took another three races until Pedrosa recorded his first victory at Shanghai.

From then on, Pedrosa’s career followed something of an established pattern that saw him become a regular race winner – he would take a victory in every season of his 13-year Repsol Honda career bar the final one in 2018. 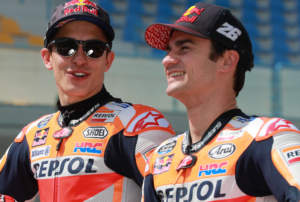 However, despite coming close to the championship on multiple occasions, he never quite managed to lift the crown, cementing his legacy along the way as perhaps the greatest rider never to do so.

Pedrosa’s greatest chance to take the title arguably should have come in 2007, with the introduction of MotoGP’s new 800cc machines. These were smaller, lighter and seemingly designed almost entirely for the lightweight Pedrosa, and his role by then as Honda’s next big talent meant that the new RC212V was literally made for him.

But it wasn’t to be, thanks in large part to the thing that would define Pedrosa’s career; the emergence of someone just a little bit better, in the shape of Ducati’s new signing Casey Stoner, who immediately bonded with the Italian bike and went on a winning spree to take the crown by a whopping 125 points from Pedrosa.

Jul 26 : Livio Suppo: How to win MotoGP titles with Ducati and Honda

In fact, in any other era of MotoGP, it’s hard to imagine Pedrosa as anything but a multiple-time world champion. It’s just unfortunate for him that his rise to the top came at the same time as a host of others were fighting for that spot – and it would be names like Rossi, Lorenzo, Stoner and, latterly, Marquez who would keep him from ever achieving the ultimate prize.

Of course, there’s another factor that also kept Pedrosa from finding the consistency needed to win a championship; a proclivity for injuries that saw him chalk up an almost-incredible amount of broken bones and surgeries over the course of his career.

The list reads more like something from a medical textbook than a sporting record. A fractured left foot and right ankle in 2003, a broken right arm in 2005, broken toes in 2006, a smashed-up hand in preseason testing for 2008 followed by broken fingers and a wrist later in the year. A cracked femur in 2009. A broken left collarbone in 2010, right collarbone in 2011, left again in 2013 and right in 2016 (along with a broken leg and foot), and finally a broken wrist in 2018.

In fact, given the huge list of injuries he suffered, and the complications from them (arthritis, ligament and tendon damage, arm pump), it’s really no wonder that, faced with an increasingly difficult-to-ride Honda, Pedrosa stepped away from the class at the end of 2018 aged only 33.

There was a chance that the end of his Honda career wouldn’t be the end of his time as a full-time rider, with a juicy Petronas Yamaha offer dangled in front of him – an enticing prospect for many who wanted to see Pedrosa’s smooth style on the equally comfortable M1 machine.

It wasn’t to be, with the Spaniard instead opting for retirement, a decision that opened the door for Fabio Quartararo and began a whole new chapter in the MotoGP history books.

But retirement didn’t mean the end of Pedrosa’s time as a rider – and the fact that Honda managed to allow him to slip away to bitter rivals KTM will perhaps be something that the Japanese firm looks back on with regret in a few years’ time.

Joining former crew chief Mike Leitner, now the technical boss of KTM’s MotoGP project, Pedrosa stepped right into a no-pressure role as test rider for the Austrian firm and has taken to it like a duck to water after a decade and a half of largely having his feedback ignored at Honda.

With KTM’s corporate culture all about building a bike that works for the riders, rather than the Honda approach of making a machine that’s as fast as possible then finding a superhuman talent to ride it (a strategy that has royally backfired in 2020 and 2021 with Marquez’s injury and long recovery), it’s easy to see the fruits of Pedrosa’s work.

KTM doesn’t simply turn up to ride around at the back, and in his time there it’s gone from a squad who celebrated wet conditions podiums like a world championship to consistent race winners at the hands of Miguel Oliveira in particular.

But, according to KTM’s bosses, we’re yet to see the absolute best results of their collaboration.

KTM head of motorsport Pit Beirer told The Race earlier this year that the wildcard appearance is the culmination of their time together so far.

“He doesn’t want to prove something because he stopped his racing career in peace, happy and almost healthy, but for bike development he’s done some great things,” said the Austrian of Pedrosa. “But a race is different, and with this transition bike he could influence it a lot.

“The next bike will definitely have his signature on it and he has huge interest in the bike performing.