Aug 17 2020
By Valentin Khorounzhiy
No Comments

A slow start from the front row dropped Quartararo to as low as ninth in Sunday’s race, and as he went about recovering, he ran into the gravel at the downhill Turn 4 right-hander while chasing Miguel Oliveira.

He rejoined in last place and had to take the second start – following a red flag caused by Johann Zarco and Franco Morbidelli’s massive crash – in 20th place, fighting his way through to eighth over the remaining 20 laps.

“We can’t lose easy points like this because we have a technical problem” :: Fabio Quartararo

“It was really difficult because we had a technical problem during the first race and in the second,” a disappointed Quartararo explained.

“In the first we went straight in corner four, I was riding quite easy but in the lap just before I started to feel a soft brake, and on the lap after actually I braked in the same place as normal during all the weekend, and my brake was like a clutch.

“I took it by four fingers, trying to stop the bike, it was really dangerous.

“It was exactly the same in the second race. So, during 18 laps I was trying to do my best, trying to feel the confidence because sometimes when I was behind riders for sure I had no brakes.

“But when I was a little bit alone, let’s say when I overtook Aleix [Espargaro], I had one second to [Danilo] Petrucci, and I recovered really fast. So when I was alone was OK but still, the confidence is not good.

“And it’s a shame because we can’t lose easy points like this because we have a technical problem. It’s really important to score as maximum as possible. It is what it is and we need to look forward, because next week we will have another one.”

Quartararo’s Petronas SRT Yamaha team got to work on his bike during the red flag, and the Frenchman believes the disc and calipers were replaced – but the issue, which made Quartararo “really nervous” at the brake-intensive Austrian venue, persisted. 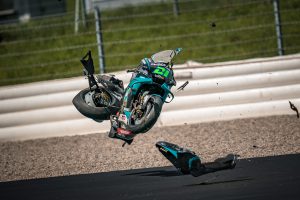 “That’s why I’m worried. Because next week we have another race here and I don’t want to ride in the same way,” he added.

Quartararo said this was the first occurrence of such a problem during his MotoGP career, and dismissed suggestions that it could’ve been caused by him braking harder to try to compensate for the Yamaha’s top speed deficit.

“Honestly, during all the weekend I braked really, really hard,” he said.

“Maybe it could happen after 10 laps in the slipstream, but not two laps, and not after two laps in the second race. And that’s something we don’t understand”.

Though he didn’t believe he would’ve had the pace to fight for the podium, Quartararo reckoned he would’ve likely finished fourth with a clean race.

Asked by The Race whether his obvious disappointment was more down to the five points lost through finishing eighth instead of fourth or the fact the issue was not yet understood, he said: “Both, both. Of course it’s not a lot, but when you check also last year, [Brad] Binder with Alex Marquez, at the end the [Moto2] championship was won by three points.

“So five points can change a lot of things.

“So now we have a problem of brakes that we need to check for next week, and five points fewer.

“OK, we will not say that I [would’ve definitely] finished fourth – but that was our pace.

“You never know, maybe you have a fall, you crash, and you lose many points. But our pace was to be there.”