Apr 4 2021
By Simon Patterson
No Comments

It might have come as something of a surprise to some when MotoGP rookie Jorge Martin snatched pole position for today’s Doha Grand Prix in only his second-ever attempt at the feat.

But, with a long-standing reputation as one of the series’ next big stars and an incredible past record of qualifying performances, what the Pramac Ducati rider achieved is no shock to experienced paddock watchers – and indeed marks only the start of the 23-year-old’s impact on the premier class.

His exceptional achievement at the Losail International Circuit, taking pole position from teammate Johann Zarco by 0.157s, means that he adds to a very exclusive list of MotoGP riders.

Following in some famous footsteps! 💪@88jorgemartin becomes the third rider to take pole in his second #MotoGP race, just one more than @lorenzo99! 👏#DohaGP 🏁 pic.twitter.com/gqgh0RoAXm

Joining Casey Stoner and Jorge Lorenzo as riders who have taken a maiden pole position at Qatar, Martin now also sits alongside Stoner and Marc Marquez as riders to secure P1 at only their second-ever races.

But you could’ve seen Martin’s breakout pole coming. Ten times a pole position man in his 2018 Moto3-winning campaign, his record is a remarkable 22 percent of poles for his 100 grand prix races to date – a number comparable to the likes of Lorenzo and Stoner.

It also sits in stark contrast to that of reigning world champion Joan Mir, who has taken only two pole positions in his entire 87-race grand prix career. For comparison, Martin took nine poles when the pair raced against each other in 2017, when Mir went on to take the Moto3 title.

“About Jorge’s qualy, congratulations,” Mir said on Saturday, before adding mischievously: “I already knew that Jorge was always really fast in pole positions, in Moto3 normally they [he and his team] took the pole positions and I won the races.

“So I already knew that he’s really fast in one lap, he’s doing a great job and the [other] Ducati riders have to be really angry, probably.”

“From Moto3, I have a really good time attack,” Martin said when asked by The Race to explain that skill. “I can put all my energy to make one lap, and normally I’m quite fast.

“For sure MotoGP is another level and it has the best riders in the world, so I can’t really believe it in my second race.

“But I know that I am a fast rider and for sure that at some point during this season I could take some pole positions. Not today, though!”

That’s a comment that fits with Martin’s personality, too. Self-assured and confident almost (but not quite) to the point of arrogance, his combination of swagger, personality and prodigious talent are what have made him stand out since the earliest days in the MotoGP paddock. 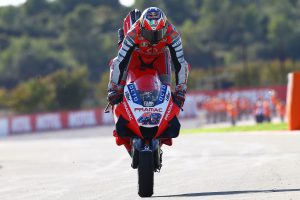 “You were born to ride a motorbike,” Jorge Lorenzo told him in 2018 when Martin won the Moto3 title.

Martin is another graduate of Lorenzo’s father’s race school (along with Mir), and the five-time world champion has been a keen observer of his fellow Mallorcan’s career as he grew up.

He therefore turned up to Martin’s championship-winning press conference to heap praise on him.

“I’m sure that you will do this again in the other categories,” Lorenzo continued, “because you have the talent.

“You are a great guy and you work hard, and you have stood out because of that. It would have been unfair if you had not won the title.”

That’s quite a CV reference, and it’s made all the more poignant by the fact that Martin’s career nearly stalled before it even began. Though he hails from a modest family and was fully backed by them at every step, motorcycle racing is nonetheless not a cheap sport to start out in, and Martin’s admitted in the past that he was almost about to call it all quits until he was offered an olive branch in the shape of the KTM Red Bull Rookies’ Cup.

Joining the series in 2012, he finished runner-up to Karel Hanika in 2012 and won it in 2013, kickstarting a career that saw him make his Moto3 debut in 2015 as part of Aspar’s storied list of rookies.

Starting out on an uncompetitive Mahindra machine (just like fellow MotoGP riders Pecco Bagnaia and Luca Marini), by 2017 Martin had established himself as a title contender and it’s been an uphill trajectory since.

Struggling in his first year in Moto2 on an uncompetitive KTM and arguably losing the chance to fight for the title last year when a positive COVID test robbed his season of all momentum, he’s nonetheless ticked every box he needed to en route to a MotoGP ride – and now he’s secured a fast bike in the premier class, it’s all systems go.

Despite that, though, he goes into today’s race adamant that it’s still the time to learn rather than to go crazy despite the amazing qualifying performance.

“It’s just Saturday, and tomorrow is the difficult part,” he stressed after qualifying. “I learned so much last week from the other riders, and trying to manage the tyres is the point I have to focus on and work on. We’ve done a great job and we’re improving, but for sure my target isn’t to win.

“I want to learn and to improve, to keep the same pace the whole race, and to not make mistakes. Hopefully by the middle of the race I still have enough tyres left to battle for the top six at the end. That would be super good.”