Sep 18 2021
By Valentin Khorounzhiy
No Comments

Marquez, second to Bagnaia at Aragon last time out, fell at the Turn 14 sharp right-hander in the final minutes, having sought to use reigning champion Joan Mir as a reference to follow for much of the session in an ultimately unsuccessful bid to avoid the first qualifying segment.

Having struggled so noticeably in the wet on Friday, championship leader Quartararo again found dry conditions much more to his liking, becoming the first rider to dip below 1m32s this weekend as the customary late-FP3 time attacks kicked off.

But Bagnaia then found an extra four hundredths with a 1m31.936s effort, and Quartararo’s late efforts to reinstate himself in first place were ultimately for naught.

Bagnaia’s works team-mate Jack Miller had to have his left eye cleaned during the session, but managed to finish third in the end, with Mir completing the top four. 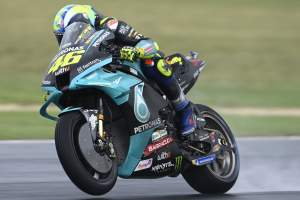 Friday pace-setter Maverick Vinales continued his strong form for Aprilia, improving on his FP1 benhcmark with ease. Though his late efforts to improve looked to have been thwarted by yellow flags, he comfortably booked a Q2 spot in fifth.

Team-mate Aleix Espargaro initially had his best lap deleted for a yellow flag infringement, which demoted him out of the top 10 and into Q2. The same fate also befell LCR Honda’s Takaaki Nakagami.

Unlike Nakagami, however, Espargaro eventually had his lap reinstated and took sixth place in the session, re-joining the Q2 roster at the expense of Ducati wildcard Michele Pirro.

The remaining riders to make Q2 automatically were Alex Rins (Suzuki), Pramac Ducati duo Johann Zarco and Jorge Martin, and Pol Espargaro, who is the only Honda rider to ensure a place in the pole shoot-out after having followed Quartararo on his fastest lap.

Beyond Marquez, there were late falls for KTM rider Miguel Oliveira and Tech3 KTM pair
Danilo Petrucci and Iker Lecuona, as well as a very slow one for Honda wildcard Stefan Bradl a few minutes prior.

Petronas Yamaha’s Valentino Rossi had had an earlier mid-session crash at the Turn 13 right-hander, tipping down on corner entry.

The home favourite is up on his feet and heading back for his second bike! 💢#SanMarinoGP 🇸🇲 pic.twitter.com/OeKjIiQCrN

He was only 19th in the end, just a couple of hundredths up from new team-mate Andrea Dovizioso.