Aprilia MotoGP boss Massimo Rivola has told The Race that he’s keen to continue working with the late Fausto Gresini’s team in the future, as the Italian manufacturer prepares to become an independent outfit for 2022 and to end its seven-year relationship with its partner team.

Aprilia rejoined the premier class in 2015, linking up with Gresini Racing to rely on the veteran team boss’s expertise in Grand Prix racing. That relationship has remained since, with Gresini providing some functions like mechanics and hospitality while Aprilia builds and develops the bike.

The squad already announced last season that its plan for 2022 was to strike it out alone as an independent, Aprilia has nonetheless been open about its plans to try and retain Gresini within its operation – as it also prepares to launch a satellite team.

“First of all we need to become an official team for next year,” Rivola told The Race.

“In the past, we had some arguments with Fausto because it felt like we were living in someone else’s house and vice versa. It’s part of the situation, and there’s nothing wrong with that.

“We know them, and when you work with someone for many years… I was born in the same city, my family is still there, and maybe I am too hot about it. But when you know the people and you work with them, you know they are a really good bunch of guys.”

That’s despite interest from other directions, too, with Rivola confirming the rumour that there has in fact been provisional talks with Valentino Rossi’s VR46 team about linking up together in the future.

“I was asked if I would like to work with VR46, because of course having the name of Valentino Rossi with Aprilia would be great, but we haven’t spoken in a long time,” he said.

“If you asked me what my first choice was though, it would be to continue working with Gresini, and I think we have potential.”

However, all plans remain on hiatus, following the tragic death of Fausto Gresini earlier this year from COVID-19.

Saying at the team launch in early March that Aprilia wanted to give the Gresini family and team time to decide on their future plans, that situation hasn’t changed – even if Rivola is aware that the clock is ticking. 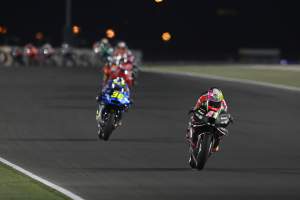 “I know that time is running out, because they have to decide and we have to prepare,” said Rivola.

“There are many things to do. I don’t want to push the Gresini family too much, since I think it hasn’t been much time passing since he passed away.

“It’s a very difficult situation and I want to respect his family the most, while still balancing it with time running out.

Making things even worse for the team principal is the newfound success of Aprilia.

Closing the gap from its rivals significantly over the pre-season, the 2021 RS-GP is the most competitive to date – and Rivola says he wishes that Gresini could have seen for himself after a number of years where the team struggled.

“One of the things I regret the most is that we were not fast enough to show Fausto our growth during this year,” he said.

“And I’m sure that after so many years being behind he would have enjoyed our possibly good championship this year.

“When I say good, at least we are around there, and if we respect our target of being within ten seconds of the leader sooner or later we will get rewarded.”