For the purposes of this article – which was inspired by The Race Member Fearghus Butler – we’re covering the whole of the island of Ireland, much as is done in Rugby Union, so drivers from both the Republic of Ireland and Northern Ireland appear in this ranking.

Just 11 drivers from the Emerald Isle have attempted to qualify for a world championship grand prix, and while there’s no denying the talent, quite a lot of the names on this list failed to get the machinery and opportunity their talent deserved.

As ever, the ranking is based on their performance in F1, not their potential, nor what was achieved in other categories.

Personally, I found this one of the most interesting and tricky lists to compile, with compelling and competing arguments on many sides for every position. So please let us know your opinions in the comments below – it should be a fascinating debate.

The non-championship status of the 1980 Spanish Grand Prix means that Kennedy didn’t officially start a world championship Formula 1 and is thus condemned to the bottom of the list.

He was a championship contender in British F1 but had the misfortune of joining Shadow as the team was in its death throes. He was faster than a young Stefan Johansson and held his own against Geoff Lees after the Swede was replaced, but it was a futile effort as the team was doomed.

After going on to a successful sportscar career, Kennedy would play a key role in nurturing young Irish drivers, not least through his role in A1 GP’s Team Ireland, which reunited him with Teddy Yip Jr, whose father’s Theodore outfit had taken over the Shadow project for its final outings.

Watch Kennedy in action in the 1979 Aurora F1 race at Brands Hatch:

Ranking drivers like Kelly, who entered a self-run Alta in a pair of British GPs in the early 1950s, is almost impossible.

On the face of it, being 35s off the pace in qualifying, as Kelly was for the 1951 Silverstone race, is a pathetic showing, but the disparity in equipment, budget and professionalism in that era is an anathema to those of us brought up on a diet of mega-budget teams with multi-national backers and millionaire professional drivers.

While Kelly was never going to be world champion, he used his success in business to fuel his passion for racing, and who can argue with that?

Watch highlights of the 1951 British GP:

Like Kelly, ranking Titterington on the bases of a sole appearance in the 1956 British GP is a fool’s errand but qualifying just a second off Connaught team-mate Archie Scott-Brown, elevates him above the status of enthusiastic amateur.

In fact, Titterington’s showings in non-championship events such as the International Trophy and a fourth place in the Targa Florio suggests there was some serious potential that was ultimately unfulfilled.

Watch highlights of the 1956 British GP:

Unfulfilled potential is a common theme in this list. Despite little or no money, Magee had carved a handy reputation for himself in single-seaters (being enough of a cult hero that motorsport scribe Damien Smith is named after him).

He did a solid job in a one-off for Williams in the 1976 Swedish GP, qualifying a couple of tenths off team-mate Ian Scheckter, and bringing the car home.

He failed to make the grid when called up for the 1977 French GP in an elderly RAM Brabham, but he was miles quicker than Loris Kessel in the sister car.

Watch highlights of the 1976 Swedish GP:

It’s easy to draw comparisons between Byrne and other mercurial Irish talents George Best and Alex Higgins, but as Mark Hughes details expertly in his must-read Crashed and Byrne book, had Tommy been better advised, or more importantly, been able to control himself, he had all the talent needed to succeed at the very highest level.

That his F1 career amounted to just two starts for Theodore is a travesty.

Check out the trailer for Crash & Burn here:

Who knows what Acheson might have achieved had a double leg-breaking crash in a Pau F2 race not interrupted a career that had brought multiple Formula Ford titles and an F3 title shot?

Following his recovery, he was invited to take the sole RAM entry for the second half of the 1983 season, for which he failed to qualify for all bar the South African GP.

He was recalled to the team following Manfred Winkelhock’s death two years later, but the unreliable, and unwieldy RAM 03 gave him little opportunity to shine.

The fact he went on to be a fixture of Jaguar, Mercedes and Toyota works sportscars line-ups tells you more about his talent than those three F1 starts.

Watch the Pau crash that could have stopped Acheson fulfilling his true potential:

There’s not even the faintest hint of an Irish lilt in Firman’s accent, but he did race on an Irish licence thanks to his mother’s ancestry.

A Macau F3 win and the 2002 Formula Nippon title are sound junior single-seater credentials, but 2003’s Jordan EJ13 was an unfitting weapon for an attack on Formula 1.

Up against Giancarlo Fisichella in the sister car he was comprehensively outpaced, but he did at least manage to bag a point at the Spanish GP.

Taking the car for a demonstration run around the Macau Guia circuit at the end of the year was probably his most memorable outing.

Watch Firman’s lap of Macau in an F1 car!

Daly’s frontrunning exploits in Formula 2, paired with some impressive F1 outings for Ensign, earned him a call up for Tyrrell towards the end of 1979.

His 1980 season started strongly with fourth place in Argentina, but over the course of the season he was usually outpaced by the rapid but inconsistent Jean-Pierre Jarier. 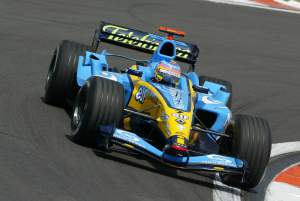 A switch to March for 1981 was little short of a disaster, and by moving to Theodore, Daly appeared set for another season of toil in 1982.

But with Williams left in the lurch, Daly received one of the most unlikely call-ups to a race-winning team in F1 history. He could have won the farcical Monaco race, but in reality he was nowhere near team-mate Keke Rosberg’s pace, and he slunk out of F1 to move to America where he enjoyed a fruitful CART career and subsequent switch to broadcasting.

Donnelly was a leading light in F3000 when he burst onto the F1 scene at the 1989 French Grand Prix, outqualifying Arrows stalwart Eddie Cheever by 0.8s as he stood in for Derek Warwick.

He would be paired with ‘Del Boy’ at Lotus in 1990, and there was virtually nothing between them despite the gulf in experience, and the 102’s general lack of pace.

But what appeared to be a promising career was cut tragically short when he suffered a horrific accident at Jerez that he was lucky to survive.

Turn it up and go onboard with Donnelly for a lap of Estoril with V12 Lamborghini power:

Few F1 debuts are as memorable as Irvine’s, where he incurred Ayrton Senna’s wrath by twice unlapping himself while on the way to sixth place.

A full-time Jordan seat was inevitable after that and together with Rubens Barrichello he formed a formidable partnership for a midfield team.

Despite this, he was a surprise choice for the Ferrari seat next to Michael Schumacher in 1996 (check out the excellent Bring Back V10 episode on this saga, embedded above), but he turned out to be a solid foil for the German megastar, not quick enough to challenge him and not political in a destabilising way behind the scenes.

Schumacher’s injury gave Irvine a shot at the 1999 title, but he was nowhere when it mattered in the Suzuka finale as Schumacher battled would-be champ Mika Hakkinen all the way.

A megabucks move to Jaguar boosted Irvine’s bank balance more than it did his reputation.

One of the all-time great overtakers, ‘Wattie’ would have been a worthy champion in 1982 if his luck had held mid-season.

His exploits in the privateer Hexagon Brabham had marked him out as a hot young thing, but a move to Surtees threatened to derail that.

Teaming up with Roger Penske gave him a chance to shine and score a breakthrough victory in Austria 1976.

When Penske withdrew rather than expand to two cars in 1977, Watson switched to Brabham, where he was rapid in the unreliable Alfa Romeo-powered car. He stacked up well against Niki Lauda when the Austrian superstar joined the team in 1978, but he found McLaren at a low ebb following a move there in 1979.

The arrival of Ron Dennis, John Barnard, and the MP4/1 gave him frontrunning (if underpowered) equipment, which he nearly converted into the title in ‘82.

Again he was evenly-matched with Lauda and was perhaps unlucky to lose his seat – and place in F1 – to Alain Prost for 1984. The less said about his under-prepared one-off return in 1985 the better.